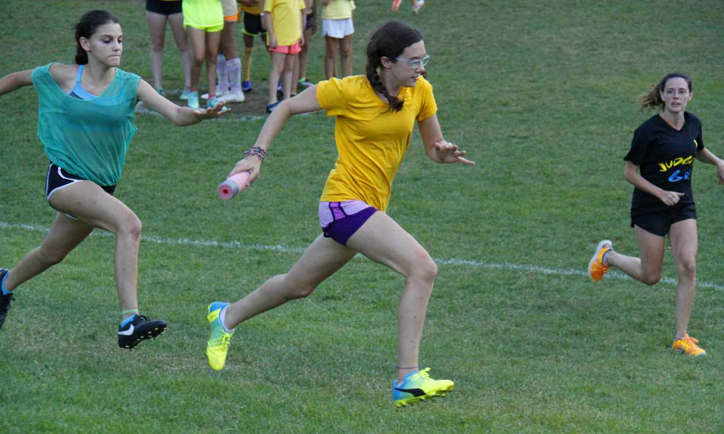 Why Capture the Flag is one of our campers’ favorite games 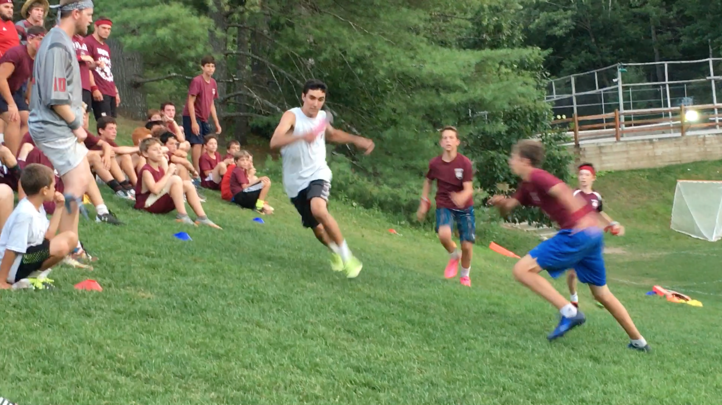 We are now in day #2 of our Summer 2016 Color War. In both Kenwood and Evergreen our campers have been playing their hardest, and nowhere has this been more evident than in our games of Capture the Flag.

Quite simply, our campers love the way we play this game, and everyone looks forward to it during Color War. The structure of this activity is likely different than what you grew up playing. In fact, I’ve never heard of another camp playing it quite like this.

In most iterations of this game there’s one flag on each side, and it’s usually hidden. Should a team steal the other side’s flag and bring it back over the line that team wins. That’s not how we do it at all.

We play it on our beloved field known at The Hollow (the same place where we wrestle in Jell-O and have our annual music festival). We divide the Hollow into two sides with a white line down the middle, and each half contains 5 circles. Each circle houses a flag with a specific point value (5, 10, and 25 points in Kenwood, 10, 20 and 50 in Evergreen), and has two guards watching their flag. There are also two defensive “Rovers” who aren’t guarding flag circles, but can run anywhere to stop anyone from scoring. Campers from the other team try to run in, sneak the flag out and get it across the center line without getting tagged. So unlike in most other versions of Capture the Flag, in ours there can literally be 10 different plays taking place simultaneously, and repeatedly. It’s fun, incredibly chaotic, and super exciting to watch.

So the contest actually becomes less about one runner’s stealth and speed, and more about how the campers work in concert. Or, how successfully the defensive players work together to stop an oncoming attack.

I should also explain that there is also a jail located at each X. If you get caught you have to lie in the grass, touching the feet of the person in front of you. If someone on your team crosses into the other side’s territory and tags anyone on the jail line then the whole prison is freed. At any time a wave of 2 dozens campers can suddenly be released onto the field, adding further confusion on the field.

There’s an important role for every person on the team. Everyone takes turns guarding, roving, running, or trying to free the jail. The coaches also coordinate runs from the sidelines by shouting out code words that mean different strategic moves.

Does it now make sense why this is one of our campers’ favorite games that we play each summer? 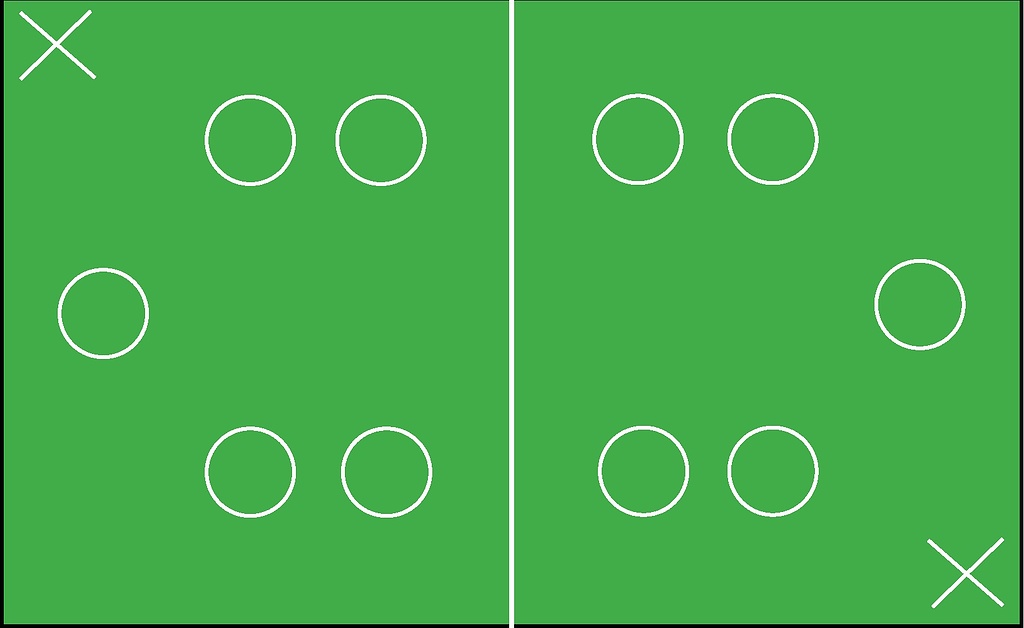 Tonight was Kenwood’s night to play our beloved game. True to the K&E way, our boys played their hardest, and yet did so with fantastic sportsmanship. None of our judges are professional Capture the Flag referees, and often the calls are extremely close. But the intensity was about all about trying to help their team, and everyone had an incredibly fun time playing.

I love watching how our boys use every ounce of their energy to score points. All night long they sprinted at full speed, dodged and weaved like NFL running backs, and leapt like superheroes across the finish line. After years of playing this game many of our campers actually use the elevated walls of the Hollow as a chance to pause, face down a flag guard, and then gain just a little bit more speed on the decline. I also love seeing a camper not only score, but do so for the first time. The thrill of that little victory is felt by every coach and judge on the sidelines. Campers from every single age group managed to score for their team, including two of our littlest guys who scored 25 point flags! 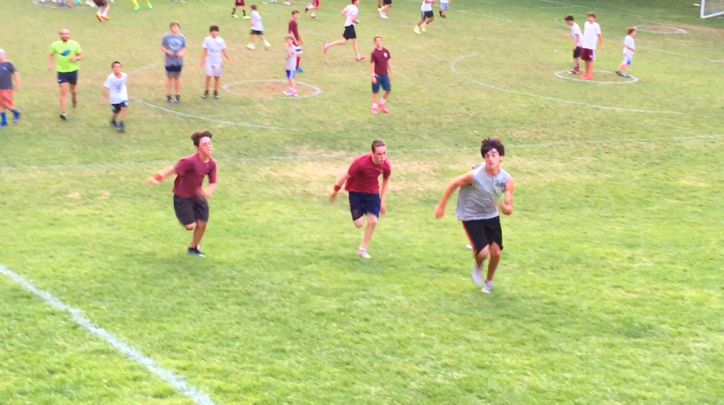 One of my favorite things about this game is how much is brings the teams together. Before each period, the players and coaches come together to hash out their plans. They discuss where and how to run, who is assigned to what roles, and how vital each member of the team is to the overall effort. This was certainly true last night in Evergreen. 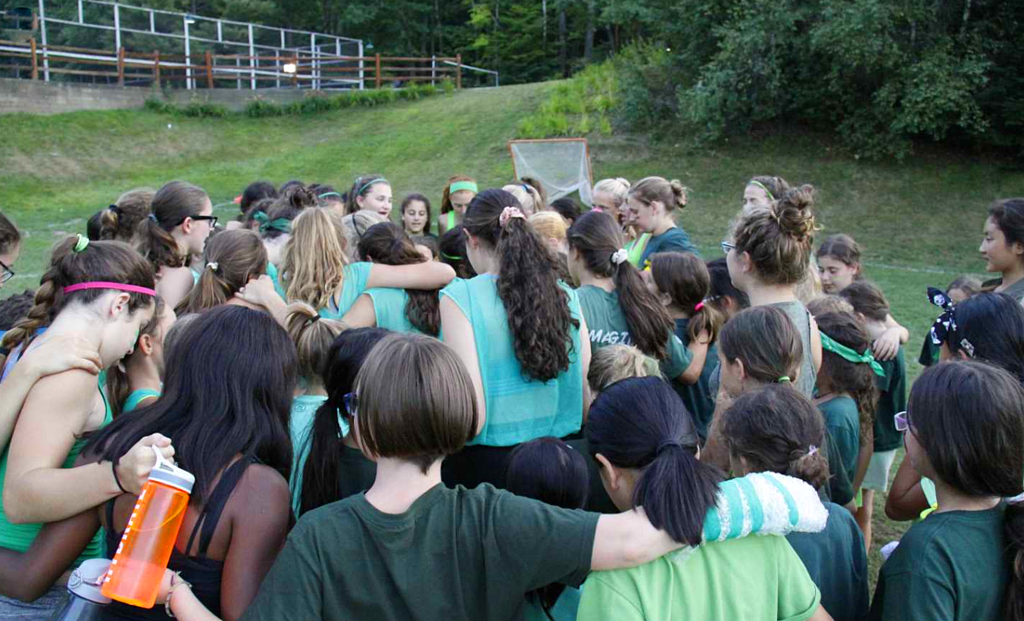 At halftime the Green team was down by over 400 points. When they huddled together their coaches offered encouragement and support, and also presented a new plan for victory. Full of team spirit, the girls in green ran up the score quickly, and in the final minute of the 4th quarter the teams were tied.

Just as Deena was counting down the final seconds a young woman from Wayland, MA came streaking from the backfield with a 50-point flag in her hand. With some careful dodging and weaving she crossed the finish line with only seconds to spare. As the whistle blew her coaches realized that they had won by a single flag, and the entire team mobbed her with hugs in celebration.

This is what Color War is like at our brother-sister overnight camp. At every activity we see our campers filled with team spirit, giving it their all, looking for the opportunity to succeed in ways that they never thought possible. This is Kenwood and Evergreen.

Speak with one of our directors