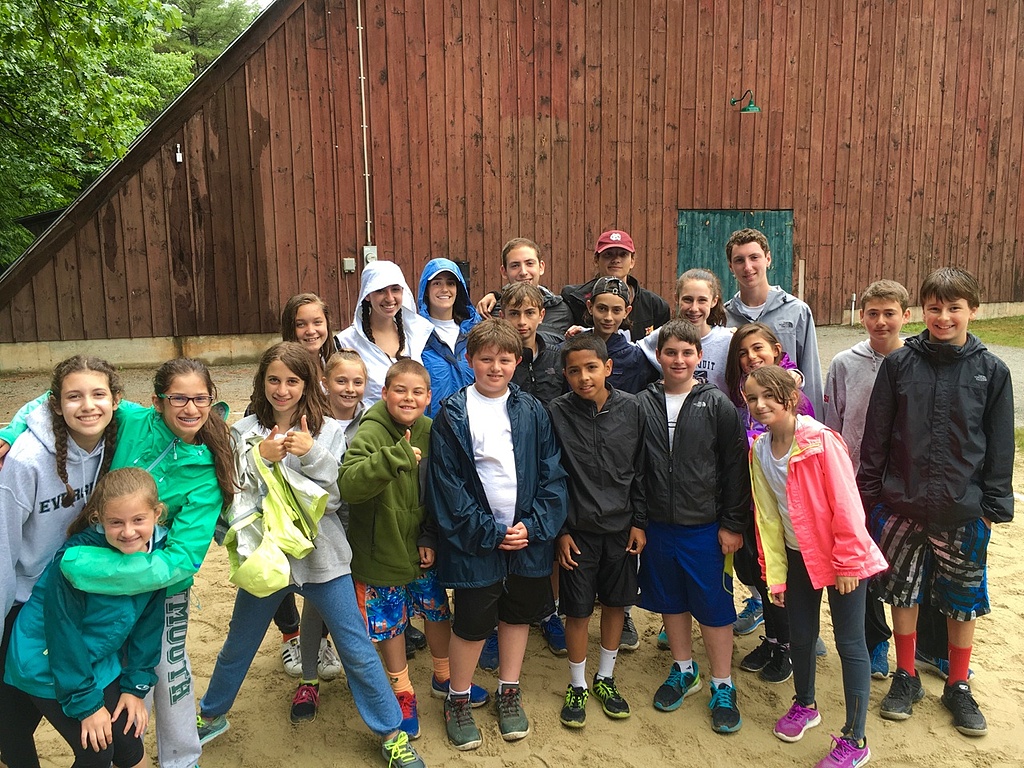 When it rains at overnight camp we have the greatest time ever!

Camp Parents ask me all the time what do you do when it rains? The answer is very simple: we play outside and it’s the best time ever!

Last night I posted a couple of photos on our Facebook wall of our campers and counselors doing just that. In the mid-afternoon it started with a light drizzle, and by 4pm we were in the midst of a full on downpour. How our different age groups made the best of this rainy afternoon says a whole lot about the resilience of our kids, and all that they are learning this summer.

Our Evergreen Junior Campers went back to the lodges and created the wackiest, silliest, craziest costumes that they could. Then they marched to our theater and put on a dance party that shook the foundation. All afternoon they were cheering and showing off their best dance moves. Afterwards, as they were heading back to the bunks, they used the time to run around in the rain laughing and hugging each other. About 4 minutes after I took this photo they were drenched head-to-toe. 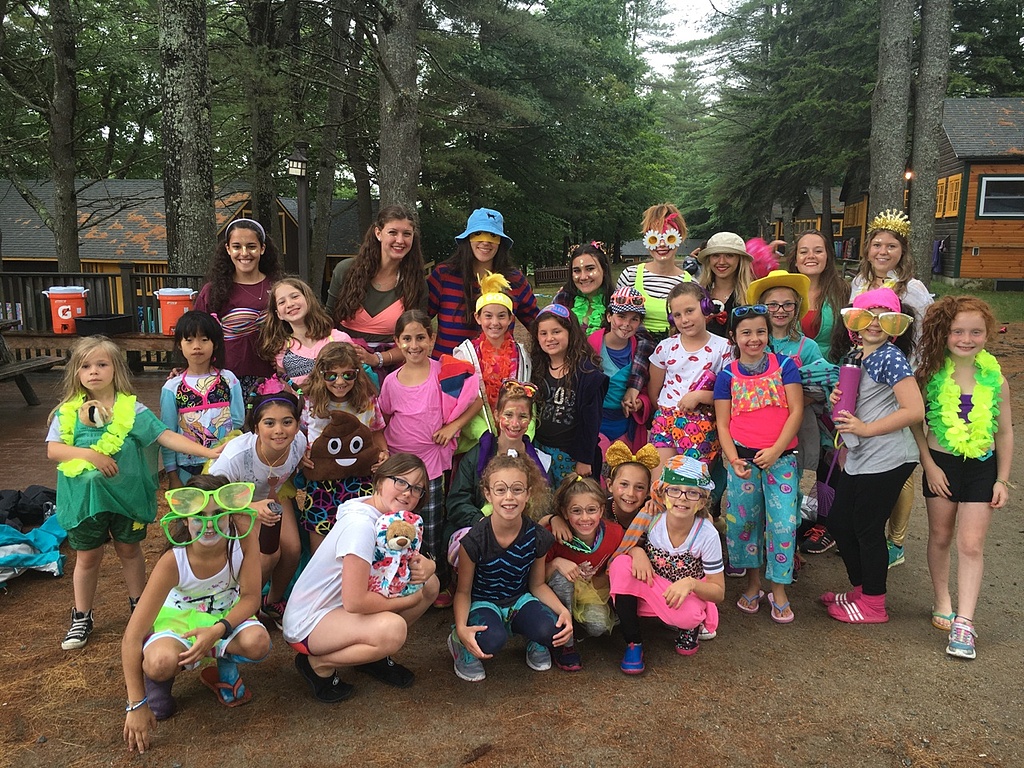 Our boys were just as excited to spend playing outside. Yesterday was supposed to be an annual event called “Spirit Day”, where our entire community plays another camp in sports all day. Sadly, the other camp wasn’t interested in getting wet, and they cancelled. So what do you do when it rains at overnight camp and your plans suddenly have to change? Head Counselor Walshy and the Unit Leaders quickly split the entire camp into two teams (nicknamed “Team Scott” and “Team Jason”). All afternoon our boys got as wet as can be playing softball, football, soccer, and basketball. 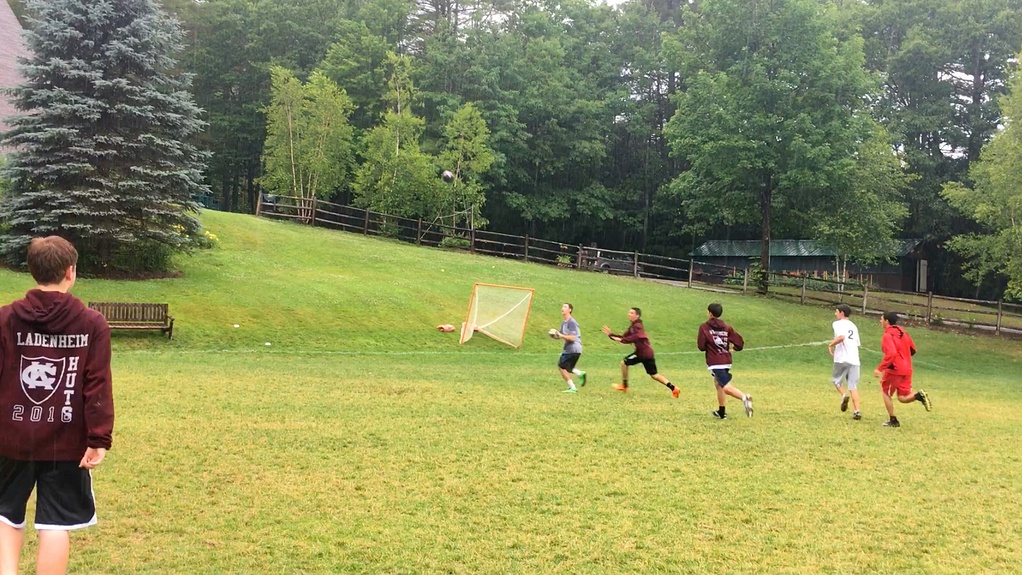 And when I say that they were wet I mean that they were SOAKED. We all looked like we had just stepped out of the lake. Most of my pictures didn’t come out because there was so much rain on my lens. In true K&E fashion both teams played their hardest, but also made sure to be the best sports possible. They played out of pure love for the games, and because how often in life do you get to spend all day running around with your best friends in a rainstorm? 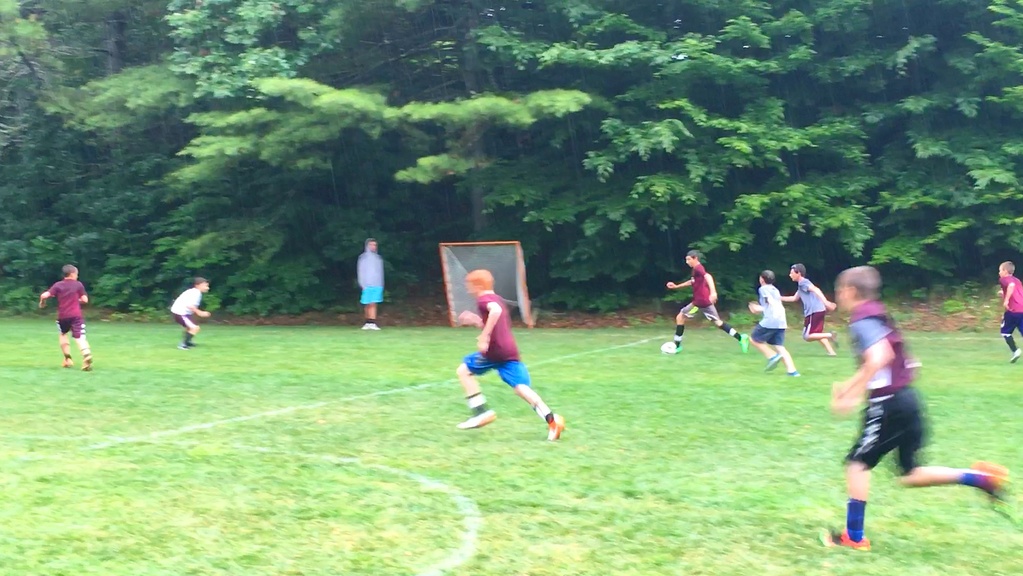 As the games were winding down Scott was hanging out with our Junior Camp boys and he asked them what they thought about the afternoon. He was a bit startled when the group shouted at him “this was the best day of the summer!” And I think that they are right.

We try so hard to teach our community members to make the best of any situation. Yesterday it went into practice, and with almost no guidance from us, our counselors and campers figured out how to be resilient, adapt, and have more fun than if they day had gone as planned.

By dinner everyone was in the silliest mood. Our oldest boys and girls — called Hut 6 and Juniper — found a new way to make the entire camp laugh at assembly. First our girls arrived in our boys’ camp uniform, and then the boys showed up in our girls’ camp’s shirts. The little kids thought that this was the funniest thing ever, and it was hard to get through assembly there was so much laughing going on.

In the dining hall they switched tables, and during dessert the boys stood up and led Evergreen in their cheers, and the girls did the same for Kenwood. This is the sort of leadership our campers learn during their summers at our overnight camp in NH. Sensing a need to lift the mood, our 15-year olds figured out a way to be silly and irreverant to help ensure that everyone kept on having a great day in spite of the weather. 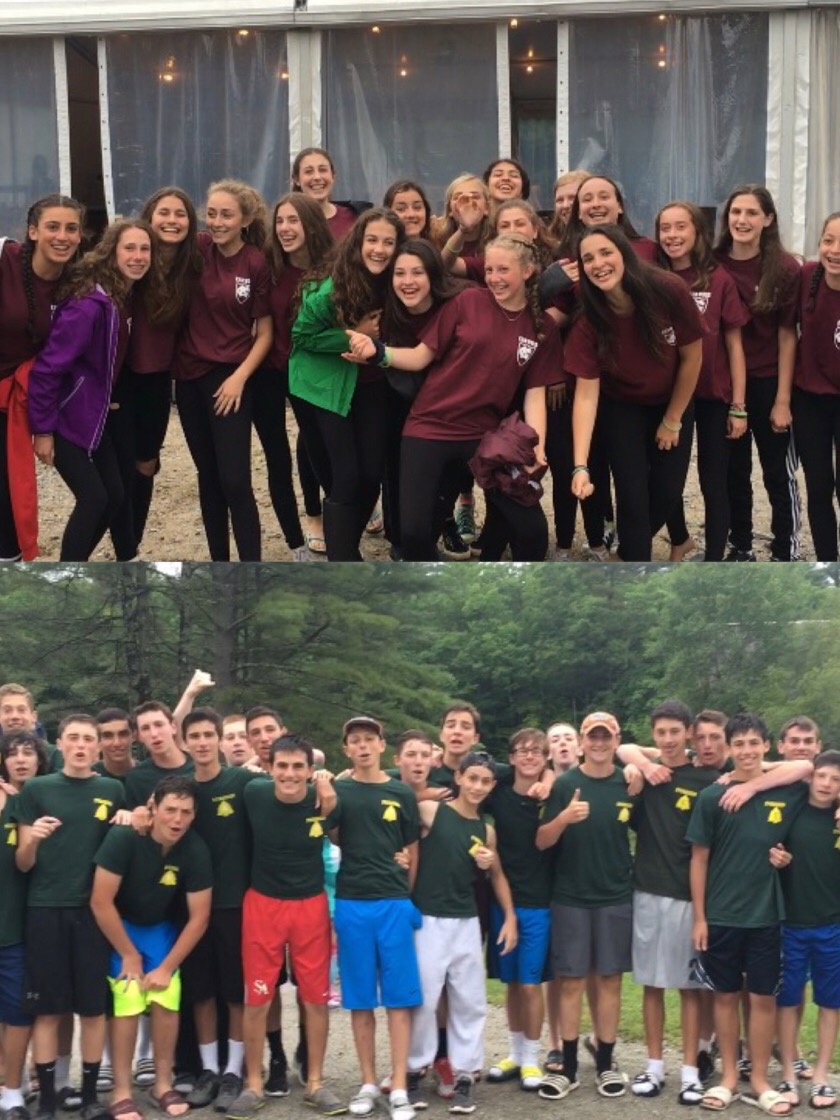 RELATED: A summer at our overnight camp teaches you about healthy risk taking

This morning it was more of the same. As we arrived at breakfast assembly there were traffic cones and caution tape wrapped around a chalk outline on the ground. Even our youngest campers knew that this wasn’t a sign for concern, but rather that it meant that we were having a breakout this morning!

Officer Caleb walked out and announced that today would be a massive murder mystery game, and everyone would be involved. Then over 30 bunk counselors came out in costumes, pretending to be famous detectives from novels, TV or movies. 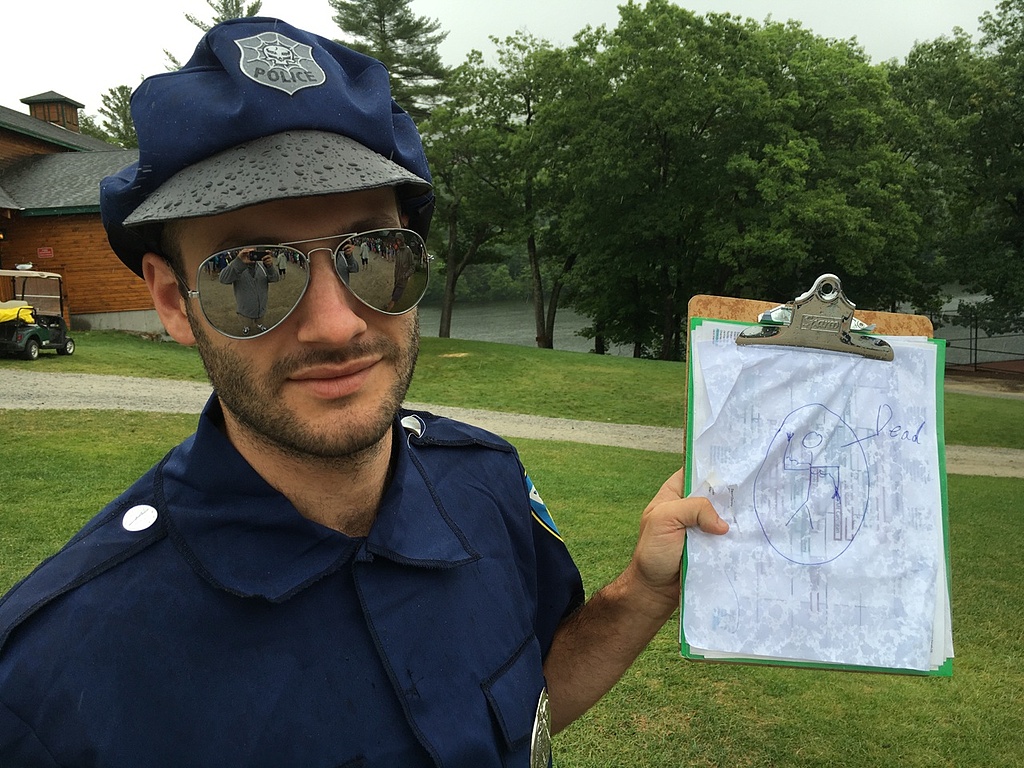 During the breakout, which consisted of about 10 minutes of funny skits, the skies opened up and yet again it began to pour. And yet nobody even budged. Mostly wearing their raincoats and rubber boots, our kids stood or sat in the rain and delighted as their counselors put on this ridiculous show for them. It was a classic camp moment of being a resilient person. 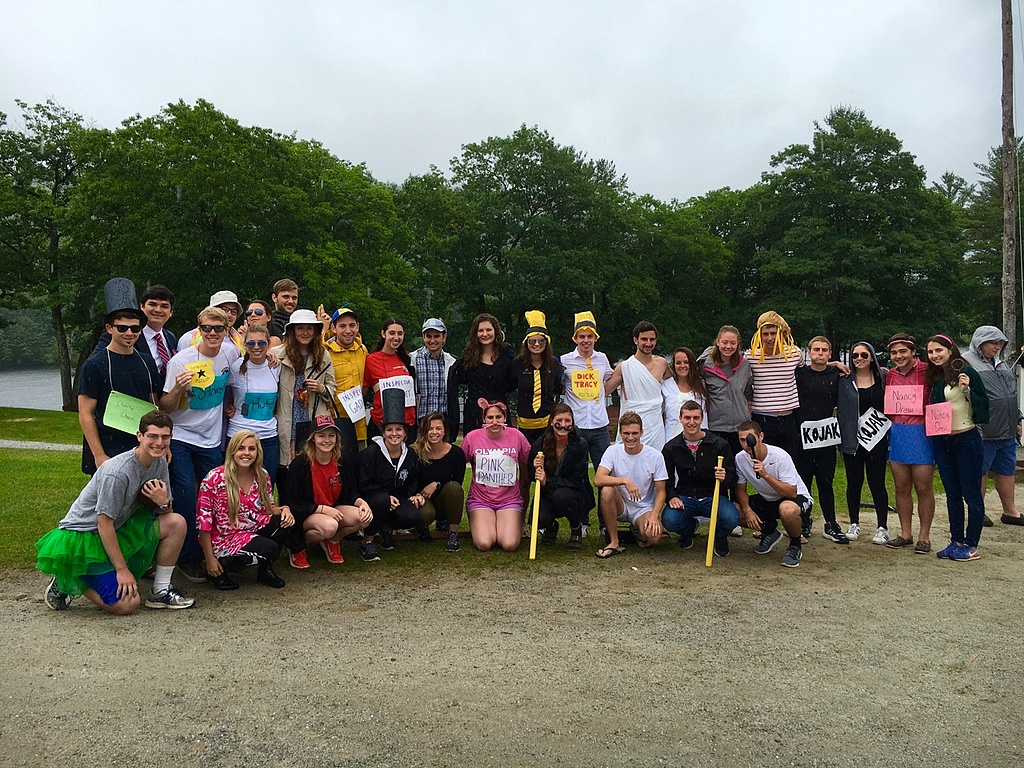 RELATED: A video recap of this amazing second week at our overnight camp in NH

For the rest of the day our campers were junior detectives, working in small groups to collect clues that might help them figure out who committed the morning’s “crime”. To earn clues they had to work together to solve puzzles or figure out how to solve tasks that required creative, outside the box thinking. 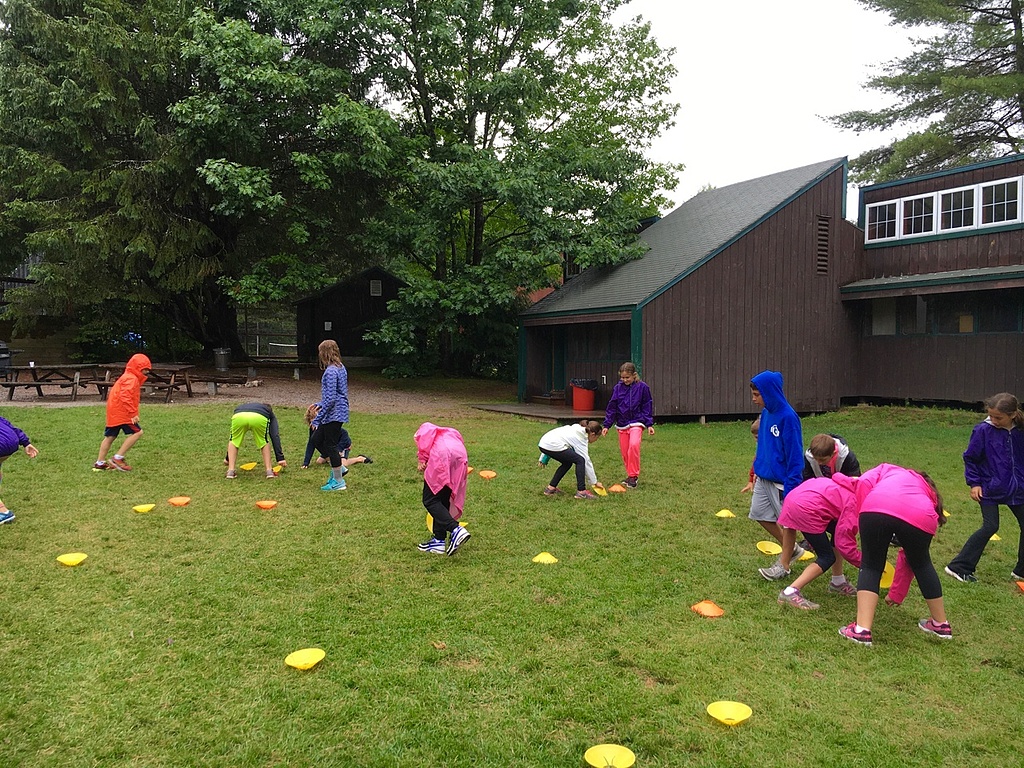 It was an entire day of fun with friends from both the boys’ and girls’ camps, all the while working on improving their 21st century skills like critical thinking and creative problem solving. In the game below each team had to come up with strategies for anticipating where the volleyball might land, since a tarp prevented them from seeing the other side of the court. 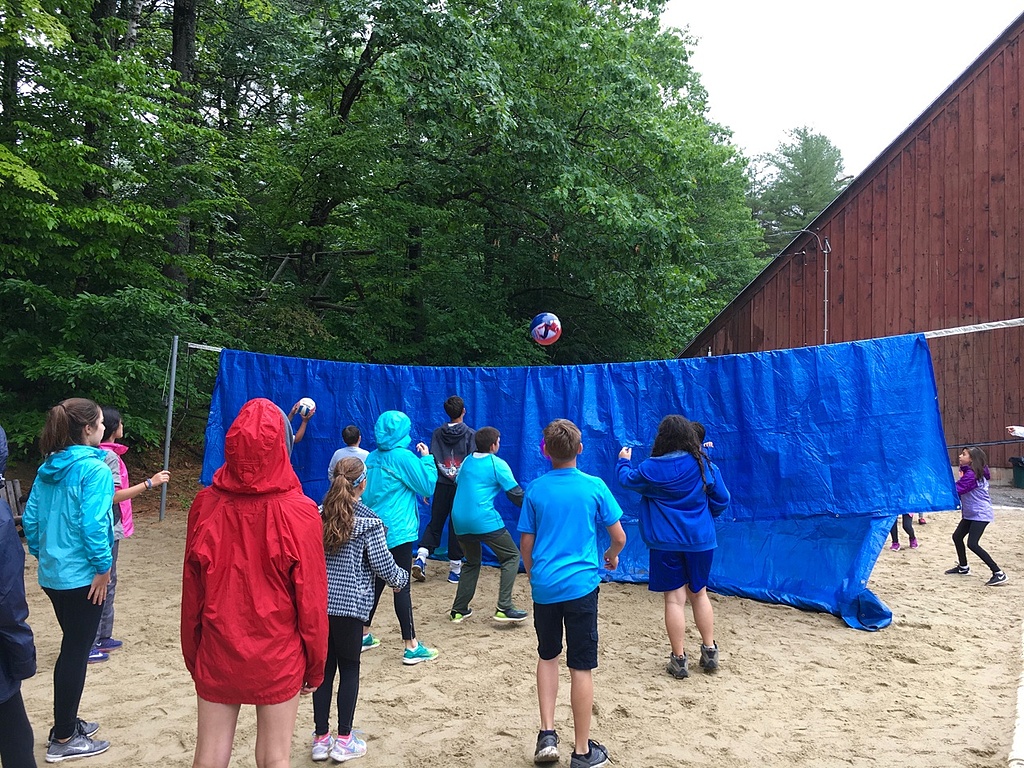 As you can see, it was an amazing day of fun and learning.

THIS is what our brother-sister overnight camp is all about. To our campers, days like today are about fun and friendship, and an excuse to play outside in the rain. But they are also incredibly important opportunities to learn how to deal with the inevitable obstacles that life presents, and realize that you can turn any rainy day into the best day of the entire summer!