Weekends Are For Being Together 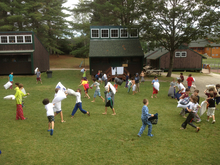 At Camps Kenwood & Evergreen weekends are for being together. No one travels outside of Camp, and we always have fun and exciting activities that bring our brother and sister camps together. Saturday morning was Lazy Morning at Camps Kenwood & Evergreen.  Everyone recharged their batteries by sleeping an hour later.  Immediately after Reveille I stood in the Kenwood Freshmen/Sophomore Compound and yelled “pillow fight!” at the top of my lungs.  A torrent of Kenwood Junior Campers and Counselors bounded out of their beds to have an enormous pillow fight in their bunk area.  Afterwards, many campers and counselors came up to breakfast in their pajamas for a lazy, relaxing breakfast.  We enjoyed homemade blueberry pancakes, hot chocolate, fresh fruit and berries, scrambled eggs with cheese, and a genuinely lovely morning atmosphere.

Following breakfast we changed our sheets and cleaned our bunks.  Units had their meetings to discuss the events of the previous week, and all of the fun and exciting things that we have coming up.  Campers also had a chance to voice to their Unit Leaders any thoughts that they had on how to tweak the way their unit was running.  We know that it is important to give our campers a chance to share their thoughts and ideas!  Then Kenwood had its weekly Watermelon Softball league games and Evergreen had its Candy Bar league games.

During Rest Period our Junior Counselors drew a white line down the middle of camp, and flags were placed in strategic locations throughout the campus.  The entire community was split into two teams so that we could play one of our favorite weekend games called “Ultimate Capture the Flag”.  Throughout the afternoon campers were running and dodging and chasing up and down the property.  Some were leaping over the white line in an attempt to score points for their team, while others were giving every ounce of energy that they had to tag someone before they were able to cross into safety.  It seemed like campers of every age were having a blast at this game.  I lost track of the total points scored, but I do recall that at the end both teams had well over 9,000 points, and every camper I saw looked like they were having a really good time!

We have played All-Camp Capture the Flag at Camps Kenwood & Evergreen for a very long time (certainly since I was a camper), and during that time the rules have changed very little. But about a week ago a Kenwood Junior approached me and Mia and pointed out that there was a strange facet of the game that should probably be changed, and that by doing so it would probably be more fun. We both thought about it for a moment and realized that he was absolutely right! So we told him that we would change it going forward, and I am happy to report that it really did improve the game. I love that our campers feel so comfortable to share their thoughts and ideas with us, especially when they have a critique of something we have done for years and years. I also love how committed they are to helping our community be at its best. In honor of this camper’s idea this new tweak to All-Camp Capture the Flag will going forward be known as “The Shagrin Rule”. 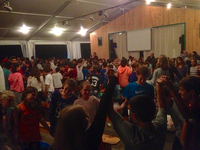 After a great afternoon our Junior Campers settled into the theater for a relaxing movie, while our Seniors had a co-ed campfire up on Senior Hill. At the campfire different groups of campers and staff took turns playing instruments, singing songs, and telling stories. One counselor who is a professional magician at home even did some slight-of-hand work for an enthralled the crowd. I love that this is how our teens spent their Saturday night this week, and how much they loved being together at such a fun event. As both events finished for our Junior and Senior campers our groups came together to join hands, sing Taps and end the another beautiful evening.

We slept late again today. Towards the end of morning assembly we were greeted with a surprise: pairs of counselors came out in costumes celebrating 12 different countries for a special weekend event called World Cup! The counselors were dressed in elaborate, silly costumes, and they put on hysterical skits that made the entire community laugh.  Our teams were from 6 continents, including Brazil, the United States, France, Ireland, South Africa, Niger, Israel, China, and, of course, Vatican City. One of our teams was Switzerland, and the head coach chose to wear a necklace of blue wire. I am offering an official Kenwood & Evergreen staff shirt for the first Camp Parent who can correctly guess why he included that in his costume! Please post your answer in the comment section of this blog. Everyone was placed on a team, and they spent the day playing a combination of traditional and silly sports, both on land and in the lake. There was softball, basketball, kickball, volleyball, speedball, canoe races and more!

The weather was hot and sunny, a little humid with and almost no clouds. Everyone was so excited to jump into the lake! We made sure that everyone got really wet, and there were several announcements throughout the day to make sure that everyone remembered to reapply their sun block.  Wherever I walked Kenwood & Evergreen campers were cheering for their teams and having a really fun time.  It was a day of terrific spirit and camaraderie. At dinner assembly Mia announced the names of the 3 teams with the most points, and their head coaches were awarded “metals” that she had made for them in arts and crafts. I played the national anthems of the 3 winning teams over the PA system, and I think many campers and staff were curious to actually hear what Turkey’s and Vatican City’s sounded like. The other team in the top 3 was the United States, and when I played the Star Spangled Banner the entire campus broke out into song. It was a really nice moment to end a great afternoon.

Looking to squeeze one more thing into the weekend, we also held the first Hollowpallooza meeting of the summer. If you are not familiar with this event, it is our annual all-Camp music festival that will take place on Saturday, August 3rd. Campers of all ages have started to form bands, and have been practicing in the music building since they arrived. Today’s meeting gave us a chance to see how many bands and acts have formed, and start planning for this favorite event. More news on this as we get closer to the big day!

After a great, hot weekend it was tonight it was nice to relax with a more mellow evening activity.  Our Kenwood Junior Campers had an evening down at the lake, and our younger Evergreen campers participated in a new event called “Shear Genius”. In each lodge our campers were given materials like ribbons, feathers, hairspray and mousse, and they spent the evening teasing their counselors’ hair in an attempt to make the most outlandish, ridiculous designs possible. You can imagine the hilarity that ensued!

While all of this was going on our Senior Campers had a co-ed square dance in the Gym. Kids and staff alike arrived decked out in cowboy hats, plaid shirts and even cowboy boots. As a group they danced all night, and everyone got involved!

Now our campers are asleep, getting some rest for tomorrow, and for the start of the third week of the summer.  This week our campers will be climbing mountains, canoeing on overnight trips, perfecting their swim strokes, playing in a myriad of sports tournaments, visiting local beaches and water slides, making movies, rehearsing for upcoming play productions, crafting sculptures, and, of course, just enjoying being together.