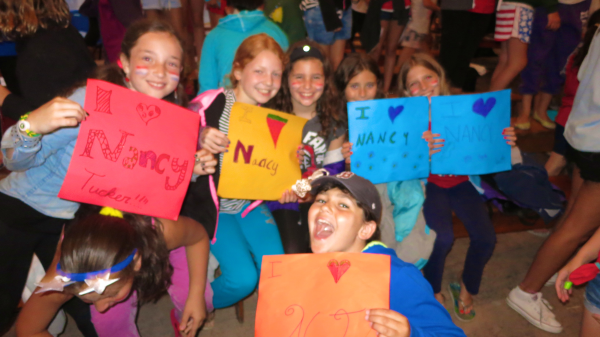 Camp was without power this morning, and yet we were all very happy campers. 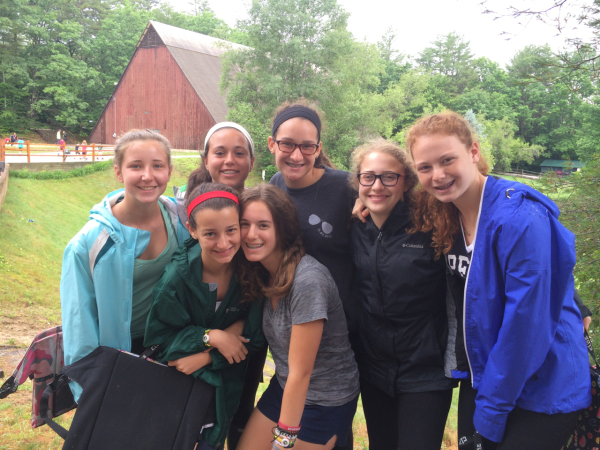 Camp received a whole lot of wind and rain last night, and when we woke up we discovered that the power had gone out. A ways down Eagle Pond Road a tree branch had fallen onto a power line, and while it was being fixed the power company shut us off. As soon as we learned of this Scott turned on our diesel-powered backup generator so that our fabulous kitchen team could make breakfast for the community. As Walshy and I walked through the bunks to wake everyone up (the PA system was also temporarily down) we found large numbers of kids happily sitting on their beds, quietly entertaining themselves. While this is not what we mean by saying that we offer “summers unplugged” it was great to see how easily our kids are able to disconnect themselves from the technological world. As I woke up the campers in Bunk 11 we had a hysterical debate about whether or not the tree that fell onto the power line made a sound, since no one was there to hear it.

Strangely enough, this was the second year in a row that our town lost power on the 4th of July, and many campers are now asking if it can be a tradition. Now THAT’S learning how to adapt! 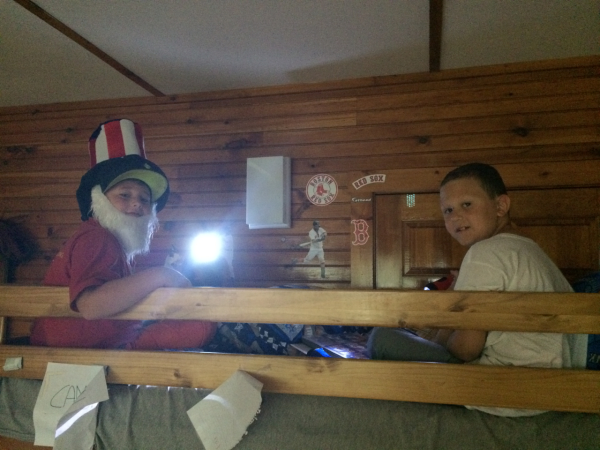 Because we could make our own power Chef Leonard and his team were already busy at work by the time Scott and I got to the dining hall. They made us a fabulous breakfast of eggs, chorizo, and hash browns, along with corn and flour tortillas to make breakfast burritos. It was delicious, and at the end of the meal the entire Camp sang a thank you to Leonard and the rest of the kitchen staff for being so fabulous. 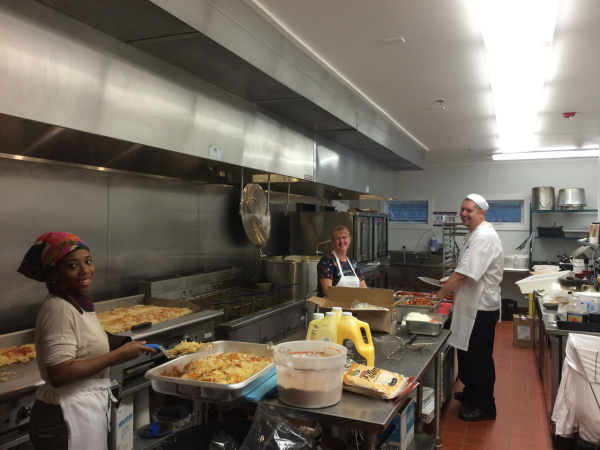 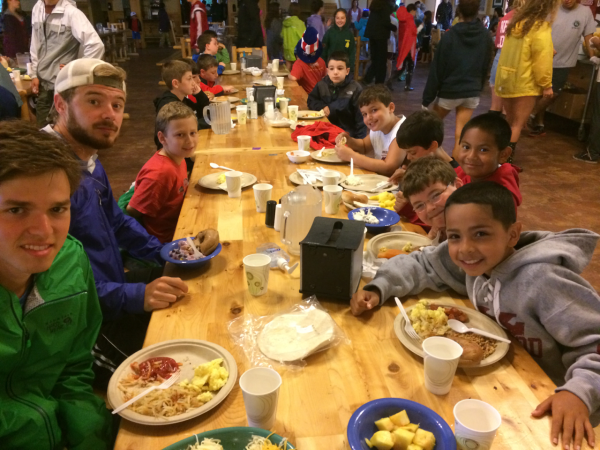 Halfway through breakfast all power was restored, and everyone cheered. Because it was still raining we had a lot of indoor activities this morning. Our girls’ dance team practiced in the dance studio, while our senior campers involved in the “Legally Blond” production began working on learning their lines. Campers were playing beach volleyball, tumbling at gymnastics, jamming in the music building, planking at CrossFit, playing soccer, and practicing basketball in the gym. 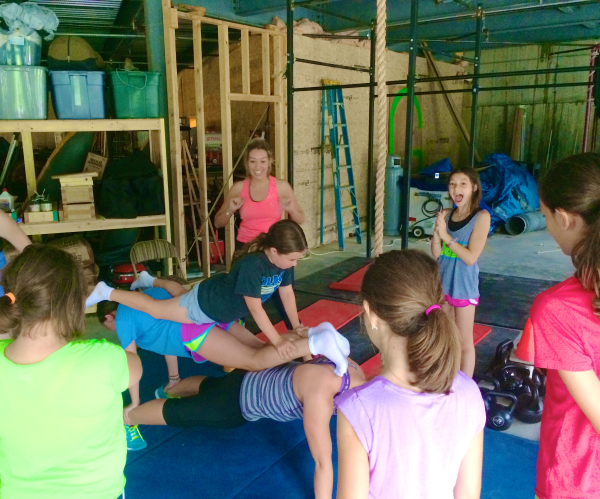 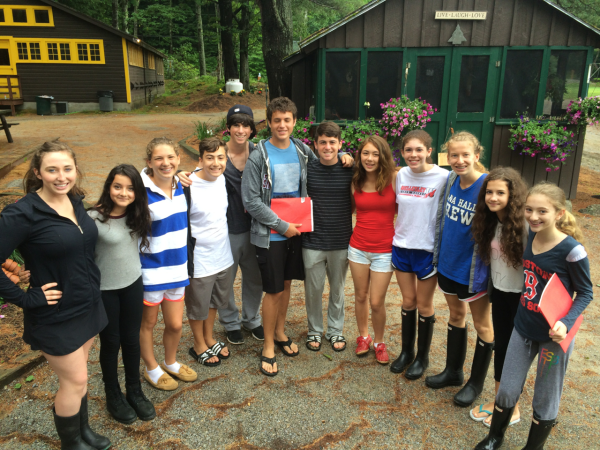 Many of our campers were more than happy to brave the rain and play outside (the weatherman was clear that we weren’t due for any thunder and lightning until the evening). This was especially true up on Senior Hill, where a group of boys had, as they told me, an EPIC game of Wiffle Ball.

I also had a chance to watch some of our Evergreen freshmen counselors run the most enthusiastic warm up for kickball that I’ve ever seen. As you can see, it was over-the-top and goofy. The counselors modeled for their kids that even in the rain this was going to be fun, and as you can see on their faces they had a blast!

All of our art studios were hopping, too. Campers were learning how to silk screen their t-shirts in Arts & Crafts, and were building benches and tables in the woodshop. Even when the weather isn’t great our kids are learning to make the best of what they have!

Though we usually have a big BBQ and fireworks extravaganza to celebrate the 4th, we postponed both until tomorrow night. It rained off and on all afternoon and evening, so we are saving those until July 5th. That said, our biggest and most beloved 4th of July tradition did happen tonight. Tonight we saw the return of the one and only NANCY TUCKER! 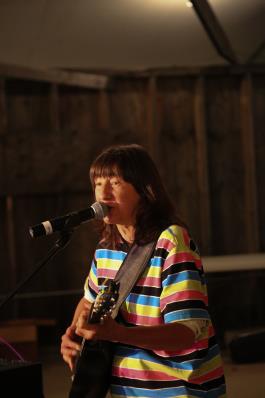 For those new to our community our good friend Nancy Tucker is a dynamic, engaging guitar player/singer who has been performing at Kenwood & Evergreen’s July 4th celebration since the mid-1980’s (I believe that this was year #29).  For almost 1 1/2 straight hours she sang funny songs, classic tunes and renditions of current pop hits.  I simply cannot adequately describe the excitement and enthusiasm that this event creates.  Campers of all ages arrived with handmade signs sporting slogans like “I Fancy Nancy” and “Nancy Is A Living Phenomenon”.

A group of Evergreen campers silk screened messages of love to Nancy on white t-shirts.  Our Hut 6 Senior Boys proudly joined her on stage to join her in singing a tune, and then our Juniper girls did the same towards the end of the concert.  She sang her classics, along with some new covers of today’s pop songs (including “Call Me Maybe”, “Pompeii” and “Hey, Soul Sister”. Our kids sang every word at the top of their lungs and danced from start to finish. She was funny and silly and just all around awesome. And our kids screamed and cheered like she was 50% One Direction and 50% Taylor Swift. I love how spirited our kids are, and how quickly they can come together as a community and celebrate such a special moment.

Today, even in the midst of grey, wet weather, our very happy campers were able to come together and have a blast. THAT is what Camp is all about!

Children thrive on their own when they are a part of a community that models resiliency and adaptability. Learn more about how we teach these 21st century life skills at our brother-sister summer camp in NH.