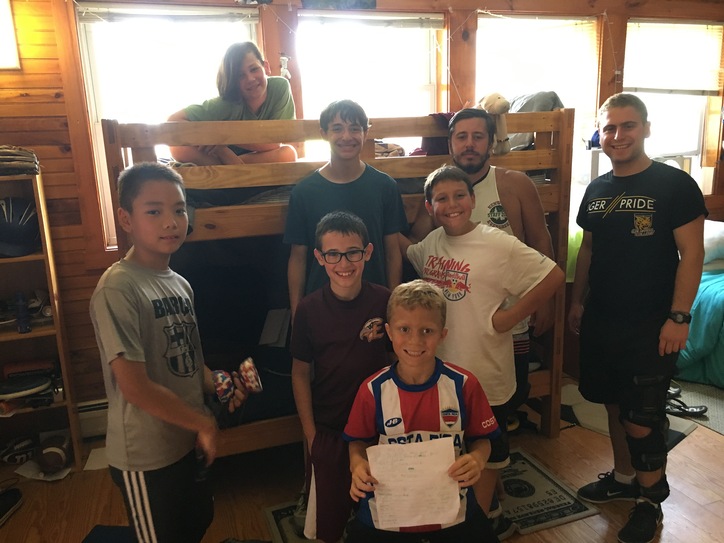 Tournaments, Trips and Tunes at Our Summer Camp Today

Today was a great day in our overnight camp for trips, outdoor adventures, tournaments and music. Just after reveille woke us up Kenwood’s 15 and Under Tri-State Softball team began its march through our campus. Stopping at each bunk area they did warm ups, sang their psych-up song, and put on a short demonstration for the younger campers. 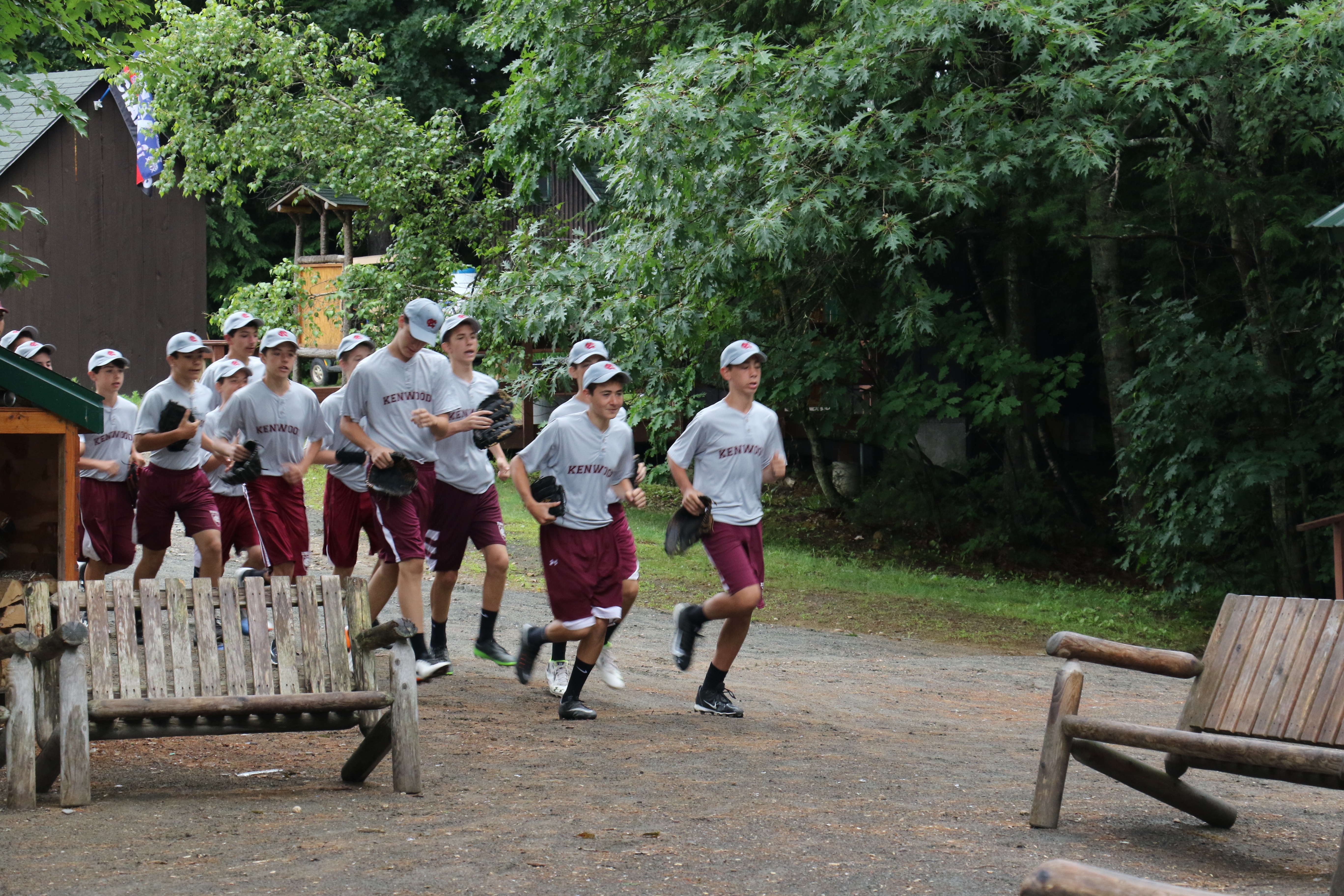 This tournament is a pretty big deal here. Tri-State, as it is routinely referred to, is the oldest summer camp sports tournament in New England. Banners going back to the early 1960’s hang throughout our dining hall celebrating our winning teams. I played in this tournament as a camper, as have generations of Kenwood young men before. Evergreen has its own Tri-State tournament as well and it took place yesterday. You can read more about it here. 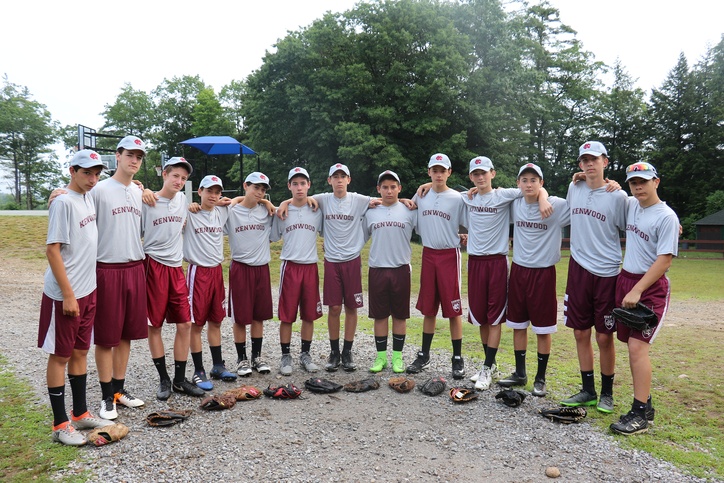 7 camps from far and wide traveled to play our oldest boys in this fantastic double-elimination fast-pitch softball event. Athletic Director Bob Mitchell and Assistant Head Coach Caleb Parker have been working with both teams since they arrived this summer. This morning they looked rested and ready. 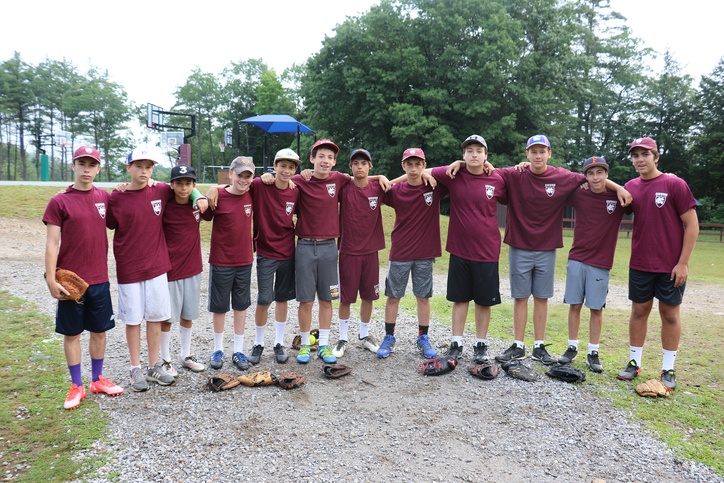 The grey shirted team won their first game 3-2, while the maroon uniformed team lost their first game 7-2. Both teams played really hard and worked well together. The maroon team lost their second game but the boys in grey won their second 6-2. They went on to win in the semi-finals 1-0, and then in finals went up a very, very good team…AND WON. Kenwood won the Tri-State 2017 Tournament with an undefeated record! Acka-Lacka Ching, Boys!

My favorite story from today was when one of the coaches from another team said to Scott “how do they play so well together? Have they been practicing every day”, to which he replied “they are a team in all ways”. I couldn’t agree more. 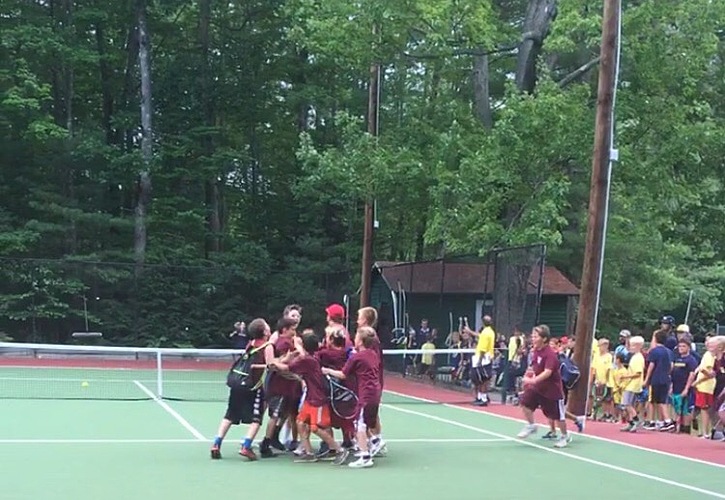 Softball was not the only tournament we participated in today. The Kenwood 10’s took part in a tennis tournament with camps from all over New Hampshire, and one of our kids went on to win the entire event! In the photo above you can see the moment when he won, and his group of friends rushed the court to celebrate with him. Below you can see the moment that Scott learned about this big moment in Kenwood sports history! 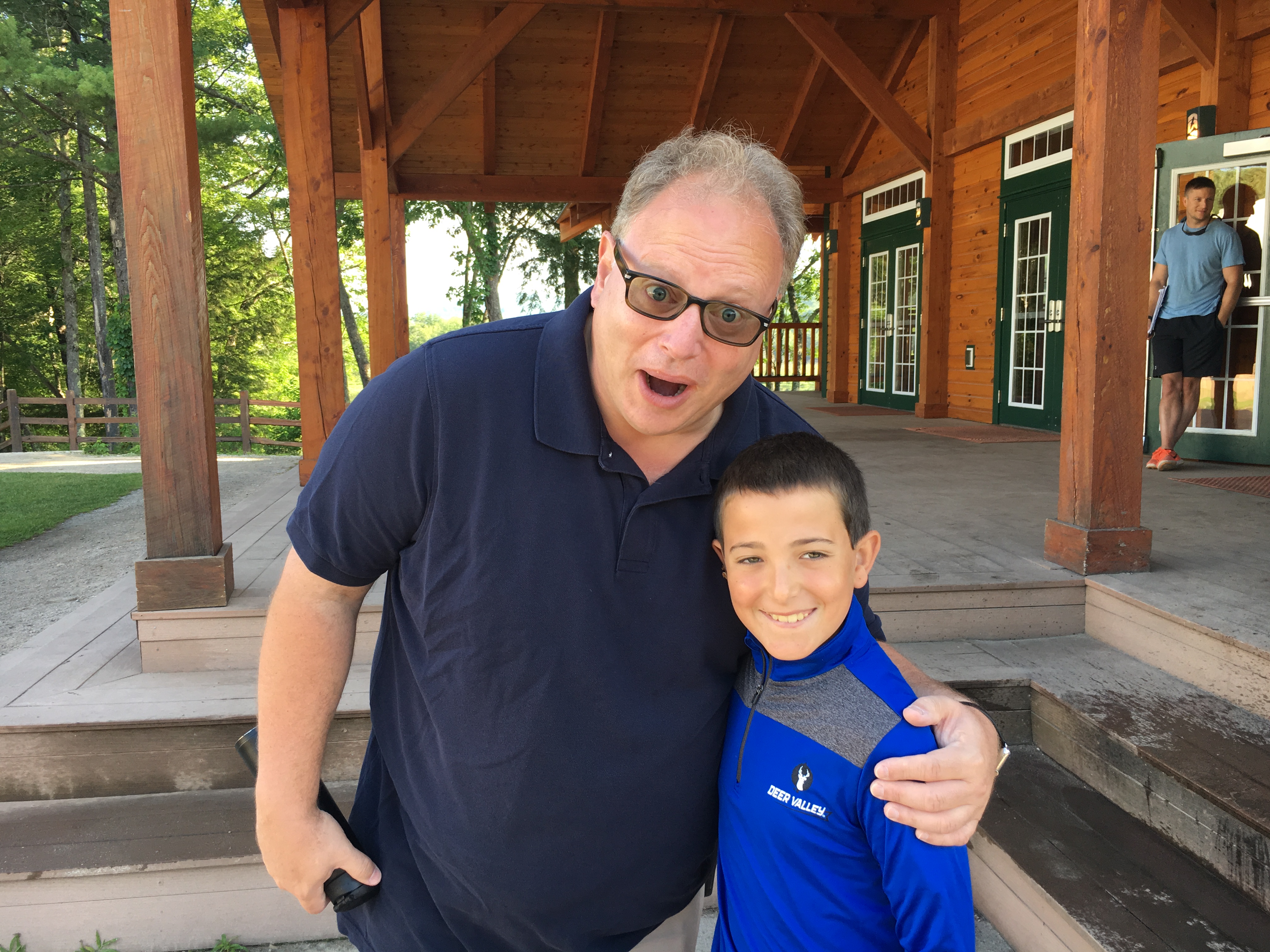 Back at regular activities it was busy day here as well. The music building was rockin’ to the sounds of Michael Jackson as a band of Kenwood Inters worked on their rendition of “Billie Jean”. The bass line was kickin’ and the band is really coming together nicely! 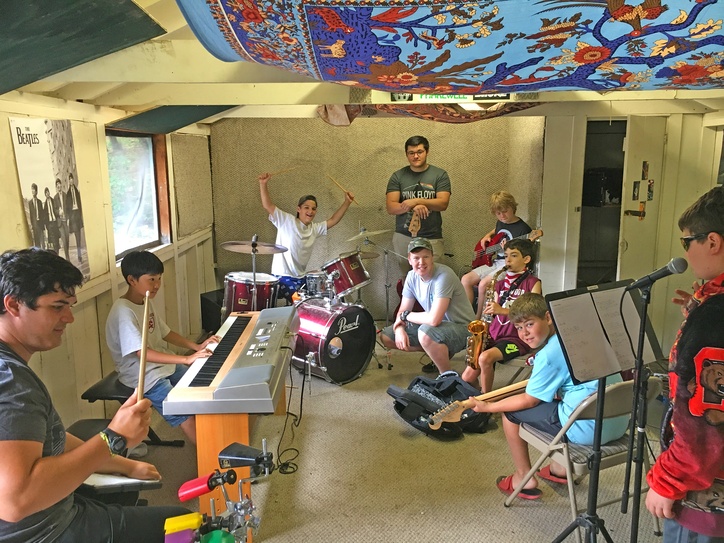 Just like these two girls and their trio. They are very excited for our annual music festival Hollowpalloza and are sounding really good (though I must confess I have no idea what song they were covering). 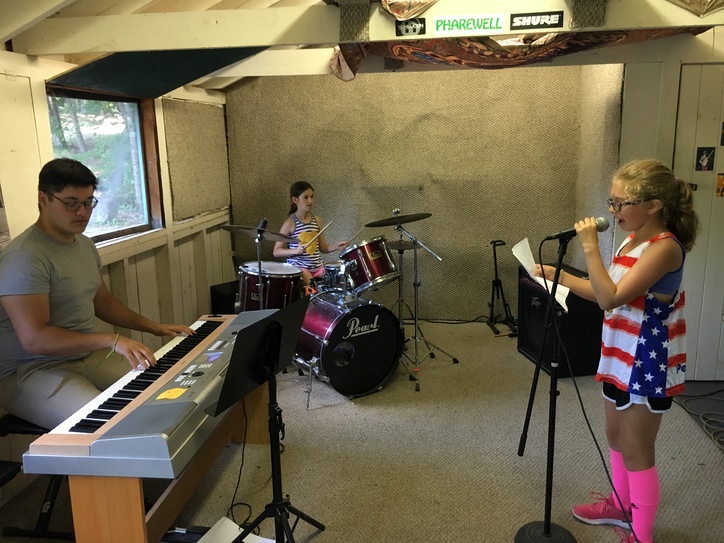 The weather was hot and humid today, which meant that campers were thrilled to be out on the lake. I spent some time in the back of one of our waterski boats hanging with these guys as they did some skiing and knee boarding. 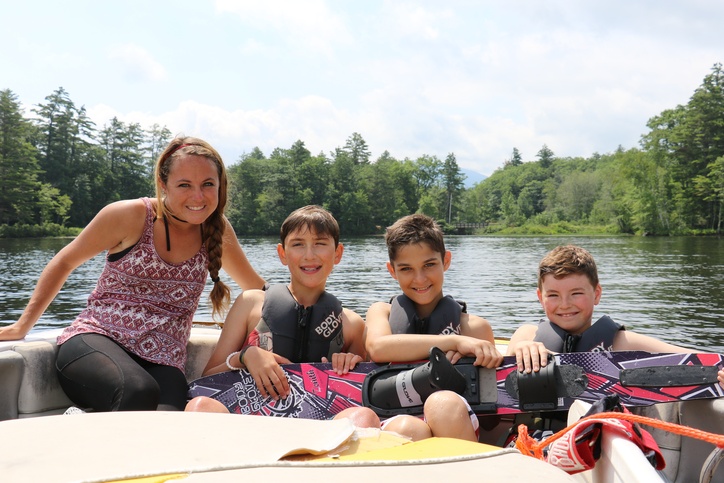 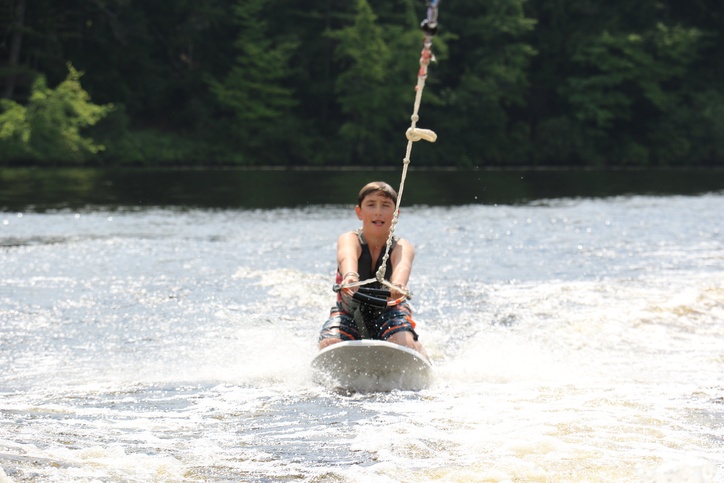 I also got to watch as our boys worked both on their diving and front crawl skills during swim lessons. 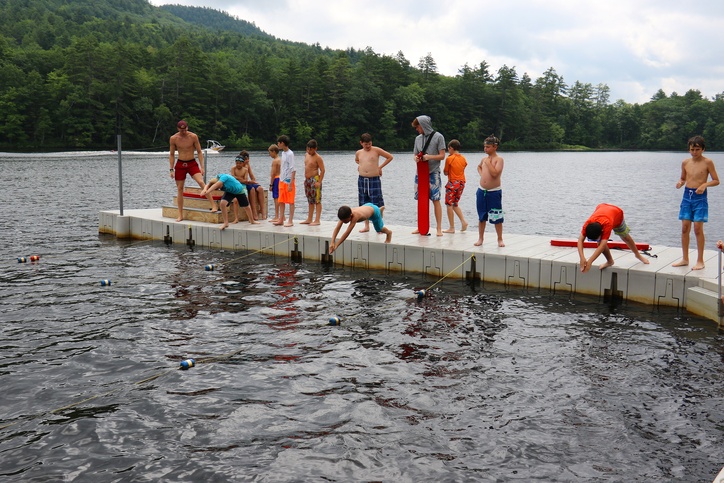 We had a lot going on at the ball fields today. Our boys and girls lacrosse coaches had them running shooting drills all morning long. They were also working on their scooping and cradling as well. It’s so fun to see how much they have improved in such a short period of time. 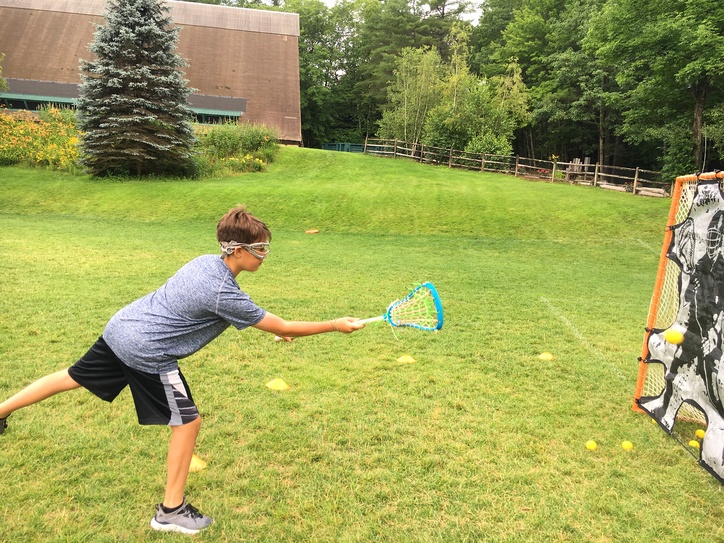 In the Hollow boys were playing Ultimate Frisbee and Flag Football all day and having a great time doing it. 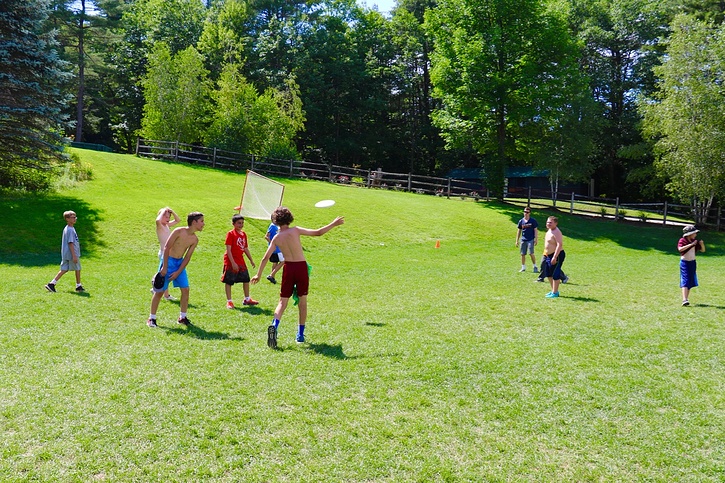 They were also up on the Senior Hill Basketball Court working with Coach Chris on their layups and outside shots. 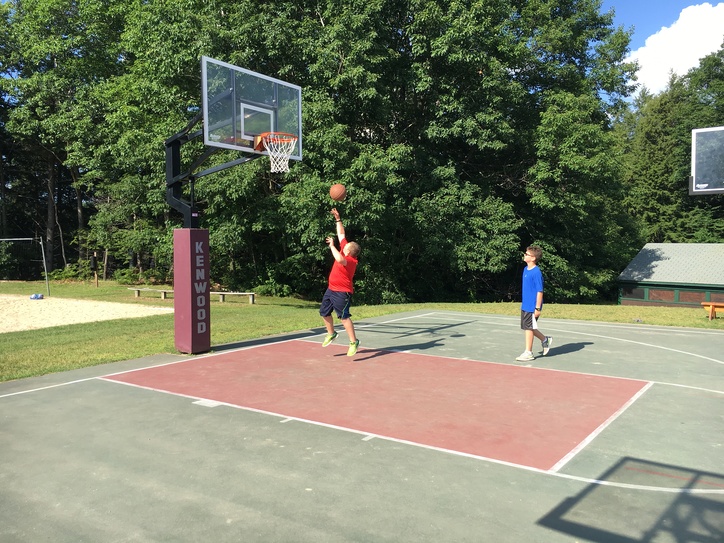 Their were kids practicing fielding pop ups and grounders with Coaches Adam and Scott on the Junior Ball Field all day long, too. 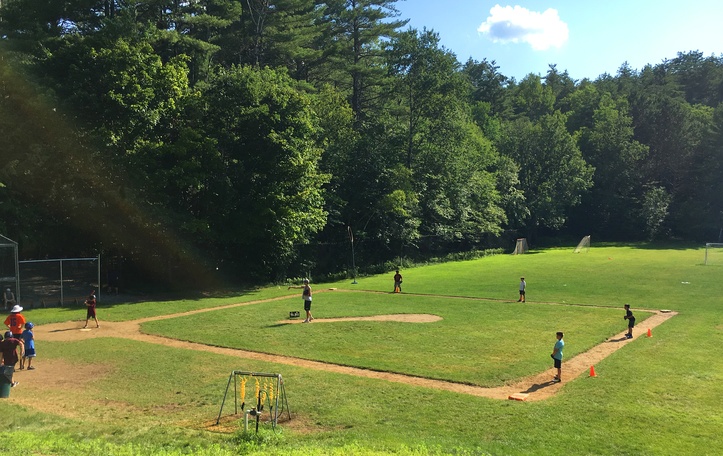 We also have our annual 3-D Archery tournament coming up later this week, so campers of all ages were at the range working on their form and accuracy. 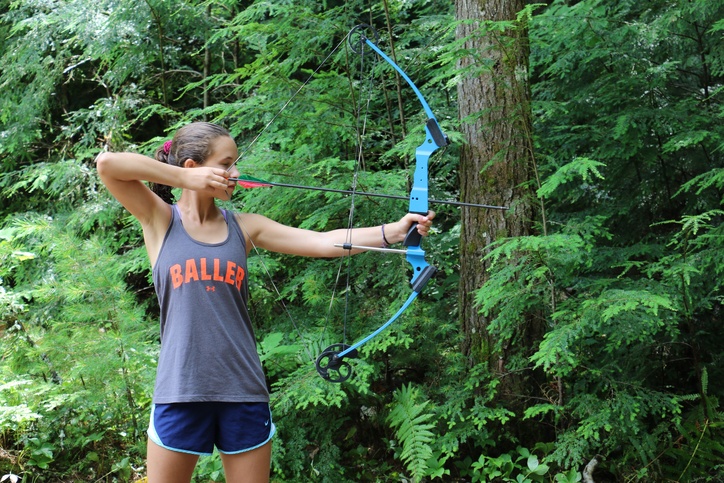 I also had the chance to spend some time with our Evergreen Seniors at the Ropes Course. Some were climbing up the pamper pole and leaping off (while safely harnessed, of course!) while others were getting a thrill riding our zip line into the woods. 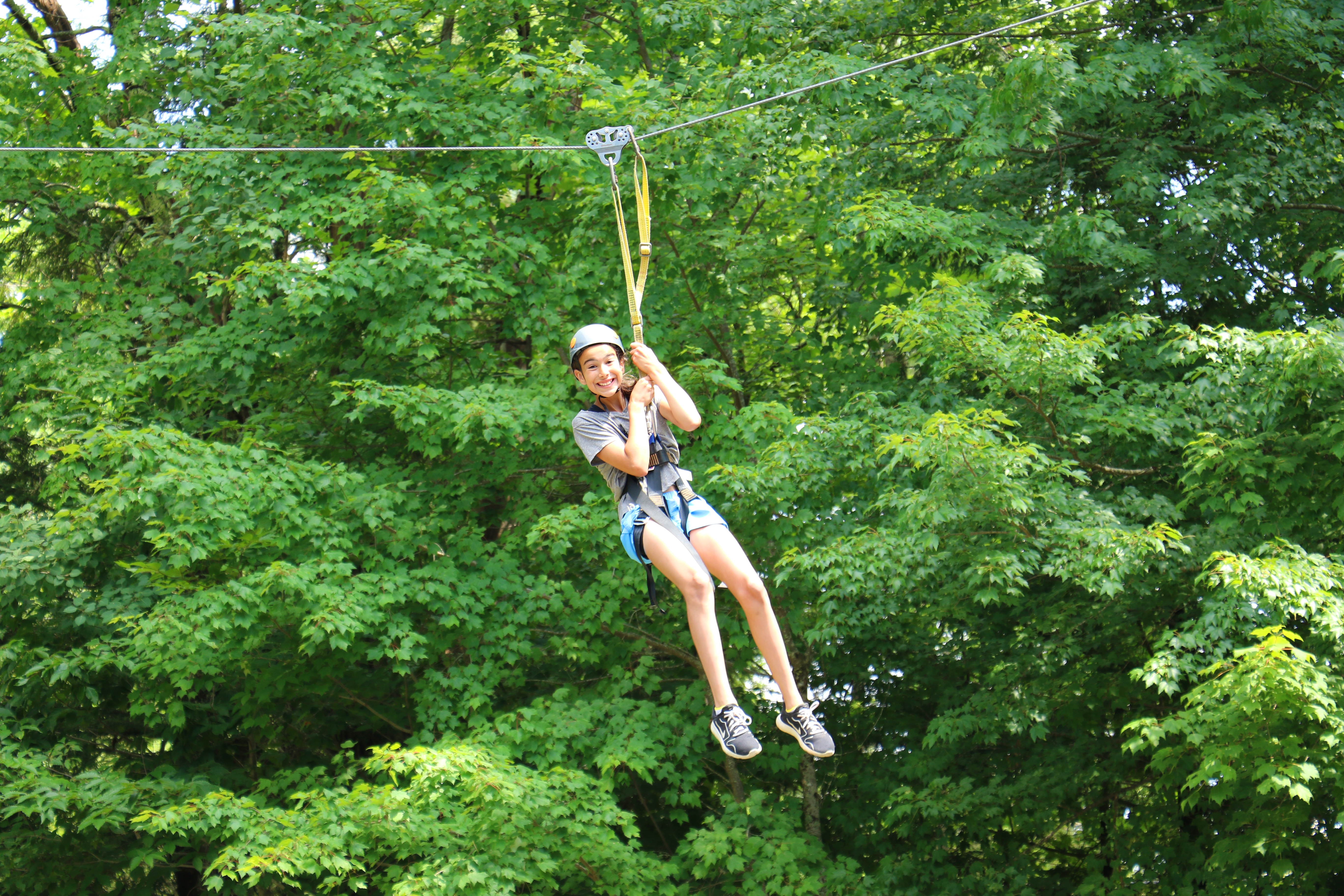 Evergreen’s Juniors got back from their mountain climb and overnight on Mt. Major. As they stepped off the bus the girls could not wait to tell me about how wet they got during the nighttime rain and how much they needed to shower…but also how much fun it was and glad they were to have gone. I love what troopers our girls are!! 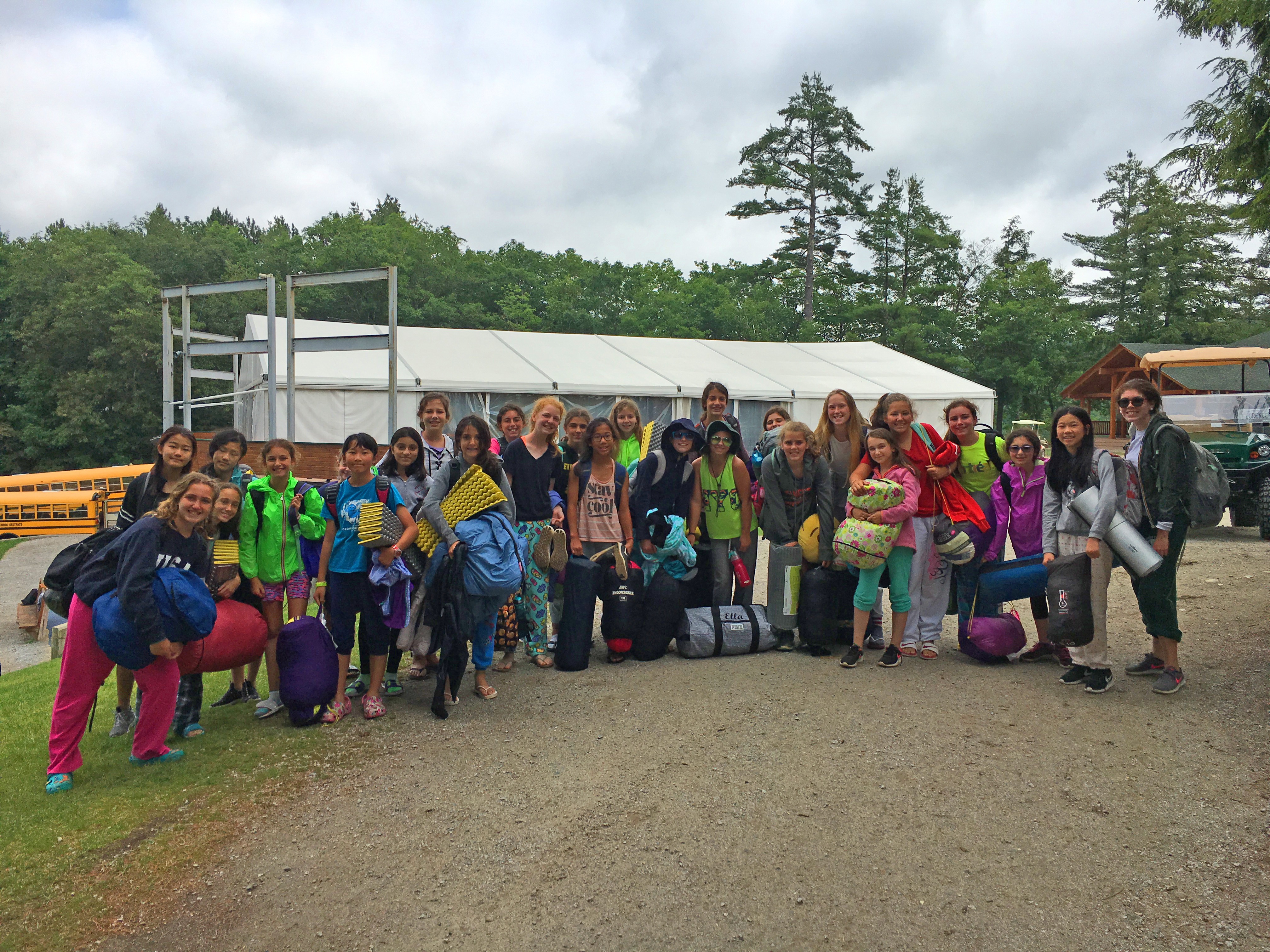 As the Mt. Major trip was leaving the Kenwood Freshmen were heading out on their canoe trip to Belle Island. This was always my favorite trip as both a camper and a counselor, and I am so excited to hear their stories when they return. Everyone was in such great spirits about this trip! 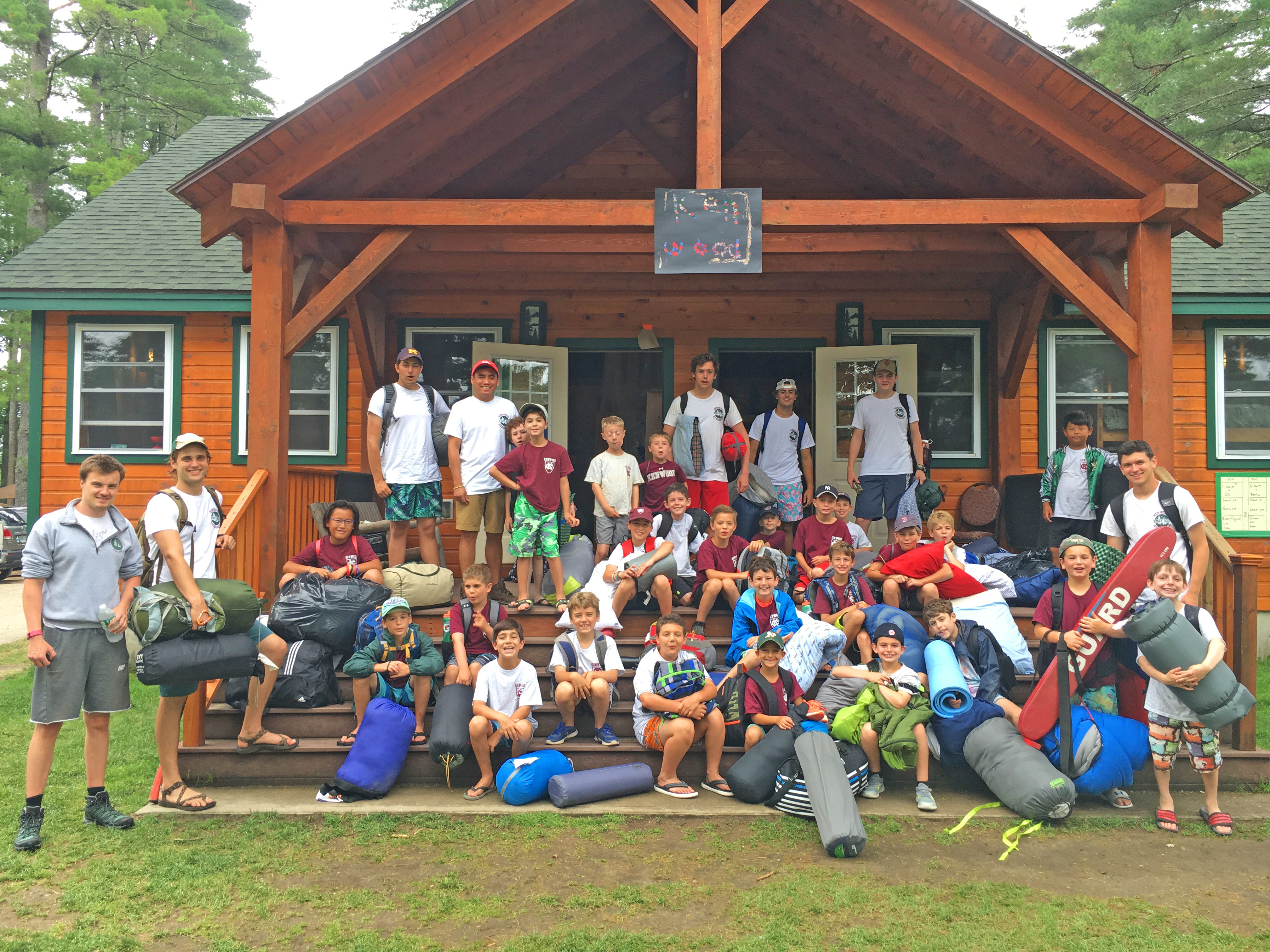 Cross Fit was outside today, mostly on the Junior Ball Field. Instructor Tammy had the kids running while carrying bags of sand and jumping over cones of different heights. When I arrived the girls were pushing themselves to complete one last round of repetitions, and they were pumped to show me how strong their arms were getting. 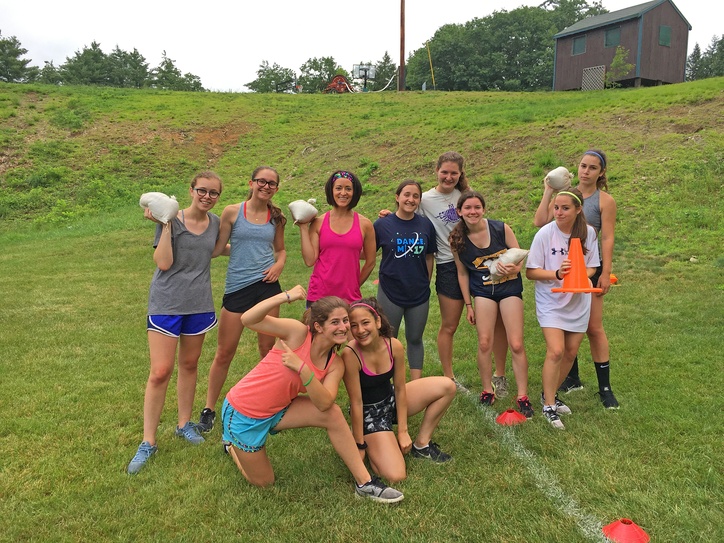 After lunch I hung out for a while with the Sophomore boys in Oak Lodge. Since the bunks have indoor basketball hoops counselors were playing Horse while other guys sat together enjoying their rubiks cubes and Simpsons comic books. 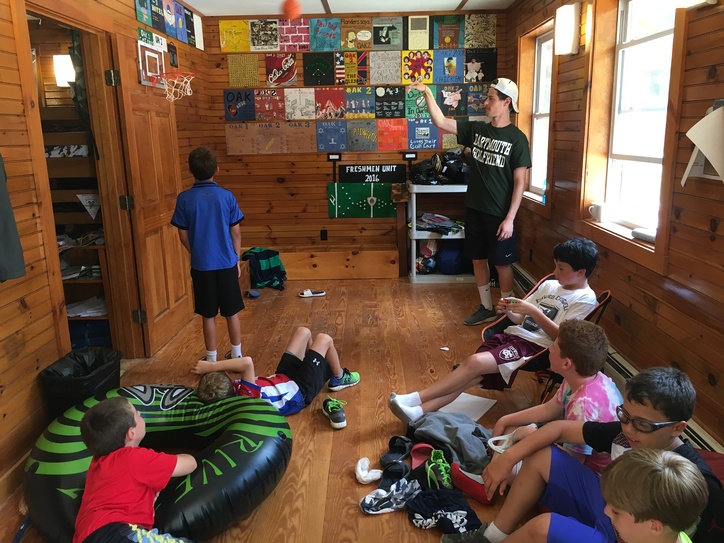 These guys were busy working on a music playlist to listen to when they had free time. They turned it into a great bunk collaboration opportunity with each person taking turns advocating for which songs would go on the list. It’s really eclectic but a really great mix of tunes.

Every day here this summer we are trying new things, making deeper friendships, learning new skills, and finding new ways to make living together more fun. We feel so fortunate to be able to have this experience and share it together!