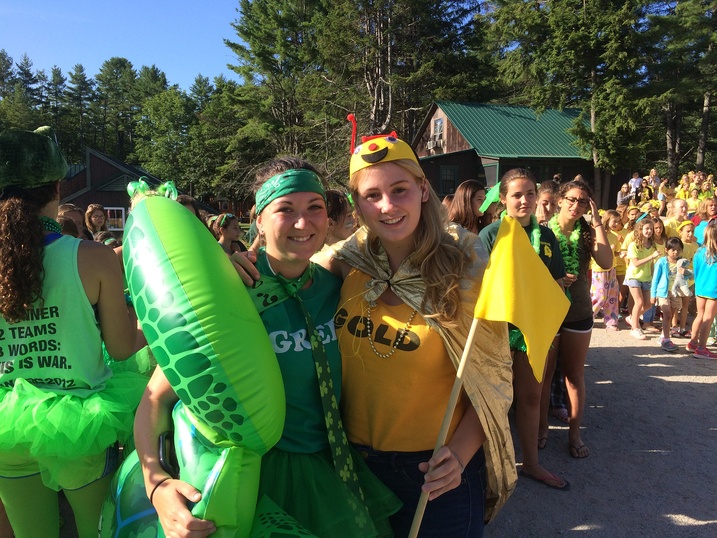 The start of Green and Gold, our girls’ camp’s Color War!

Yesterday evening our boys’ camp began their annual Color War tournament with a special event called a breakout. Just after the sun began to rise over our beautiful lake a plane flew over the Evergreen campus, and all sorts of craziness began. Take a look at this video I shot of the 2015 Green and Gold Color War breakout!

After breakfast Kenwood had its first event of the tournament: Find the Hatchet. Since our founding in 1930 one of the symbols of our boys’ camp has been a ceremonial wooden and steel hatchet. It’s wrapped in maroon and grey felt, the colors of the two teams in our boys’ color war. Head Counselor David Walsh explained the rules of the game to our campers, and for more than ten minutes they scoured our campus in New Hampshire. Eventually, a young man from Wellesley, MA found it at the base of a very special tree at the edge of one of our soccer fields. For his efforts he earned his team the first 5 points of this special event and a whole lot of hugs and high fives from his peers on both sides.

All morning and afternoon campers were participating in all of the team and individual sports we have worked on over the last 6 weeks of the summer. During this first day of Color War our boys played games of hockey, basketball, ultimate Frisbee, tennis, archery and soccer. Tonight, after dinner, the teams played even more team sports.

Once Kenwood finished their activities our girls’ headed out to begin their own Green and Gold events. Similar to Find the Hatchet, the girls have an event called Find the Colors. Each year my wife Deena gathers up strands of green and gold ribbon, binds them together, and then hides them somewhere on campus. This year the ribbon bouquet was located in one of the new flower boxes on the path up to the Senior basketball court. A sharp young lady from Sharon, MA found it in under a minute, and earned her team the firsts points of this year.

Throughout the day I traveled from game to game, enjoying how much effort each camper displayed on each field and court. It was powerful to see how much our boys and girls have grown as athletes and teammates this summer. I also loved that in the midst of this higher level of competition, I heard nary a word of negativity throughout the campus. Instead, I saw campers and coaches supporting one another, and always encouraging their teammates and friends to play at their best level.

We spend the entire 7 weeks at our summer camp season helping our campers to become more skilled at the sports and arts that they love. And yet we also work extremely hard to help them grow to become people of character and good values. Our Color War, with its elevated level of competition, puts those values to the test. Campers often wonder: in the heat of these games will I be able to balance my commitment to my team, and also my commitment to being a good friend and good person? Today, wherever I went, I saw our campers ably doing both. I saw players fall on the basketball court, and friends on the opposite team extend a hand to pick them up. I saw referees make tough calls and players immediately shake off any disagreements. After well-fought matches I saw players throw their arms around buddies on the other team and walk back to the bunks together.

As a camp director I’m so proud when I see moments like these, and they remind me of why so many campers look forward to this incredible special event each summer. Me, too.

Camps Kenwood and Evergreen is a 7-week brother-sister overnight camp in Wilmot, NH. We teach sports and art, along with skills for life.