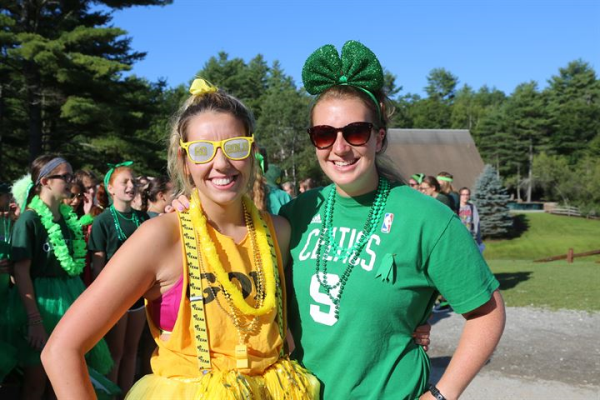 The End of Green and Gold, And Kenwood’s Rope Burning Special Event

The end of Green and Gold, and Kenwood’s Rope Burning special event

Tonight was the end of Green and Gold, the color war for our girls’ camp. After one final day of sports our two teams spent the evening practicing the four songs that they would sing at tonight’s final event called Song and Cheer. I was fortunate to have some time to watch both teams in their final practices. They both sounded confident and excited for tonight’s big event. Take a look!

Just before our girls gathered in the theater for Song and Cheer, our boys had their big Color War relay race. Every Kenwood camper was involved in at least one part of this event that began on the bridge leading to the Camp road, and ended up on Senior Hill. There was a canoe race, basketball shooting, archery targets to hit, and a massive bucket brigade. When it was over everyone in Kenwood came together to watch our oldest campers, called Hut 6, race to see which team could burn a rope suspended 12 feet in the air first. It was an amazing special event for everyone involved. If you’d like to see a video of tonight’s rope burning please click here.

When rope burning finished our boys headed back to their bunks to get an early night sleep. The Green and Gold teams marched into the theater for their Song and Cheer. The word from everyone who watched it was that both teams sang incredibly well. Alas, in our color war one team must win and one must lose, and tonight Gold came out victorious. We are proud of everyone involved in this year’s Green and Gold, especially our wonderful head coaches Anne Delia Sharkey and Caitlin Cochrane. Thank you to you both for running a fun, exciting, amazing special event for our girls!

We are now well into the final week of the summer of 2014. Evergreen’s Color War has ended, and tomorrow Kenwood’s will as well. Starting Wednesday we will begin our community’s many rituals for processing all of the friendships and memories we have made this summer, and for saying goodbye until next June. Already you can see the sadness in people’s faces as they realize that the end of this glorious summer is soon coming to a close.