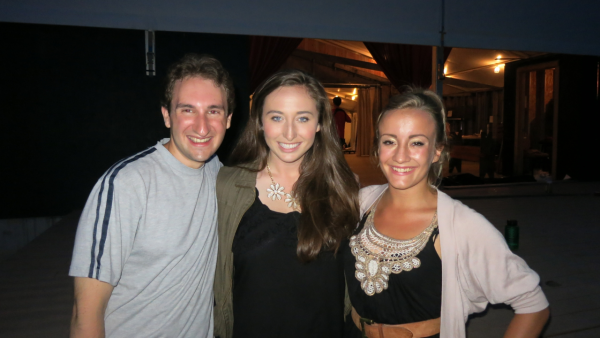 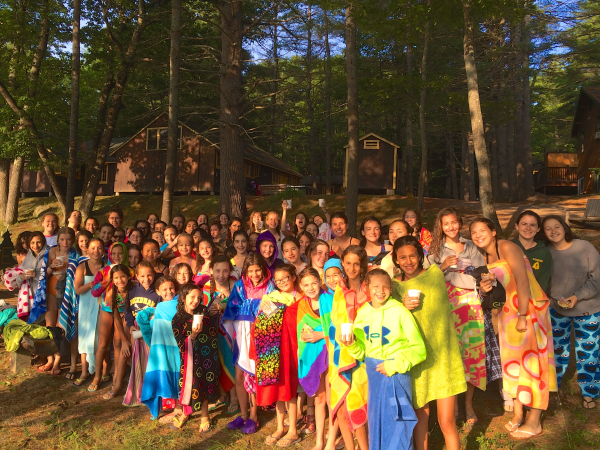 Today, our summer camp in NH said goodbye to a fabulous third week of the summer. Our very happy campers woke up to an absolutely beautiful New Hampshire morning. The weather was mild, and as the sun rose over the lake it quickly burned off a thin layer of fog. This was just around the time that 57 Evergreen campers and their counselors descended on the Evergreen waterfront for their second Polar Swim of the summer. With great glee they lined around the docks, did their jumping jacks, and with the support of Adventure Dave leapt into the brisk morning water.

Today just felt like a wonderfully mellow day. Our very happy campers seemed to enjoy their many activities, but I think that they enjoyed today’s rest period even more. The temperature was just right in the cabins, and as I walked from building to building I saw something that surprised me. In both Kenwood and Evergreen there were campers of various ages in all of the bunks. Seniors were playing magic cards with their Inter friends, and Sophomores were playing ping pong with the Juniors. There was a dance party in Cedar lodge with Freshmen, Sophomores, and Seniors, and in front of Hemlock about 50 girls and counselors were lying on towels listening to music. It was wonderfully social, and the mixture of friends of different ages made me smile. 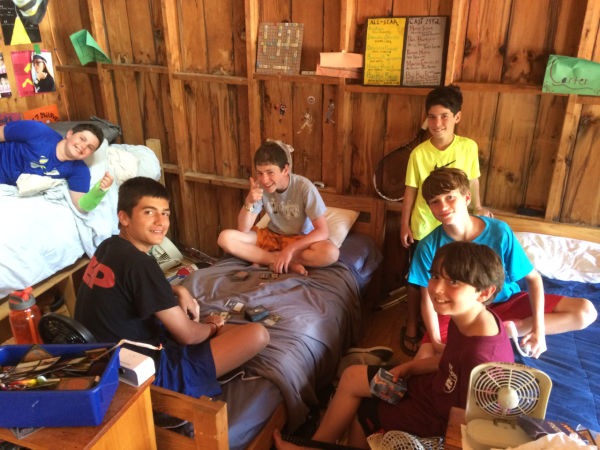 I saw a lot of great activities today. Mia ran a fantastic softball pitching clinic for our future Tri-State Softball players. Athletic Director Bob Mitchell was up on Senior Hill, helping the boys get in one of their final practices before the Tri-State Softball Tournament on Tuesday. More kids were designing comic books in photo, and in cooking both boys and girls were learning how to make different styles of guacamole. In the woodshop Vinny was teaching kids how to make rustic signs using found sticks and twigs, and in arts and crafts Leah was helping people tie dye just about anything they could carry. 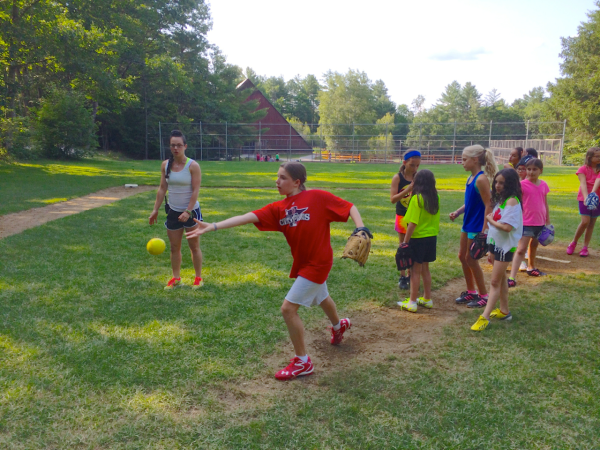 We had a bunch of trips out today. Adventure Dave and Deena took the Evergreen 1st Year Seniors on an ocean paddle boarding trip. The Evergreen 12’s soccer team came in 2nd place in an 8-camp tournament. Our Kenwood 12’s touch football team also came home with a well-earned 2nd place finish. 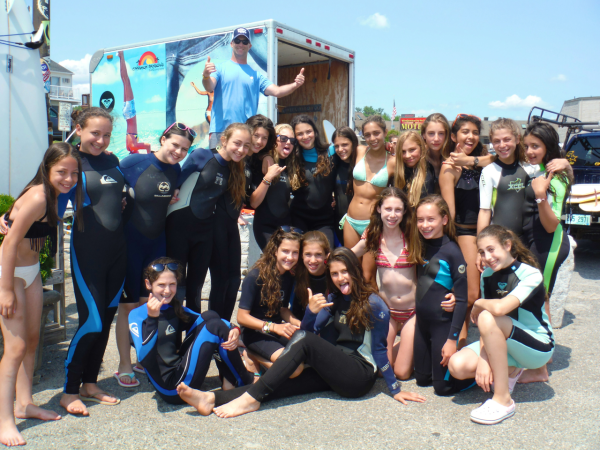 Kenwood’s Hut 6 spent much of their day at their lifeguard training course. Today they were in a pool, practicing their open water rescue and backboard skills. 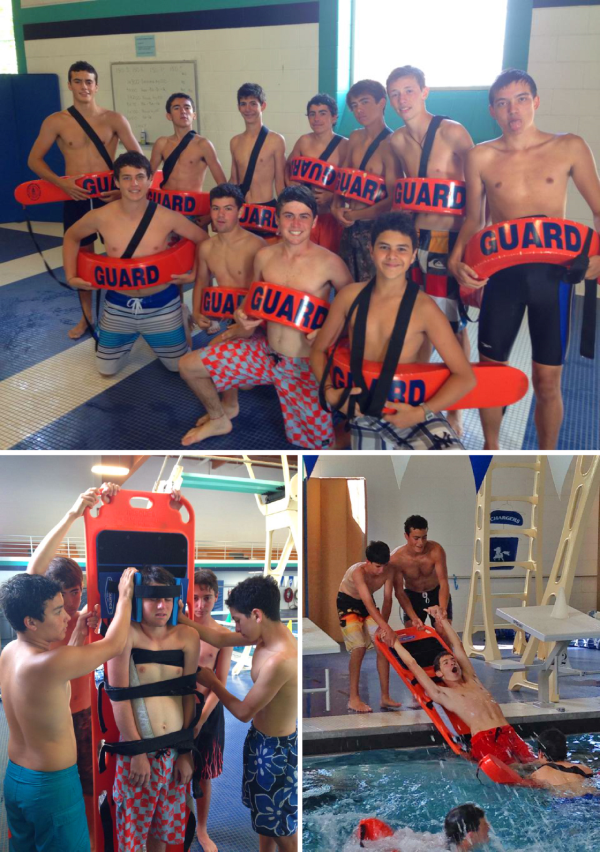 Tonight was also the first theatrical production of this summer camp season. For the past three weeks many of our 8, 9 and 10-year old campers have been collaborating on a musical production called Wiz Kids. It’s an adaptation of scenes and music from The Wizard of Oz, The Wiz and Wicked. They worked extremely hard on their play, and not just on learning their lines. Campers were involved in every aspect of this production, from the creation of the costumes and scenery to the lighting design and use of the movable spotlight. 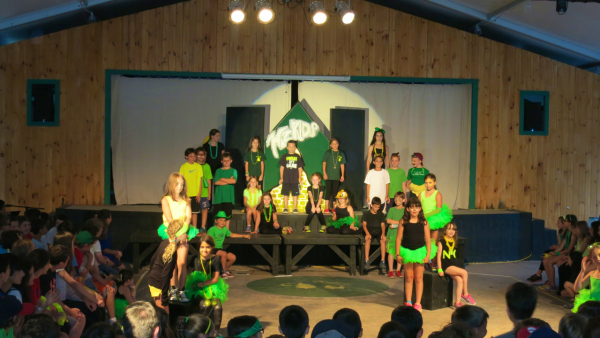 This was truly one of the best Junior Camp productions that our community has seen in the last couple of decades. The kids sang their hearts out and knew all of their choreography. The audience of almost 500 people sat in respectful silence, except when they cheered so loudly that the theater shook.

A special note of thanks to our Theater Director Torrance Shepherd, Piano Accompanist Emily Robbins, and Technical Director Rob Negus. You each made this project fun, creative and exciting for the campers. At the cast party afterwards our young actors and stage hands were beaming with pride for having put on such a fantastic production. If you’d like to see some highlights from tonight’s production we have put them up on our youtube channel.

And then, just as the play ended, Scott told everyone that we were going to rise to say goodnight by singing “Taps”. Just as the house lights in the theater went down a movie projected onto a screen, and all sorts of craziness began. Smoke billowed from everywhere as counselors walked out from behind the stage in elaborate, handmade costumes…It was the start of “Big Weekend 2014”!

So what exactly IS Big Weekend? In some ways it’s like a miniature version of Color War, with some very important differences. During Big Weekend we divide the camp community up into 6 teams, all based on a theme. And over the course of 2 days campers participate in some traditional, and some creative, sports activities. So starting tomorrow there will be boys and girls playing softball, and then later in the day they will be laughing it up during an event called “Lineup Ball”. The goal of Big Weekend is to bring our two camps together for some fun, low-key, age-appropriate play, and to help our boys and girls make quality friendships with the kids in the other camp. There’s a great deal of singing, cheering, and team spirit. And when they are playing our more creative games, it’s a chance for them to work yet again on the 21st Century Skills that we have been focusing on all summer long (skills like collaboration, effective communication, leadership, and creative problem solving).

In case you couldn’t make it out in the video, this year’s theme is Mythological Characters. The teams are Minotaurs, Pegasus, Mermaids, Gryphons, Dragons, Centaurs, and Phoenixes. Tomorrow we start the 4th week of the summer, and it’s going to be amazing!

We have a ton of fun throughout our 7-week season at our summer camp in NH. We invite you to learn more about the incredible experiences our campers have here each and every day.