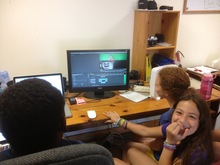 Sunny Day At Camp In NH

It was another beautiful, sunny day at camp in NH today. Everyone in Kenwood was on campus, as was most of Evergreen. I spent my morning walking around from activity to activity, happy to watch all of the great fun that our kids were having. My first stop was in the film making studio, where a group of our girls were busy putting the finishing edits on their submission for the 6th annual Film Festival, which will be this coming Monday evening. The videos that I saw involved sophisticated use of the green screen, complicated edits, and even a separate sountrack!

My next stop was at the Ropes Course, where a group of Junior Girls asked me if I had been up on the new zip line. I told them that I hadn’t, and they asked why not. It was then that I had to admit that I have a pretty strong fear of falling. This did not sit well with any of them, and being Evergreen girls they decided that it was their job to counsel me and support me until I acquiesced. Enjoy this video of a very nervous grown man confronting his fears…and really loving it. Many thanks to my friends in the Evergreen Junior unit for their friendship and support!

With my legs still shaking I headed over to the Kenwood Waterfront with my trusty Gopro camera in hand. Last night I had figured out a way to fasten it to the handbar of the waterski rope, and today was able to capture some pretty fun footage of two of our Senior boys behind the boat.

After lunch I stopped over at the Evergreen Waterfront and asked a couple of girls if they wanted to have their wakeboarding filmed. They got very excited, and you’ll see why when you watch the video. The camera was able to record all three of them this afternoon being about as happy as can be!

Yesterday I announced that our Evergreen Dance team had won their tournament against all of the other girls’ camps in the area, and that there was a rumor that one of the counselors had filmed it. Below is a compilation of what she was able to shoot, and I believe that it includes all of the performances that our girls gave. I highly recommend watching them. You can see how well they did, and how precise their choreography was. Bravo, girls!

Tonight after dinner we had Brother-Sister visiting, followed by Friday night services. My sermon this week was about the importance of adaptability, resilience, and overcoming the obstacles that life puts in front of you. Afterwards, our Bunk 1 counselor got up in front of the Camp and did a ten minute standup comedy routine that he has been working on. He’s genuinely hysterical, and the kids were rolling in the aisles as he delivered each (clean) joke. There are just so many talented people here!

The last event of day, and of this 5th week of the summer, was a traditional we call the Drive-In Movie. In the early afternoon David and I erected a massive outdoor movie screen in the Hollow, and hooked up our most powerful speakers on either side of it. After Services our campers and counselors arrived with sleeping bags and portable chairs to enjoy a movie outside on a picturesque NH evening. It’s a throwback retro sort of event, and one that is loved by our entire community. How great is it to be able to sit outside with your friends and watch a movie?