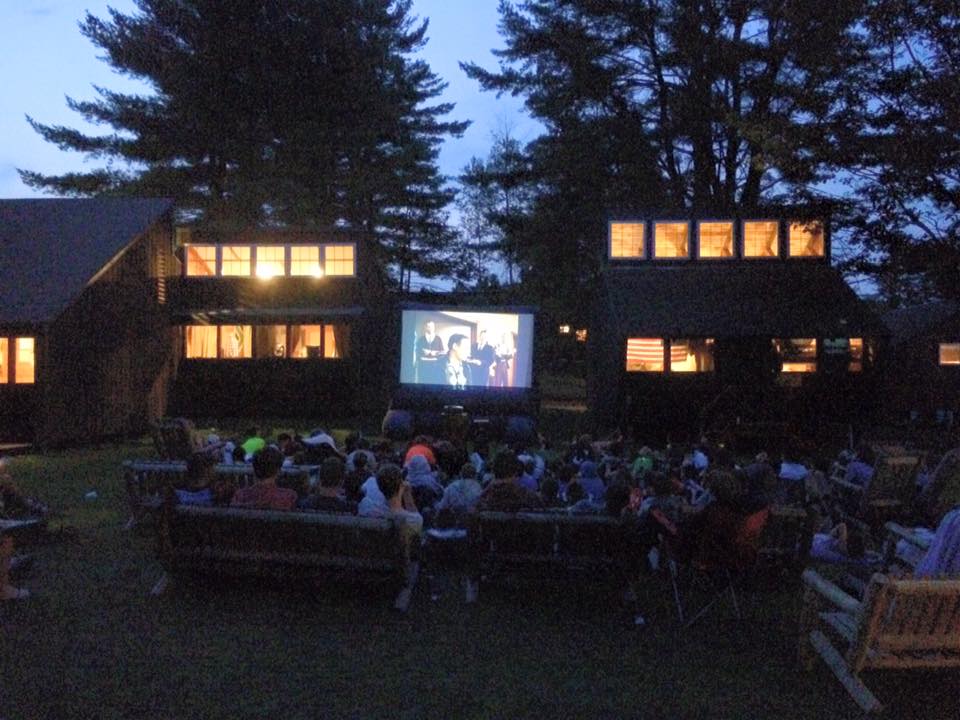 Weekends are really special here. As a brother-sister summer camp in NH, our boys and girls spend their weekdays doing their own thing. Campers in each camp participate in the same activities – team and individual sports, visual and performing arts, and all sorts of waterfront and adventure activities – just not together. The weekends are when we bring our two camps together for some of our amazing special events. It’s part of how we define ourselves as brother-sister camps (and not a coed one).

On Sunday our special event coordinators Jacki and Bob Mitchell put together an all-day extravaganza called “Oddlympics”. Many of our campers suspected that there would be a breakout today, so rather than having it during morning assembly (when they expected it), the Mitchells tried something new. They had the coaches of the 16 Oddlympic teams march around the entire campus waking everyone up. The kids ran out of the bunks excited to see what was going on and who was involved. The counselors had so much spirit, and were having so much fun, and it set the tone for the entire day. 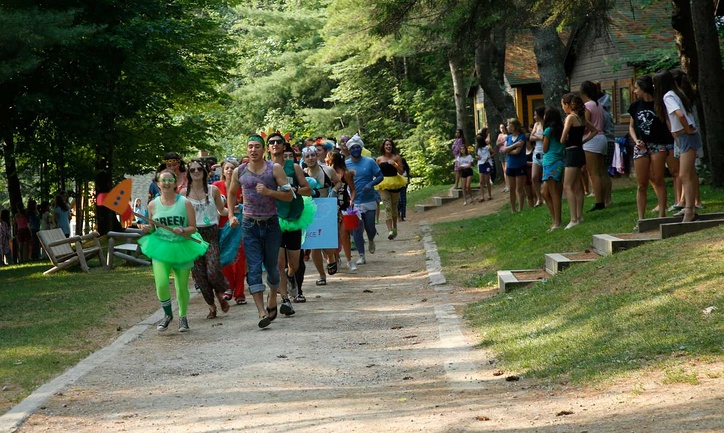 At breakfast assembly Jacki read off the names of each team in our creative special event. There was Candy Land, Outer Space, Pajama Place, Lion Land, Ocean City Clown Town, Hippy Hill, Farmville, Tall Town and more. Each team of counselors put on a short skit to explain where they were from, and the kids laughed and cheered at the elaborate costumes and pageantry. It was a great morning for Camp spirit! After quick team meetings (and the weekly all campus changing of bed sheets), the entire community rolled out for the first round of games. 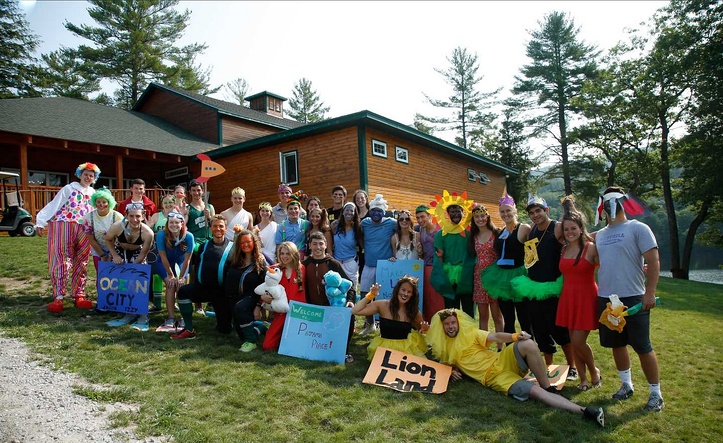 Our summer camp in NH tries to infuse the teaching of 21st century skills into every one of our activities. Nowhere is this more apparent than during Jacki and Bob’s creative special events. During Oddlympics each coed activity was designed to help our campers work on some, or all, of the following crucial life skills: problem solving and effective communication, teamwork and collaboration, adaptability and resilience, creativity and critical thinking. Here are a couple of examples:

Balloon Advance: In the Gym, two teams lined up at the opposite ends of the gym behind the baseline. Each team got 6 balloons of the same color (and a different color for each team). The object was to get the whole team across to the opposite end line with all six balloons. Players could only move forward, and only if their balloon was in mid-air. Opposing players could hit the other team’s balloons.

Evolution: This is actually a rock-paper-scissors themed game, where each team tries to win as many rounds as quickly as possible. Everyone starts out in the game as an egg (hence the image below of the kids with their hands in circles over their heads). They had to waddle to other eggs on the other teams and have a rock-paper-scissor match. The winner gets to “evolve” into a chicken. The chickens then battle it out with other chickens. The winning chicken evolves into an ape, while the losing chicken devolves back into an egg. A winning ape evolves into a man, and then evolves out of the game and wins a point for their team. 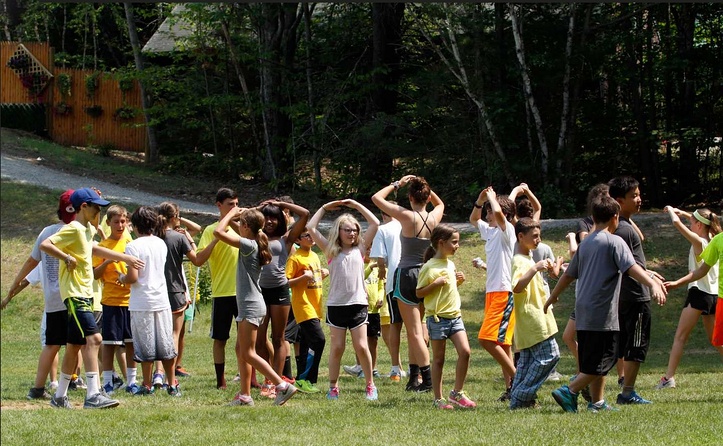 Hidden Newcomb: Similar to actual Newcomb, this has one MAJOR twist. A tarp was placed over the net, so neither team could see how and when the ball would be traveling over. Teams had to work on strategies to track movement under the net, and predict when the ball might travel over it. 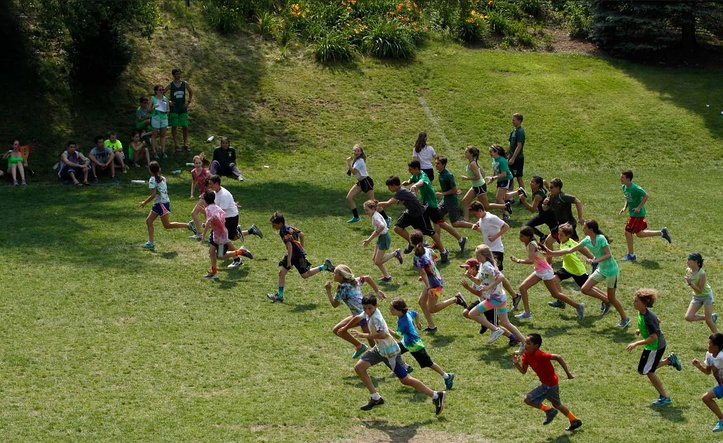 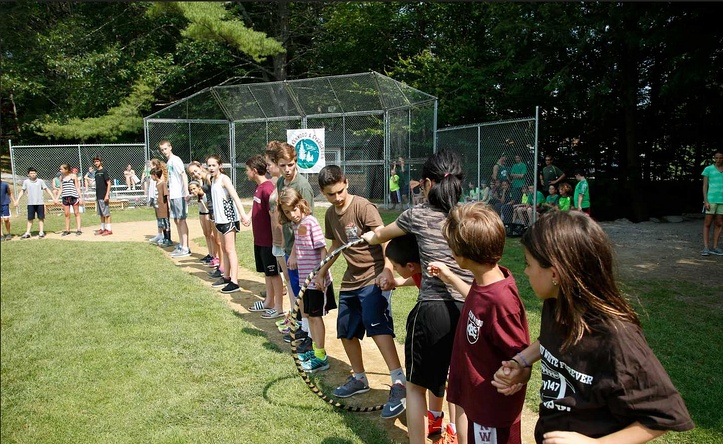 Clean Up: the two teams stood on opposite sides in a pen created in the theater tent. A variety of objects were placed throughout each team’s side of the pen. After the judge called out “clean up!” the teams began to pick up and throw the objects on their side. After a designated time period, the judge called “stop!”, and a count was done. The team that had the least number of objects on their side one. Each game had multiple rounds, and in between each round the coaches would facilitate for their kids a discussion about new ideas for how to improve their score. Camper with ideas got to be leaders by voicing them and trying to convince the group that they had a strategy worth trying. With each round the groups tried to figure out new and better ways to collaborate. 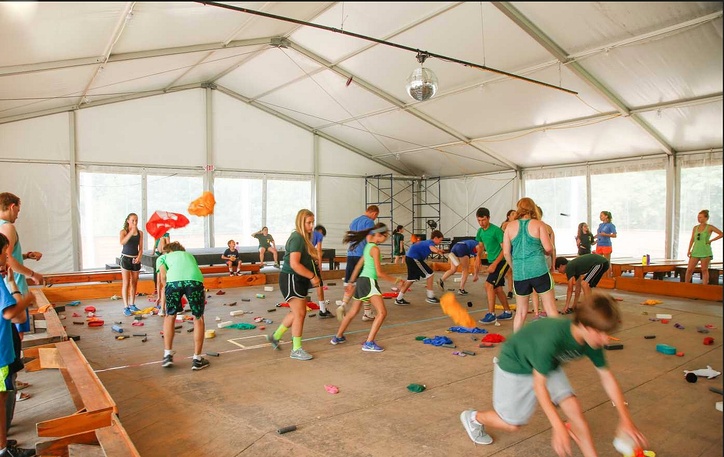 At all of the games our kids were laughing, having a great time being with each other, but they were simultaneously working on those vital 21st century skills. As I sat and watched them play I saw the teams slowly realize that there were many ways to tweak each game to improve what they were doing. This led to discussions about strategies and solutions, and the different ways to figure out how to master each game. Some used trial and error, while others employed more analytical skills. Some teams found that their oldest and loudest campers worked out most of the problems, while the most successful ones realized that the youngest or quietest campers often had the most novel solutions. It was a great day for fun play, but it was also one massive teaching exercise in the power of critical thinking, problem solving, creativity and effective communication. As I walked around all day this is the sort of 21st century skill building I saw over and over again.

Our kids seemed to experience this coed creative special event as a great day to be with their peers from the other camp. It’s always wonderful to see the friendships that develop during the summer between our boys and girls, even if they don’t interact with each other every single day. All in all, this really was an amazing special event, and a great time was had by all!

When Oddlympics came to an end our campers enjoyed cooling off for an hour or so in the lake. Today was such a fun, beautiful day at camp, and every really enjoyed recharging their batteries at the end. Tonight, Kenwood’s Junior campers watched their first movie of the summer, as did our Senior boys and girls. In announcing the title for the boys’ outdoor movie I said “it’s the single greatest basketball movie of all time” The counselors jumped up and down, excited that we’d be showing “Space Jam”. I hated to disappoint them but explained that the TRUE best basketball film ever was “Hoosiers”. Almost immediately after it started the kids were utterly silent, completely wrapped up in what for them is now a classic sport film. When Jimmy Chitwood announced his intention to resume playing ball they all leapt to their feet and cheered. It’s good to introduce young people once in a while to such “ancient” masterpieces…

Our happy campers are involved in amazing creative special events throughout the summer. Learn more about our exciting program, and the fantastic outcomes we create at our brother-sister summer camp in NH.