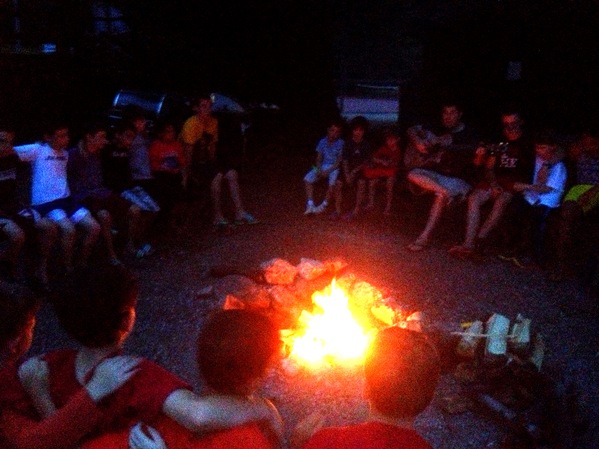 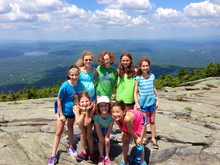 There’s been so much going on in and out of Camp in the past few days. This morning a number of different expeditions returned, including the Evergreen Sophomores from their Mt. Kearsarge trip, the Kenwood Inters from their Belle Island Canoe trip, and our Evergreen Seniors from their 3-day climb up and down Mt. Washington. Each group had gorgeous weather for their trips, and upon returning every camper that I spoke with had incredibly positive things to say about their journeys. Our girls on Mt. Washington loved the camaraderie of taking their longest trip ever, and clearly were shocked at how beautiful the view was from the top of the mountain. The Kenwood Inters packed a whole lot into their trip. They learned how to cook over an open fire, improved their canoeing skills, had a big sing-along with their counselor Jared who brought his guitar, and ultimately most of them chose to sleep directly under the stars. The Evergreen Sophomores got to the top of the mountain yesterday in just over an hour and a half, and after eating their picnic lunches ran around the summit picking and eating delicious wild blueberries. Before heading back down the girls all gathered together and tried calling me on my walky-talky, and were amazed that it was able to reach me at Camp!

As all of those groups were returning the Kenwood Juniors left for their own canoe trip, as did the Evergreen Freshmen for Mt. Kearsarge and the Inters for Mt. Major. It’s another beautiful night here in NH, and I can only imagine how much fun they are having on their adventures!

There were many, many great and different activities going on in Camp tonight. In Evergreen Junior Camp there was a favorite event called “Dutch Auction”. Rather than showing up with the most money, each bunk attempts to bring as many random items with them as they can carry in the hopes that something they brought will be on the list of items read off by the auctioneer. This event is pure K&E: it’s funny, it’s collaborative, and it’s all about creative problem solving. And the girls absolutely loved it. Our Evergreen Seniors divided up their night either practicing for the upcoming Tri-State Softball tournament, or practicing for the big musical they will be performing in just over a week!

Kenwood had multiple events going on tonight. Earlier today one of our Freshmen boys let his Unit Leader know that he wanted to make sure that their age group was as cohesive as possible, and requested that we host a freshmen-only campfire. It struck us as such a fantastic idea that we changed tonight’s plans around and started it just after 8pm. As you can imagine, that young man felt pretty listened to! When I arrived their unit leader was talking to them about their upcoming overnight camping trip, helping them understand the ins and outs of what to expect. And then to help them feel even more prepared the counselors taught the kids how to safely construct a fire, and how to make a dessert with bananas, chocolate, marshmallow and tinfoil. I brought my guitar and played a couple of tunes, including The Star Wars Song.

Our Sophomores hung out on the Evergreen Ballfield and had a Homerun Derby. As their counselors pitched to them each boy took turns trying to hit as many home runs as possible. Poor Bunk 3, which sits on the opposite side of the right field fence, took quite a pounding this evening!

The Inters boys spent their night up on the Senior Hill Basketball courts, taking part in a unit-wide slam dunk contest. We lowered the nets to about 5 feet, and watched as each of them came up with the funniest, most ridiculous methods for trying to get the ball in the net. Points were awarded for creativity, ambition, and my favorite category of all time, “unintentional comedy”.

After a hot day of playing a ton of sports we opened up the waterfront and let our Senior boys spend the evening swimming, diving, and tubing behind the motorboat. Afterwards, Scott had the 2nd years to his house, and I had the 1st years to mine. With our two respective groups we gathered together to find out how they felt about their summers and about life on Senior Hill. We also spent time talking with them about what their goals are for their time in Camp, and for their lives outside of it. We discussed what it means to be a man, a man of purpose, and a man of character. The boys jumped at the chance to have such intentional conversations, and we were grateful to have the opportunity. These conversations will continue throughout the rest of the summer, and hopefully for as long as we know them.