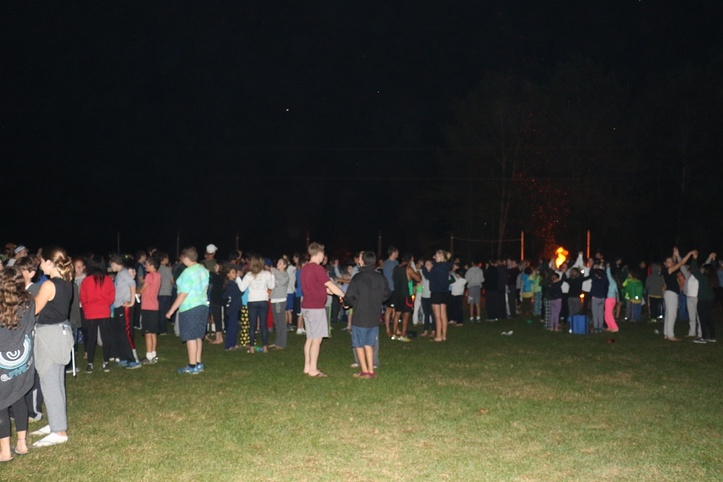 On this 4th Saturday of the summer our brother-sister summer camps slept in. We like to let our campers and counselors recharge their batteries on the weekend, so everyone slept an hour late.

Once reveille blew everyone was quickly out of the bunks. Many campers believed that this morning would be the start of our annual special event called Big Weekend…and they were right! 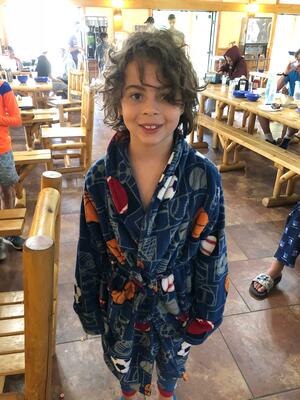 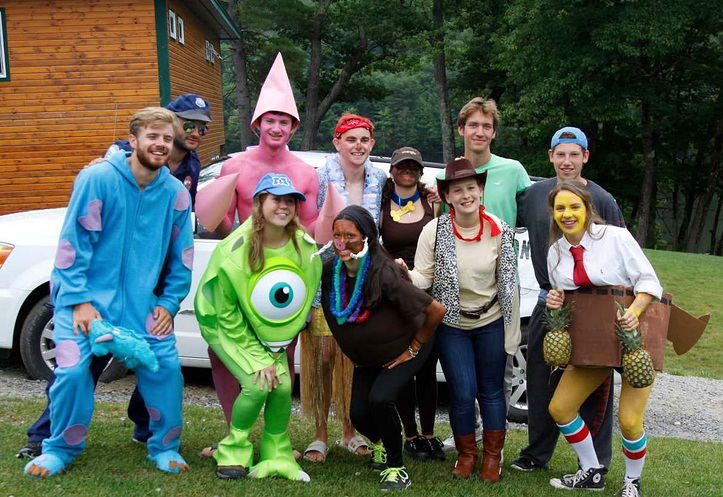 During morning assembly, after the different departments had checked in, Scott asked “are there any other announcements?” Suddenly a van with blue flashing lights on the roof and a police siren drove up to the assembly area. Junior Unit Leader Caleb Parker, dressed up as a police officer, announced that he had a group with him that were missing their partners and better halves. Out of the van came counselors dressed in amazing, ridiculous, super creative costumes. From around camp their partners arrived, and each duo put on a short skit. There was Sponge Bob and Patrick, Scooby Doo and Shaggy, Sully and Mikey from Monsters, Inc., Timon and Pumba from the Lion King, Thing 1 and Thing 2 and, of course, Woody and Buzz Lightyear. After they had all performed the kids and counselors cheered at the great show that their counselors had put on, and that it was officially the start of Big Weekend! 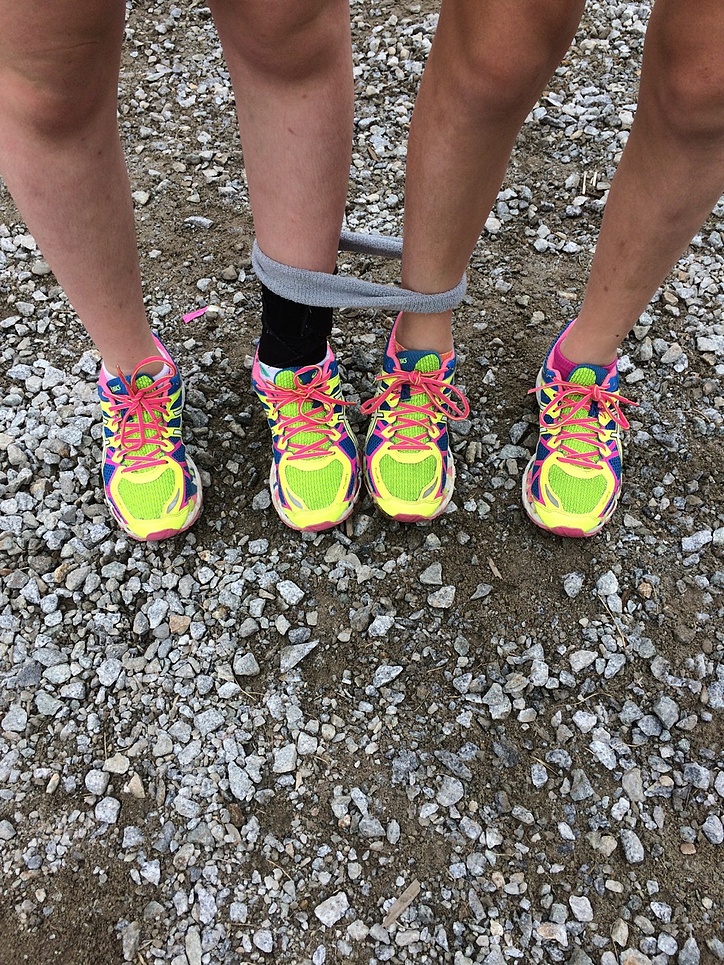 Anyone can play soccer, but it takes real skill to play it with your leg tied to a friend!

So what exactly IS Big Weekend? In some ways it’s like a miniature version of Color War, with some very important differences. During Big Weekend we divide the camp community up into 6 teams, all based on a theme. And over the course of 2 days campers participate in some traditional, and some creative, sports activities. So at one point today there were boys and girls playing traditional sports like softball, basketball and volleyball, and then later in the day they were laughing it up during events called “Lineup Ball”, “Minefield”, and “Blindfolded Soccer” (don’t worry, we don’t have our kids running with blindfolds on!). The goal of Big Weekend is to bring our two brother-sister overnight camps together for some fun, low-key, age-appropriate play, and to help our boys and girls make quality friendships with the kids in the other camp. There’s a great deal of singing, cheering, and team spirit. And when they are playing our more creative games, it’s a chance for them to work yet again on the 21st Century Skills that we have been focusing on all summer long (skills like collaboration, effective communication, leadership, and creative problem solving). This entire special event is organized by Jacki and Bob Mitchell, our super-creative athletic directors. Many thanks to them for all of the fun and excitement that they bring to our camp community each summer! 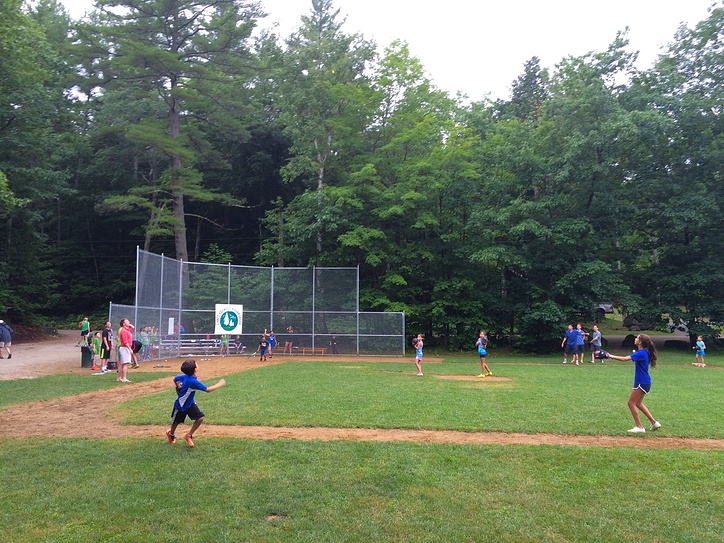 So after breakfast everyone went to the unit areas to learn what team they were on, and what color shirt they should wear today and tomorrow. For parents who wondered why the packing list required so many shirts of different colors here is one reason why! After a quick team meeting the campers and staff moved out to their first activities. 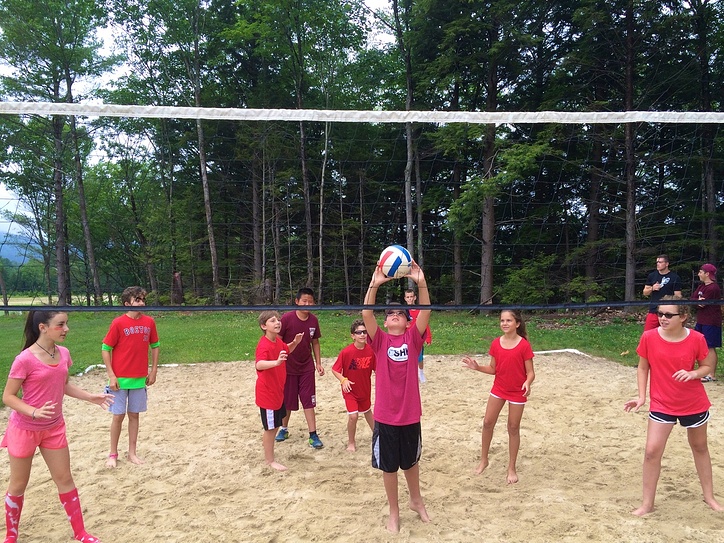 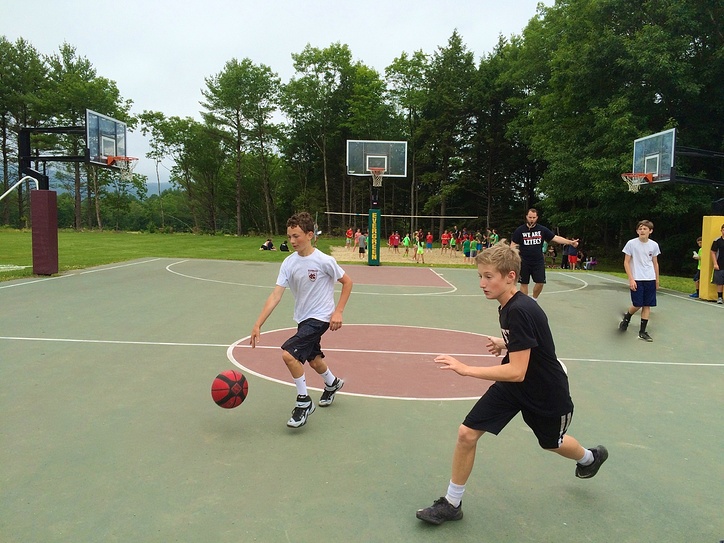 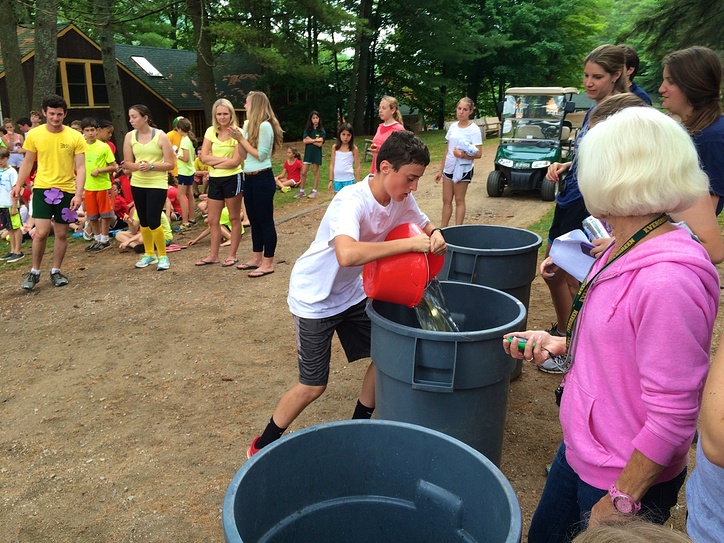 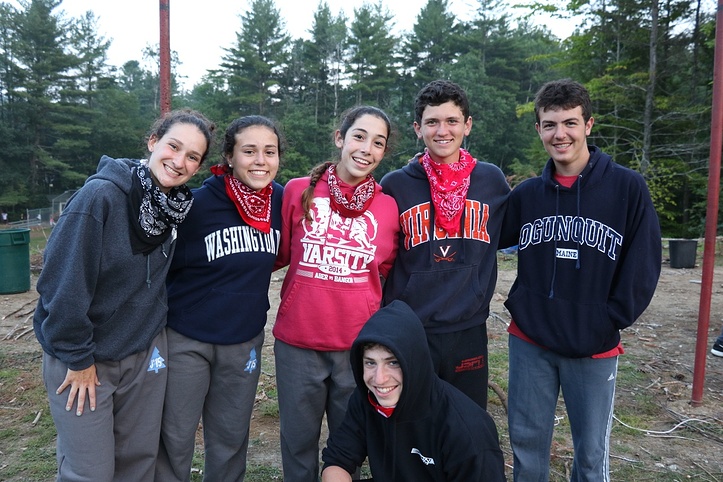 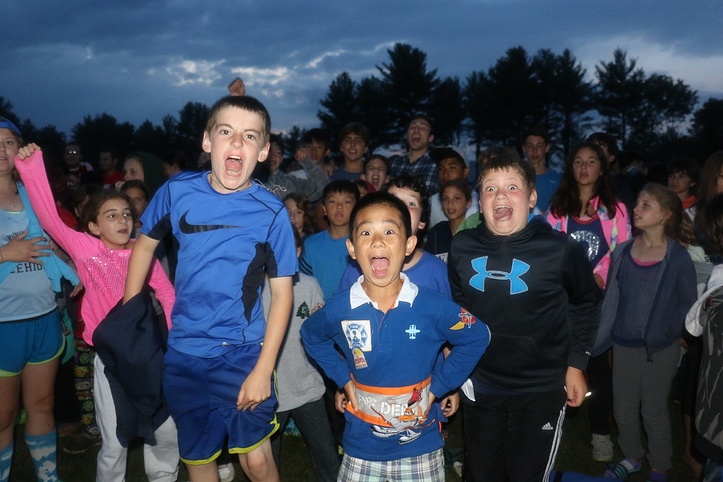 One of the best traditions at Big Weekend Rope Burning is how our campers get themselves psyched up each year. Rather than getting together with their teammates, our Hut 6 boys form a huddle and our Juniper girls do the same. They begin chanting the name of their cabin, and start leaping up and down in excitement. Eventually, both groups reach a fevered pitch, and then break to start the event. This ritual is all about them cherishing the many years that they have spent together, and savoring this moment. Watching it tonight I became a bit wistful about when my camp friends and I had the honor of participating in this ritual so very long ago… 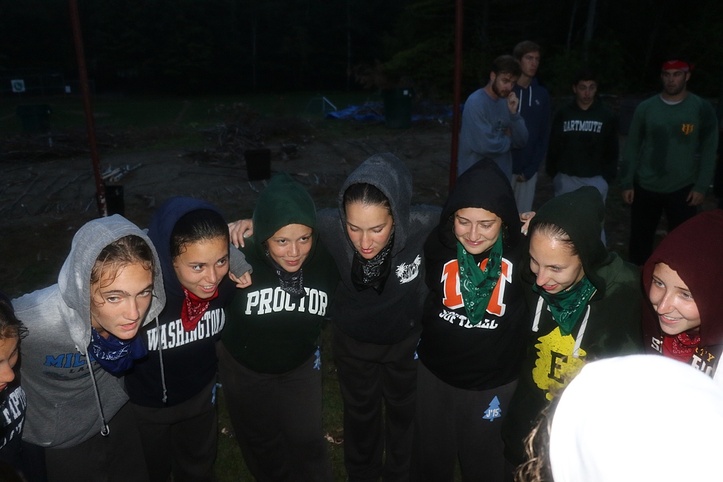 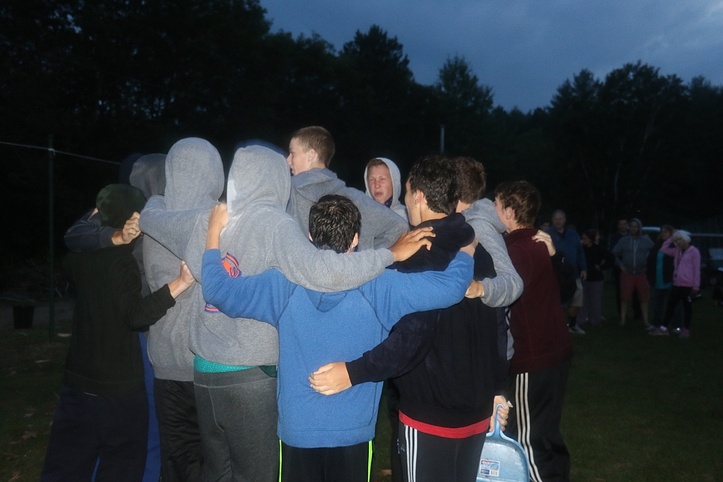 Once they had finished their psych up, Scott brought the whole camp community together. He explained the rules of Rope Burning, and then we began the countdown. The whistle blew and the 6 teams sprang into action. Some teams got their fire lit quicky while others struggled to light their matches. Some fires leapt into the air in under a minute, and their rope burned moments later. One group in particular struggled more than the others, and as each team finished completing their task, they ended their celebration and instead joined in helping their friends. Very quickly every rope burned, and every team walked away feeling a strong sense of accomplishment. It was great stuff. 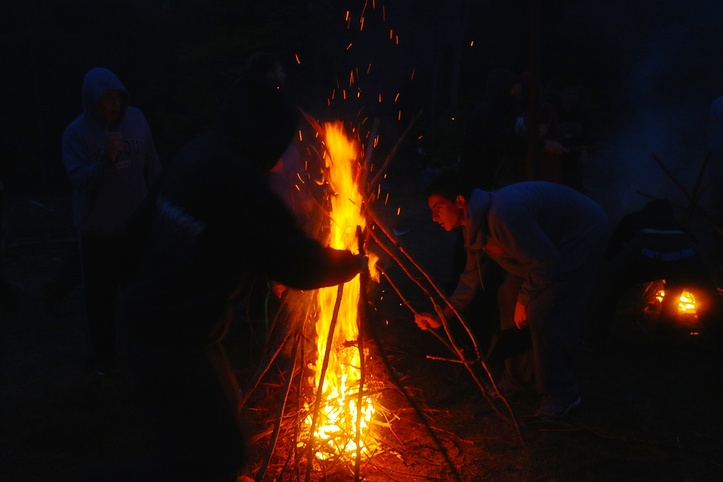 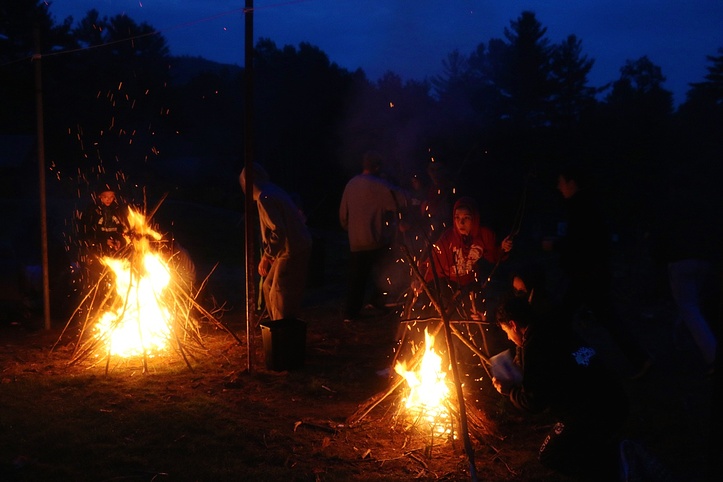 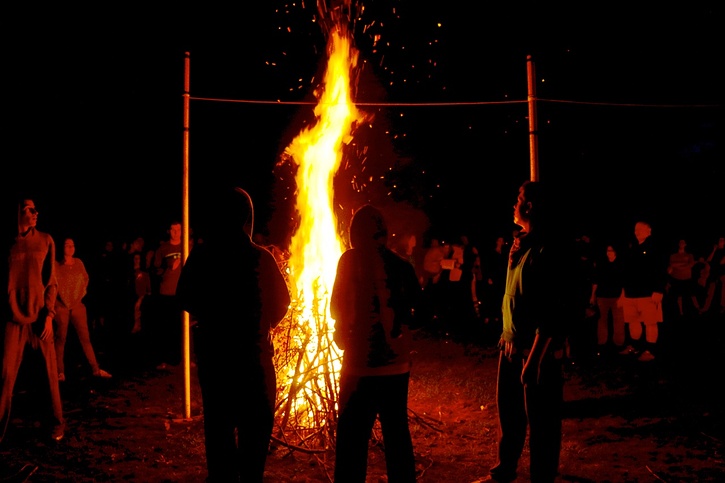 Campers from all six teams celebrated by jumping up and down and singing in support of their older teammates. What I love about our annual Big Weekend Rope Burning event is that after all of its team spirit and intensity, it immediately reverts back to what our camp community is all about. The participants on each team walked over to hug and congratulate each other on having completed this major rite of passage. Moments later the entire camp was holding hands, standing underneath a starry sky, singing Taps together. Watching our entire overnight camp community come together for a special event like this is one of my favorite moments of every summer. 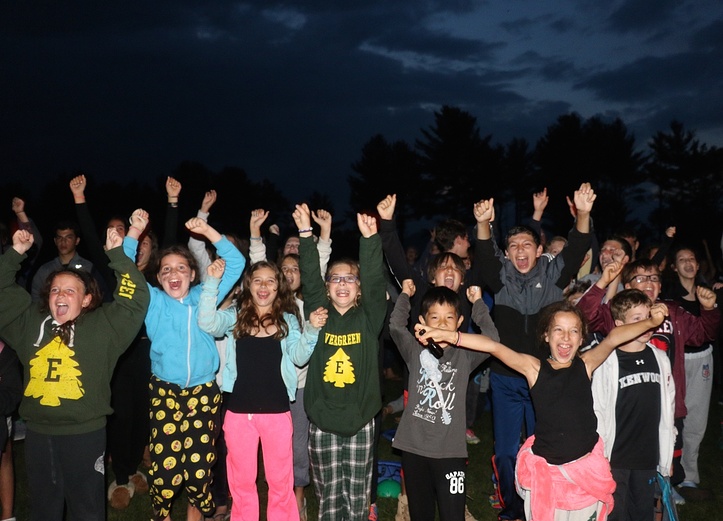 Please note that there will be no new blog tomorrow. Sheila will be posting photos. Thanks!

Camps Kenwood and Evergreen are brother sister summer camps in NH. On weekends we offer amazing, creative special events like music and film festivals, a carnival, goldrush, murder mysteries and more. Weekends are when we bring our two camps together for fun, coed events that teach 21st century skills like team building, cooperation and leadership.