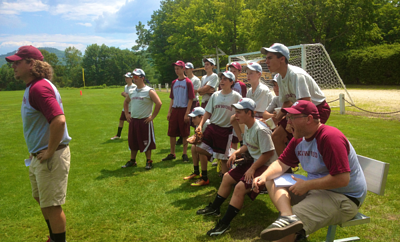 Incredible Displays of Teamwork and Creativity

As a community our mission is to enrich our campers’ summers with experiences that go beyond just having fun. We try to help them learn to be more collaborative, more creative, better problem solvers and better at working through adversity. Today was a day where this was on full display.

Immediately after reveille we had a disparate set of groups ready at the dining hall for a day of tournament play. Evergreen sent off its 11’s, 13’s and 15’s Tennis teams, and Kenwood’s 10’s Tennis, 12’s Basketball and 15’s Softball were also on the road. And while I am proud to say that all of them had some level of success in their respective standings, what clearly mattered most to our 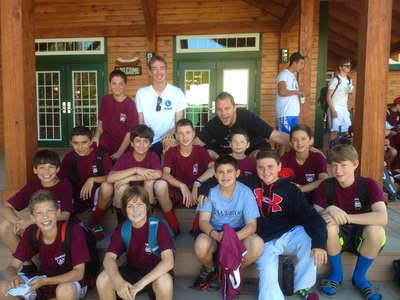 campers and their coaches was how they played together. After 2+ weeks of working together on drills and skills, what I heard from each group upon their return were phrases like “and we never gave up” or “our strategy wasn’t working so we huddled together and came up with a new plan”, or even “we were down by 5 but then we psyched each other up and ended up winning”. In every event today our kids were able to embody the true meaning of the word “team”. 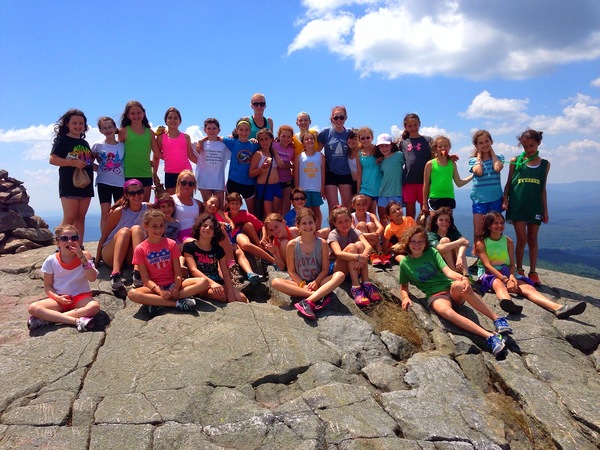 And yet these important life skills were not just on display on the ball fields and courts today. This was the case on our mountain climbs, bicycle rides, and adventure trips, and I know this because counselors sent me beautiful photos and texts that read “and they helped make sure that everyone got to the top at the same time” and “they all did it together, and look how happy they are that they did!” Those photos will be up on our Tumblr page tomorrow morning and I invite you to view them.

I could stay up all night writing about the dozen different examples that came up today, but I’d like to highlight one Kenwood event, and two in Evergreen.

Evergreen had two events tonight. One was called “Toilet Paper Fashion Show”, and like so many of the amazing events in our girls’ camp this was created and run by Mia. Just after dinner our Junior Camp girls gathered in the gym and were asked to cluster with their bunks. Each bunk was given a single toilet paper roll, and a roll of masking tape. From there each team had a half hour to plan the most elaborate, beautiful, creative, interesting “fashion” ensemble possible, using only these two materials.

From there the planning began. Some of the ideas that our girls came up with were astounding. One bunk decided to go with an Ancient Egyptian theme, and came up with a plan for a headdress, tunic, pants, sandals, jewelry and scepter. Another bunk designed a flowing skirt with rising hemlines, coupled with a matching carry on and head decoration. A third bunk created a beautiful wedding dress concept, complete with a flowing train and a basket for carrying flowers. Like so many of the activities that we do here our girls simply experienced this as an opportunity for fun with friends. As the adults what we saw were girls using their voices and taking meaningful leadership roles, expressing their ideas for creativity problem solving. We also saw teams working together on a project helping each member determine what skills she could bring to the effort. These are the 21st Century skills that we work on each and every day here, but for some reason tonight’s activity felt like an extra special moment for creating these outcomes.

While our Evergreen Junior Campers were in the Gym, our Evergreen Seniors were in the dining hall for their first-ever Bake Off. Under the tutelage of our new head of the Cooking Program, Rachel, our older girls were using the same skills that they had learned at Evergreen to see who could create the most delicious Rice Krispy Treat possible. Again, the event involved strategy, teamwork, collaboration, compromise, leadership, and just a little grit for those moments when setbacks occurred.

This was an incredible night in Evergreen, both for fun and for applying all of the skills we have been working on since the start of the summer.

As I said before, today was also a very big day for Kenwood. Most notably, today was the annual Tri-State Softball Tournament. Tri-State, as it is routinely referred to, is the oldest summer camp sports tournament in the nation, and it is hosted by K&E. Camps from far and wide travelled to play our oldest boys in a fast-pitch, double-elimination softball event.

Some of the camps that participated today have twice as many boys as Kenwood. Some of them also had players sporting 5 o’clock shadows. Amazingly, none of it seemed to rattle our boys. Instead, they stepped onto the diamond for their first game with a true sense of purpose. They were focused and they were determined. They communicated with one another before, during and after each play. They found energy when a teammate made a great play, and supported each other without ever getting down when a catch was missed. Their bats seemed to connect at every opportunity, and the score showed it. When it reached 18-1 the umpire ended the game prematurely and called it for Kenwood.

The second game was in the middle of the hottest part of the day, and against our biggest rivals. We started off with some quality hits, but sometime in the early innings fell behind by 5 runs. Jimmy, our Tri-State head coach, brought the team together to remind them of everything that they had been working on since the start of Camp, and how powerful a team they were when they worked together. He outlined a plan for reclaiming the game, and within one inning Kenwood was back on top. Our boys were never again behind in the game.

Then they broke for lunch, cooled off in the shade, and more games were played. At 3:30 they began the final game of the tournament, yet again playing our biggest rivals. This time our pitcher was a bit more tired, and their team was finding holes in our outfield. In the second inning we were suddenly down 7 runs, and yet there wasn’t a somber face on the Kenwood squad. At every possible moment the entire bench was cheering as if the ending they wanted was inevitable. With one out a blooper landed in center field. Then a line drive shot past the second baseman, and it was followed by a walk. A cheer came up of “The ducks are on the pond! The ducks are on the pond!” One of our Hut 6 boys stepped to the plate. This was probably the single biggest at bat of his entire life, and he seemed calm and collected. With the full support of his teammates he took the first two pitches, waiting for a strike. The third one caught the inside corner. The fourth pitch was low and outside, and he clubbed the ball so hard that the right fielder barely had control of it before he and the rest of the runners had reached home.

Our boys took the lead and never looked back. They had been the underdogs in their own tournament, and twice faced the team that had beaten us to win last year’s Tri-State. Not once did they show a moment of hesitation or doubt, and they beat their opponents through teamwork, communication, and a whole lot of grit.

When their bus took them back to Camp the entire community was waiting for them in the Hollow. As the doors opened our younger boys and girls swarmed around the team, enveloping them in cheers and applause. It was truly a moment that I will never forget.

It, of course, feels good to win, and I am so glad that our community had the chance to experience such a fantastic triumph. But I am more excited at how our Tri-State team arrived at their win, as I know that each member of the team is fully conscious of the many skills they used to achieve this spectacular moment. The same is true of our girls, who tonight were able to articulate that our evening activities were not just about having a silly, funny time with good friends. They recognized them as moments that reinforce the power of the life lessons we all learn here each and every day, and will take home with us at the end of the magnificent summer.