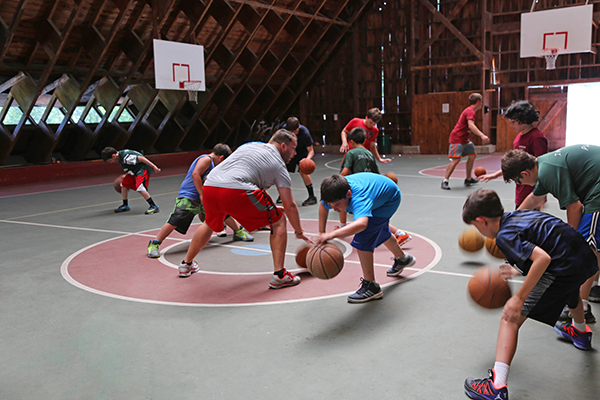 So how exactly do you run activities at a summer camp for 21st century skills? How do you teach and coach sports while also focusing on character building? In last Tuesday’s blog I profiled Andrew Disbrow, who has been the head of our ceramics program for the last 18 years. In it Andy outlined how he balances a camper’s need for learning both soft and hard skills (e.g., learning how to throw on the potter’s wheel while also becoming more creative and more independent). But how exactly do we teach skills like executing a pick and roll while also making sure that our campers learn resilience, critical thinking and collaboration?

Well, this week it is my pleasure to introduce you to Coach Chris Straker (@CoachStraker on Twitter and Instagram), the longtime head of our basketball program. Chris is the consummate Kenwood and Evergreen coach. He’s exciting, he’s passionate, and he’s incredibly nurturing. He’s an amazing sports coach, both for how he imparts technical knowledge about the game, and how he tries to help our campers grow. 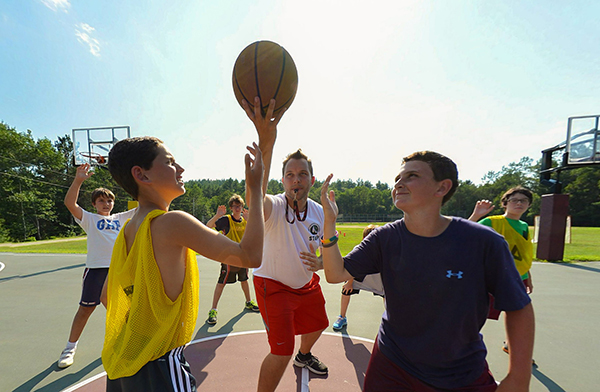 Chris has 13 years of advanced level coaching experience under his belt with European basketball, including stints as a head coach with women’s club teams such as Leeds Carnegie, Manchester Mystics, as well as the North West U17 regional squad.

He also served as associate coach with the Great Britain U20 and England U18 national teams. Under his tutelage, Coach Chris’s teams have captured three national titles, while many of his pupils have secured Division I collegiate scholarships in the United States or have gone on to play professionally in Europe.
In addition to this, Coach Chris has extensive experience in youth development, coach development and mentorship. His dynamic, inventive coaching & teaching style ensures an enriching, fulfilling and fun educational experience for all those who participate.

At Kenwood and Evergreen, we feel that Chris’ greatest strength as a coach and teacher lies in his ability to use sports as a vehicle for positive developmental change. His practices and activity periods are always incredibly engaging for our campers. At the start of each summer I regularly hear from a small group of new campers “but I don’t like basketball”. With a smile I always say to them “maybe…or maybe you just haven’t had a coach like Chris”. Though his practices are rigorous and challenging he somehow finds a way to win over every camper he meets!

When I asked Chris this fall about why he likes coaching at our overnight camp in NH so much he said this:

At K&E I not only get to coach basketball but I get to help kids build the skills that are central to our camp’s ethos: leadership, communication, critical thinking, persistence and working with others to name a few. To me the key is that coaching is not about telling people what you know or telling them what to do. Coaching is about facilitating people’s development so that they can unlock their own potential and in doing so can maximize their own performance.

At K&E this is fundamental to how I design and coach my sessions. I aim to put the campers in activities where each goal is clearly defined. From there the campers have the task of working out how to achieve that goal either individually or as a team. This will involve using the skills we continually work on through the summer (examples include critical thinking and working successfully with others). Integral to my own coaching style is the use of questions, rather than constant instruction. I want our campers to be engaged and to think for themselves, rather than having me always giving them the answers. This dynamic gives the campers ownership of their sessions and an elevated understanding of what we are doing.
Finally I think it is essential to my coaching environment that the campers are encouraged to show leadership and effectively communicate with each other. In almost everything we do there is an aspect where the campers have to work on communicating with each other, and in every session there are opportunities for everyone to show leadership within the group or team.

An example of how I fuse the hard and soft skills together comes out in how I run my drills. I like anything that has organized chaos. The drill usually starts off being very difficult and it does not look good, but quickly campers start to understand the issues and figure out how to solve the problems. In these moments leaders start to emerge within the group, and by communicating with each other the campers start to achieve what they though was impossible.
However, what really makes my heart jump in our sessions is usually when we are playing small sided games like 2vs2, 3vs3, 4vs4, or conditioned games or maybe even we are playing regular 5 on a side. At some point a camper applies a concept we have been working on throughout the practice and successfully executes the skill in a game-like situation for the first time. It’s an incredible example of applied learning, because now they have learned to use this new skill in a game setting, and that’s what it’s all about. There is nothing better than when a camper says to you “I never knew I could do that” or “I thought I was not good at basketball, but I did that well”. That’s when I feel like we are achieving what we are aiming for here at our overnight camp.

I see that emphasis on both the hard and soft skills at every activity Chris runs, and it’s clearly why he’s so popular amongst our campers and parents. The opportunity to work with such a passionate, talented coach is a privilege we our honored to offer our campers.

Camps Kenwood and Evergreen in New Hampshire is the 7-week summer home for children from around the world interested in playing team sports, making lasting friendships, creating incredible art projects, and mastering the 21st century skills they will need to become tomorrow’s leaders and innovators.