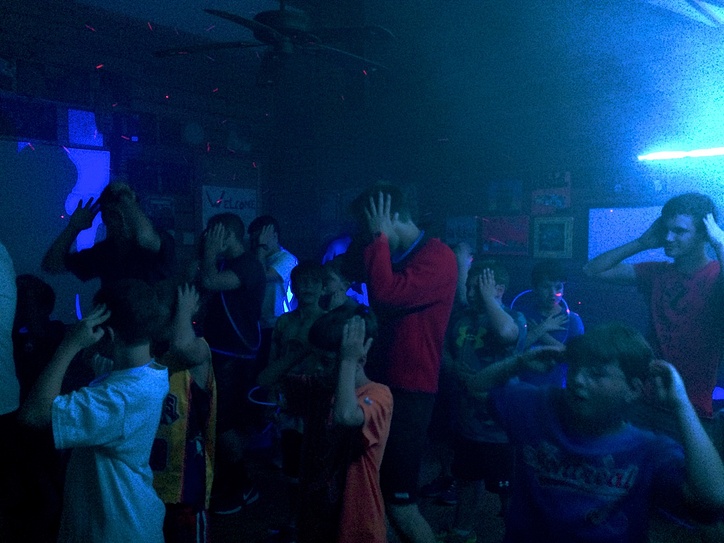 Good times with great friends at our overnight camp in NH

Today was a lovely day at our overnight camp, from start to finish. When I woke up the camp just after 7:30am the sun was shining and everything looked beautiful. As is the case on such nice days, everyone walked up to breakfast in a really good mood. From there until the sun set everywhere I went I saw people having good times with great friends.

After morning assembly a number of tournament teams left for their day of sports competitions, including Kenwood’s 15’s Basketball and Evergreen’s 14’s Volleyball. 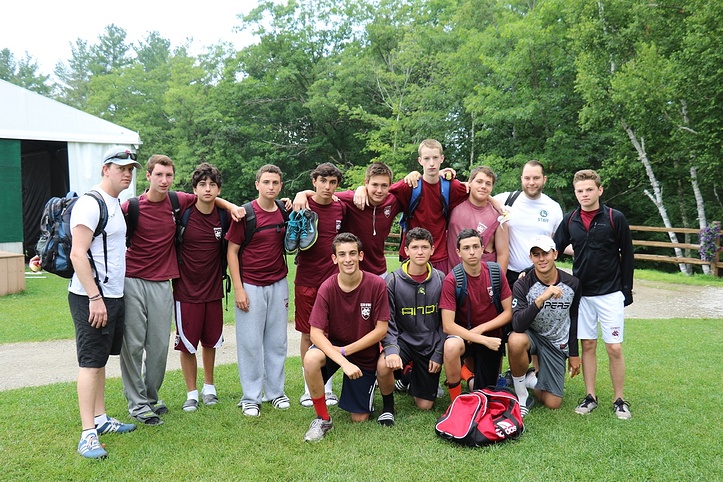 We also had a number of outdoor adventure trips leaving and returning. Our Evergreen Sophomores and Juniors came back from their successful mountain climbs and overnight camping, and our Evergreen Senior girls headed out on their 3-day expedition up Mount Washington. 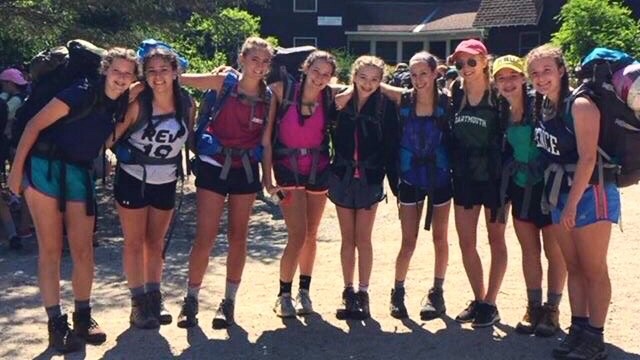 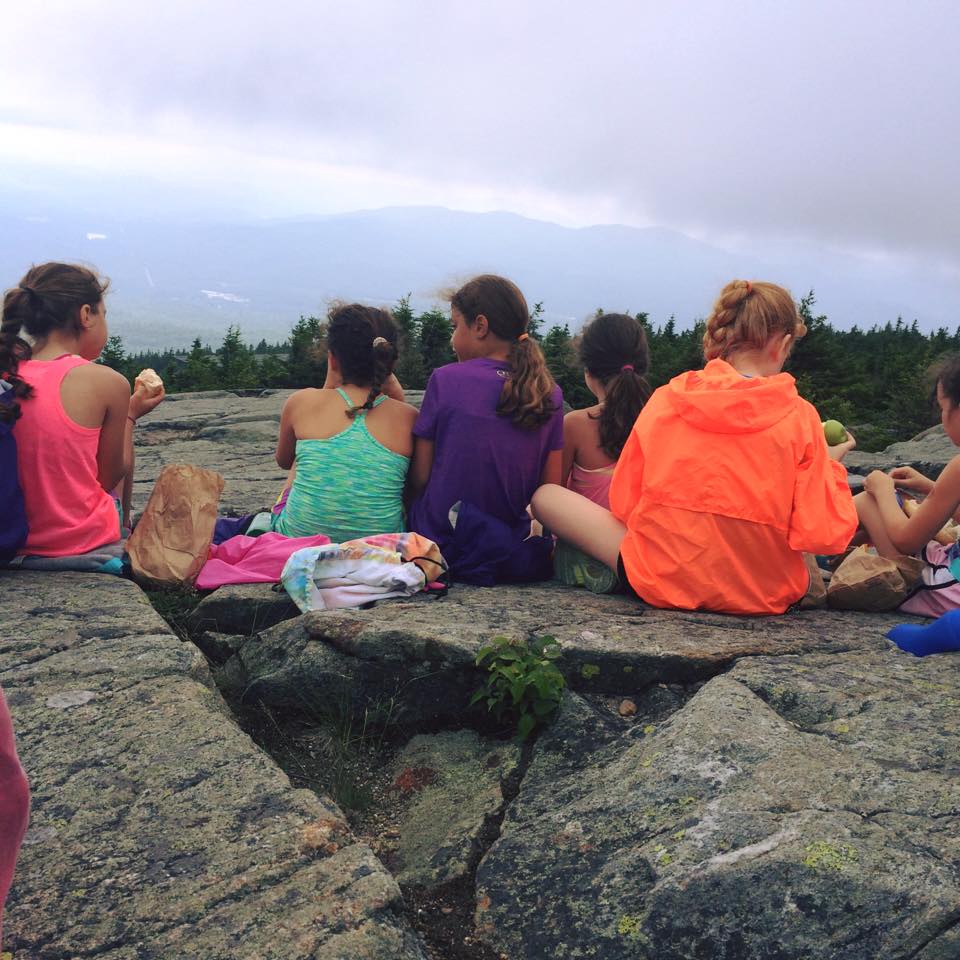 Both of our returning trips had a blast yesterday. After reaching the summits they gathered for lunch, picked wild blueberries, and then returned down to the halfway points. After setting up their campsites and having a good swim they helped their counselors start the fires, cook the food, and then learn how to make incredibly delicious desserts. 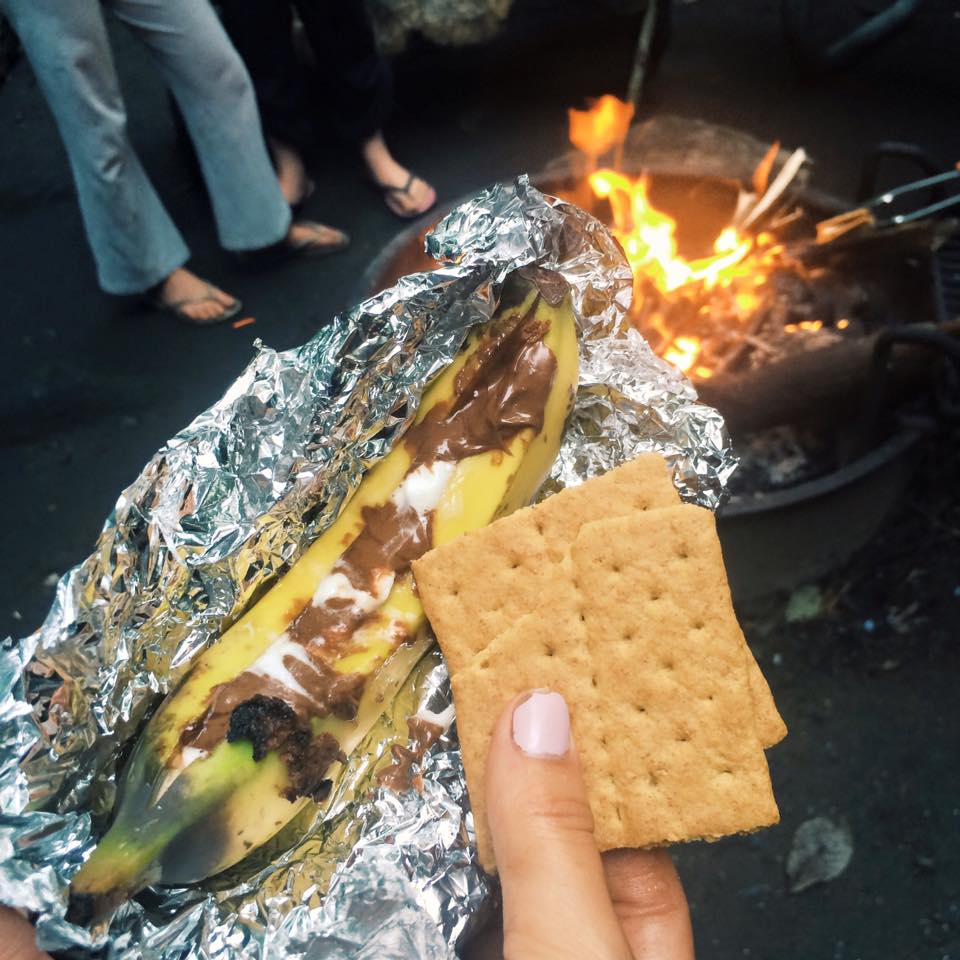 Back at camp it was a terrific day of teaching and learning at activities. Coach Erin was running basketball drills and scrimmages with our girls. 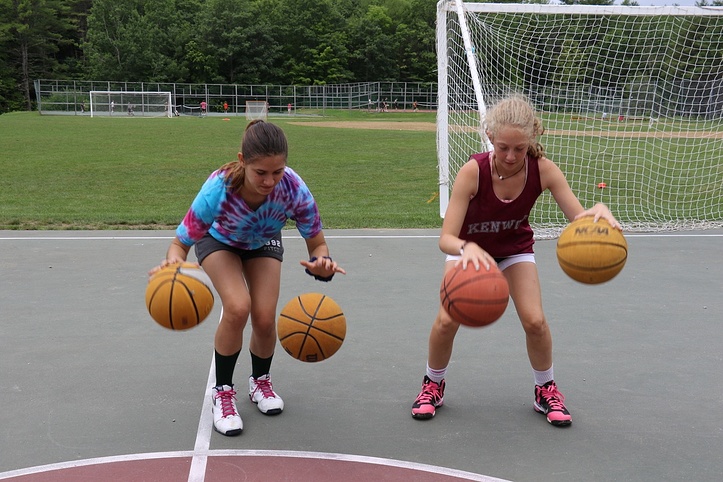 I hung out on the Field of Dreams and took what is now my favorite Kenwood Ultimate Frisbee photo. This was not staged. I was lining up the shot and all of a sudden there was Matt, full of intensity, trying to help his team. I didn’t see him until he was in front of my lens. 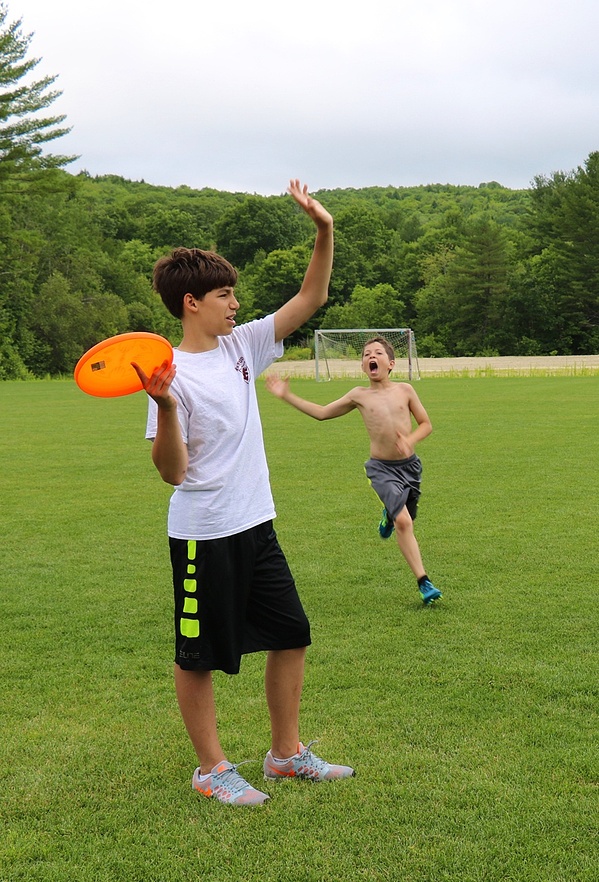 The counselors at the Ropes Course spent the morning doing team building exercises with our girls. What you see below was more than simple tug-of-war. The staff had hooked up the rope and carabineer to a device used to absorb shock while climbing. Given the right amount of force (no small amount) it would release a small amount of slack (it’s used to prevent a fall from being too jarring). The challenge was whether or not a group of our young girls could martial strength to yank this object into any level of release. I’m proud to say that they did, and there was much rejoicing at the Ropes Course! 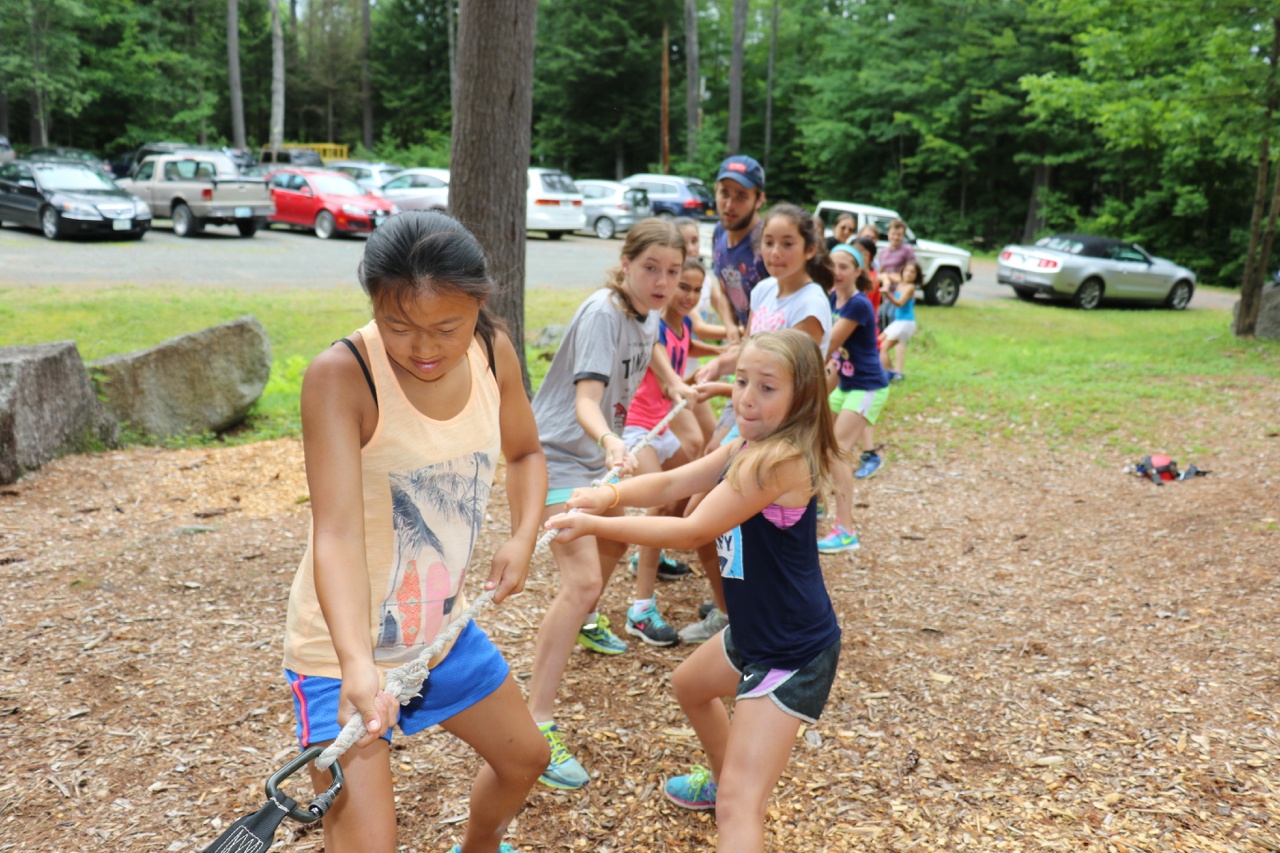 Steve and Jacki were running another great Softball clinic on the Evergreen ball field. The girls are really starting to come together as a team, and we can’t wait to see what they do in their upcoming tournament. 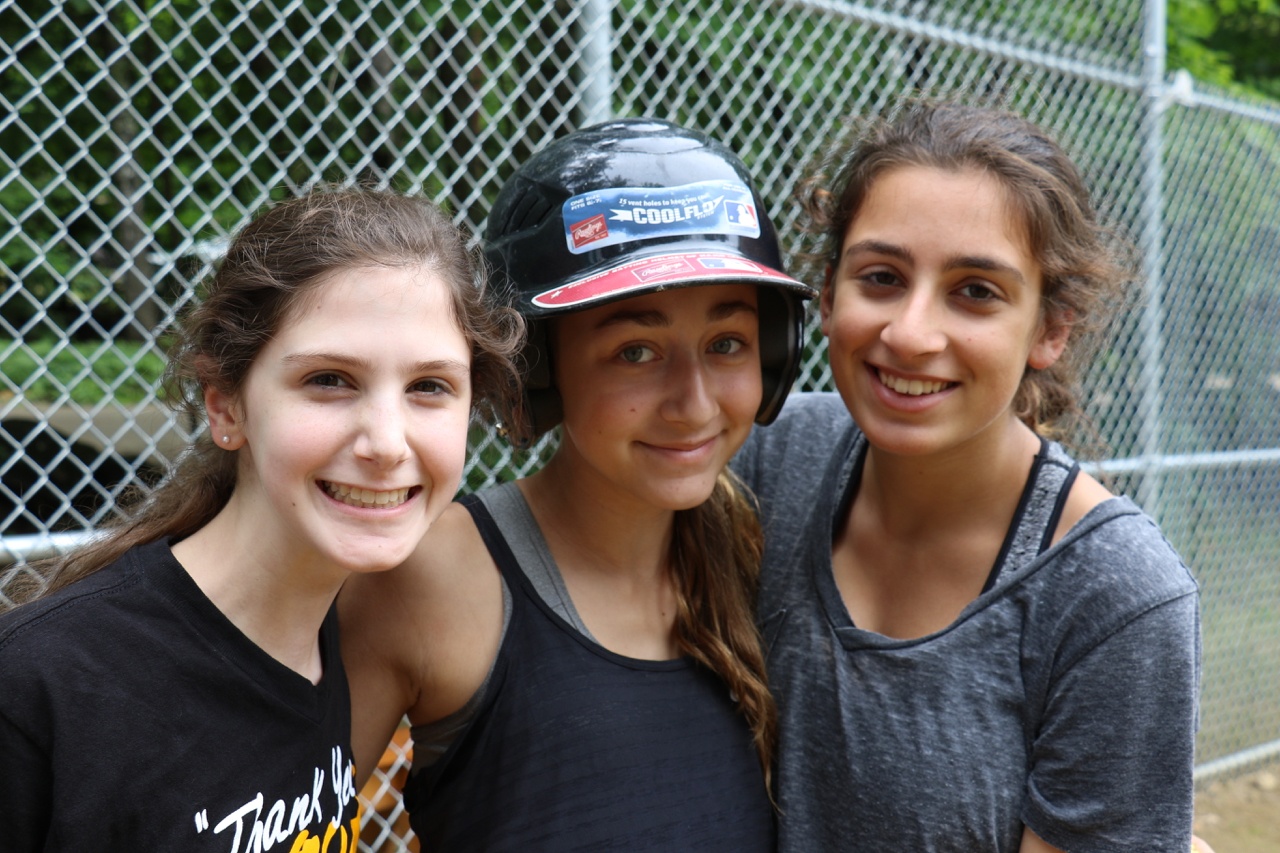 I hung out for a while at Gymnastics, where the girls were taking turns practicing and perfecting their round offs and hand springs. 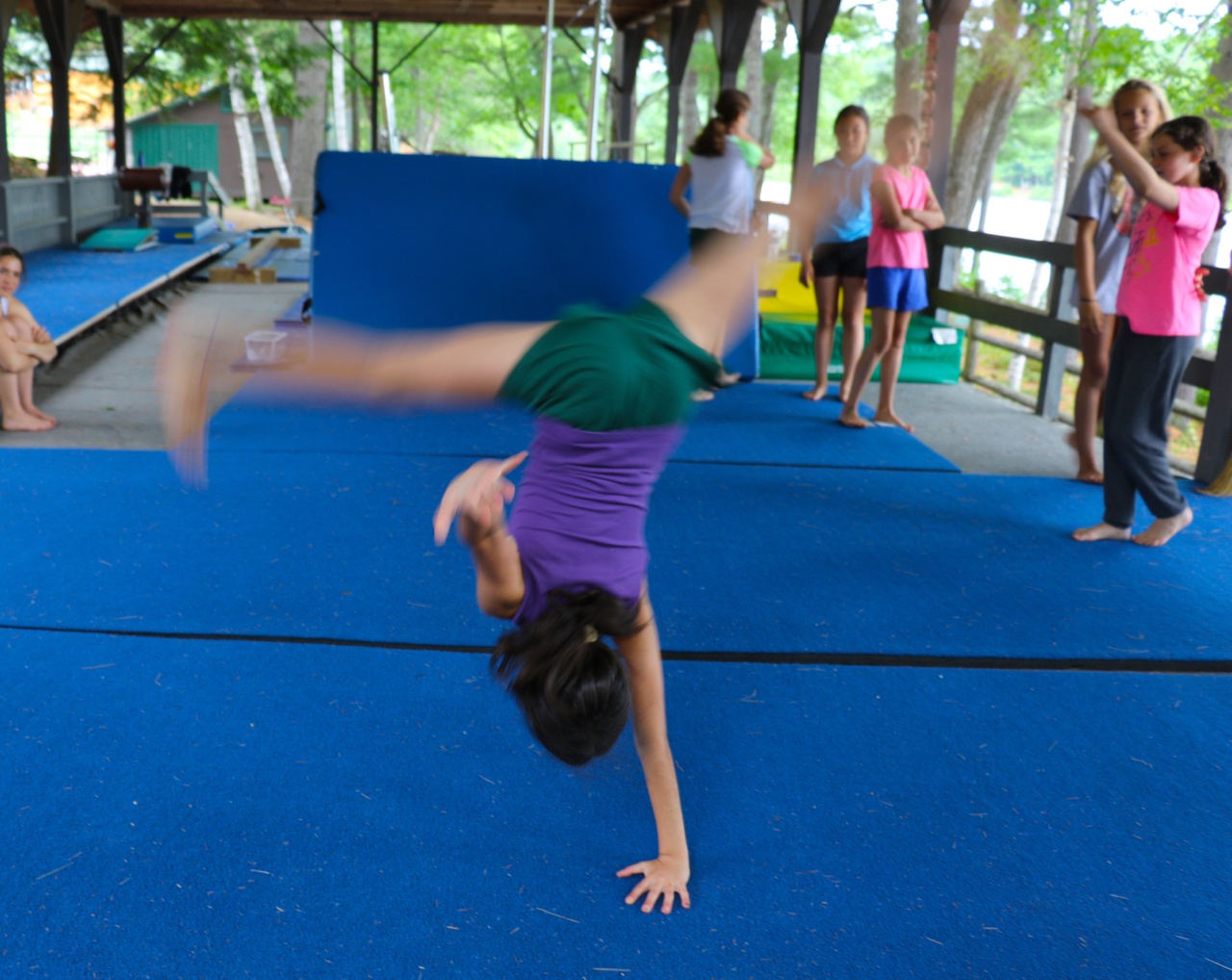 Adjacent to the lake our Senior girls were having a blast on the Rock-It. This is the newest piece of equipment on our waterfront, and it’s essentially a cross between a water seesaw and a mechanical rodeo bull. The girls took turns rocking it in different directions, trying to launch each other off and into the water. As you can, they were having a blast! 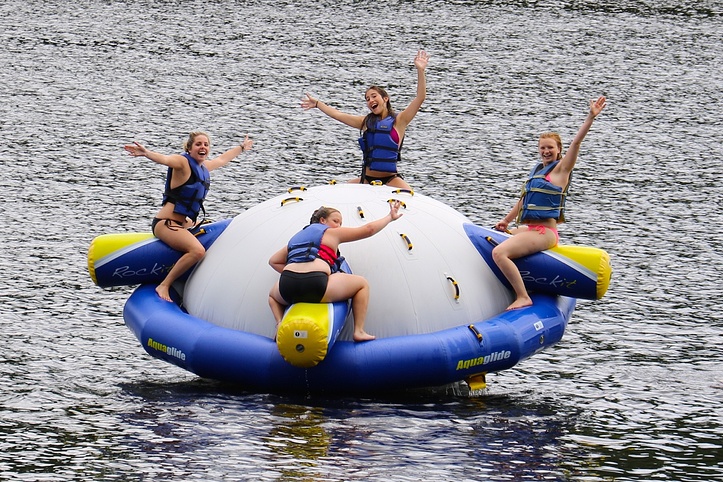 It’s Space Week in the Arts & Crafts studio. Campers were covering balloons in paper mache to eventually design their own alien faces. Other campers were creating space suits, and this guy made a rocket with streaming fire coming out of the back. Arts & Crafts is a VERY creative place this summer. 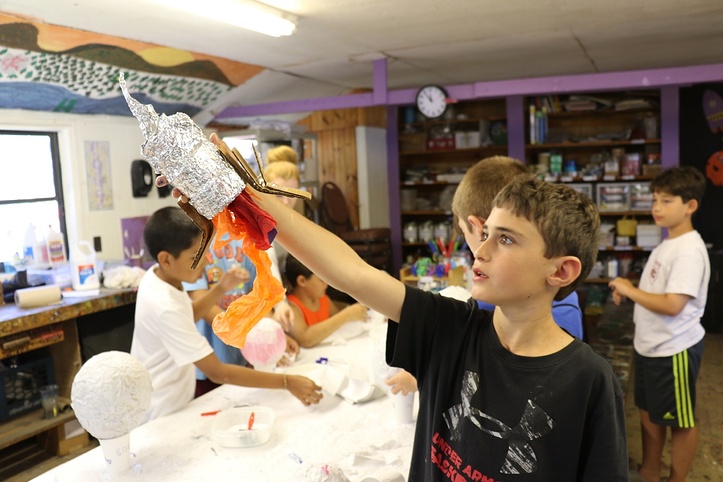 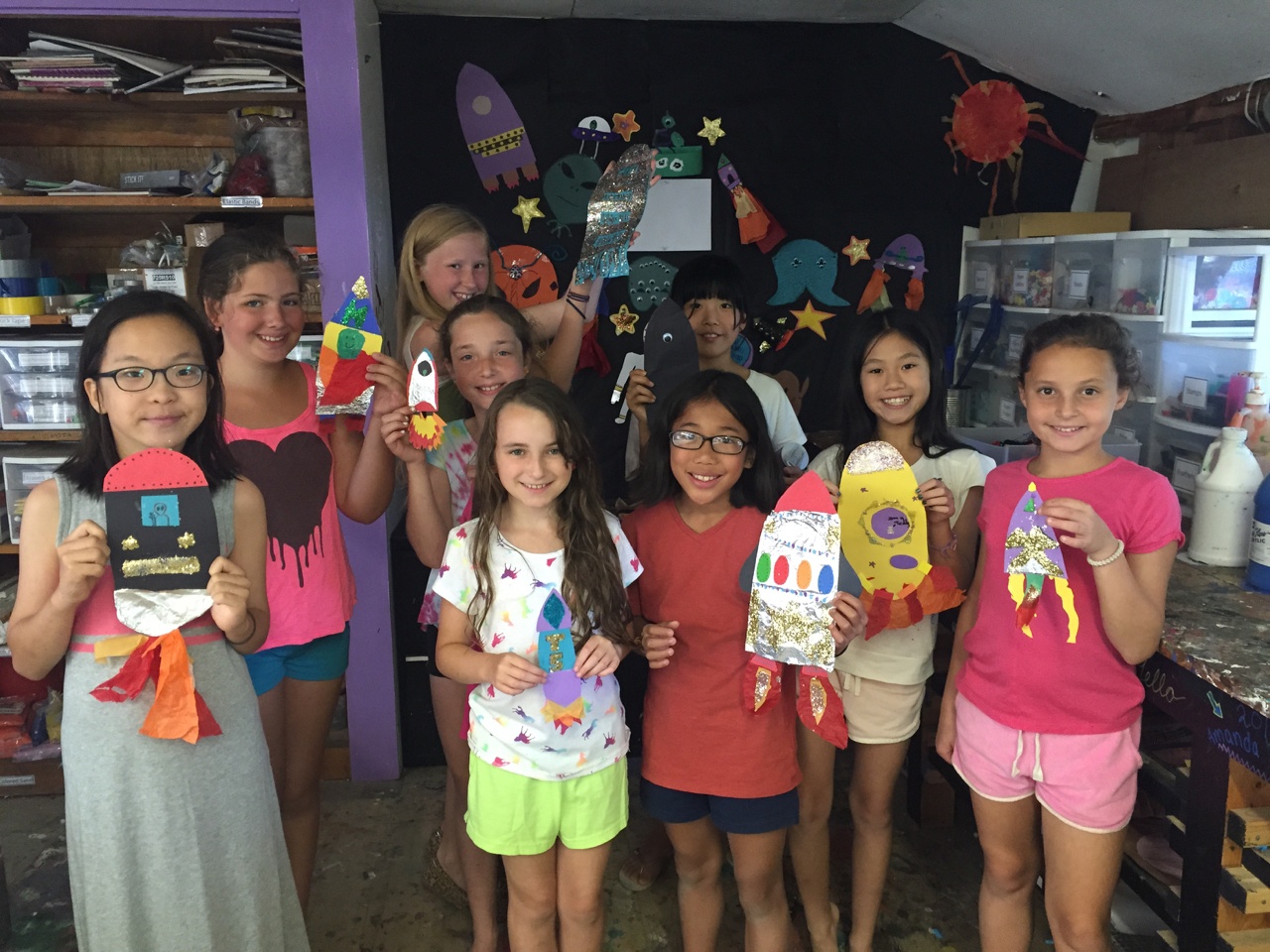 From there I wandered down to the waterfronts. With the weather so warm and sunny just about everyone was in the water. I saw kids water skiing, wake boarding, fishing, diving, and taking swimming lessons. Girls and boys were also busy swimming laps to raise money for Mickey’s Kids, a charity that helps provide camp scholarships for children in need. 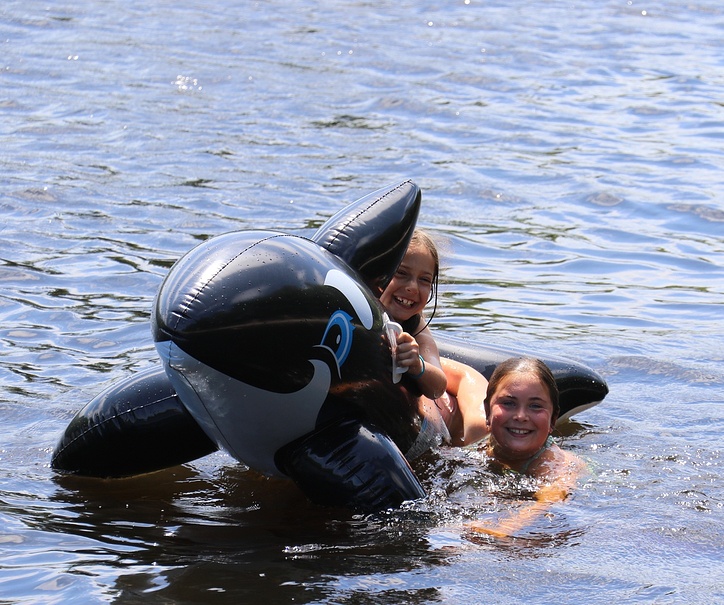 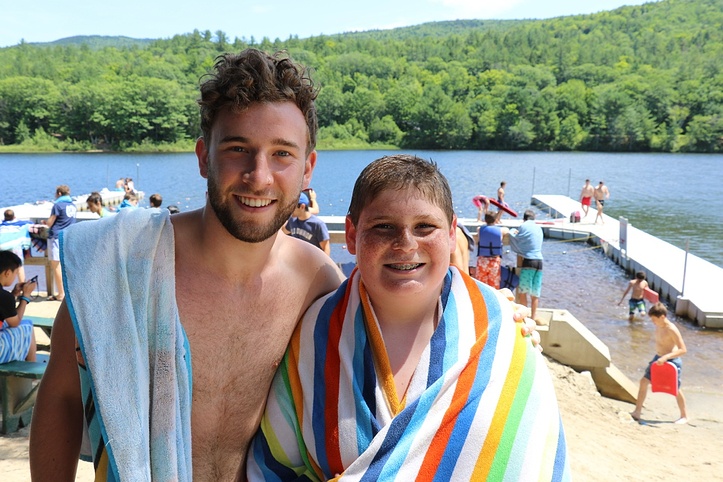 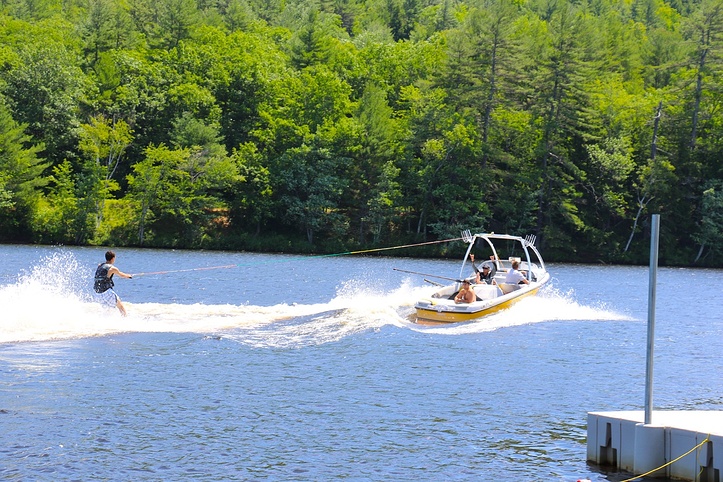 During rest period I strolled around Kenwood Junior camp and spent time in each of the bunks. Wherever I went our campers were together, hanging with their camp friends, just loving their time together. I saw such happy little faces reading comics, playing Uno or board games, or just talking about…well, I’m not quite sure because often times they’re talking about some Youtube series that I’ve never even heard of but they all think is ridiculously funny.

I find it so interesting how quickly our campers have been able to become great friends with people that they had never met 3 weeks ago. Just in this picture below we have campers from Connecticut, Massachusetts, New York City, Westchester, Florida, Long Island, and Upstate New York, and as you can see they couldn’t enjoy being together more. There really is something incredible about the friendships that you make at summer camp. 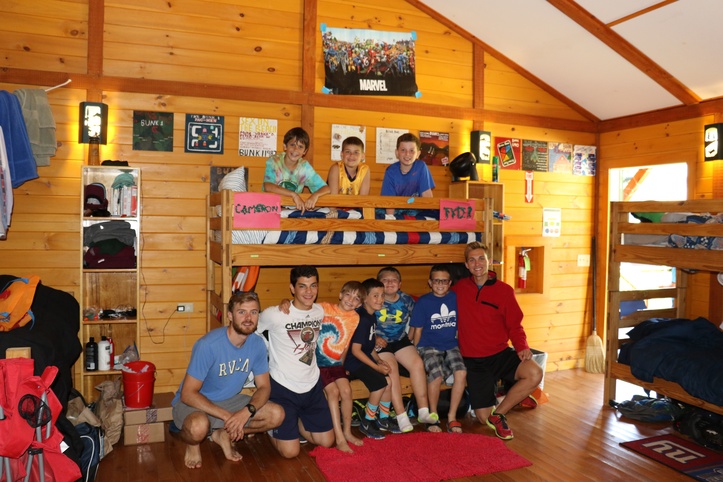 Like these guys. As we were hanging out one of them excitedly said to me “can I show you the TV show that we made?” Of course! Borrowing a digital video camera from our Film department, the four boys in this bunk and some of their camp friends have been filming a regular comedy show during their free time. They showed me the first 40 seconds and I must admit that I laughed out loud. It was genuinely funny.

Now that they’ve shot all of the footage they will spend the next few Film periods editing it for our film festival in August. 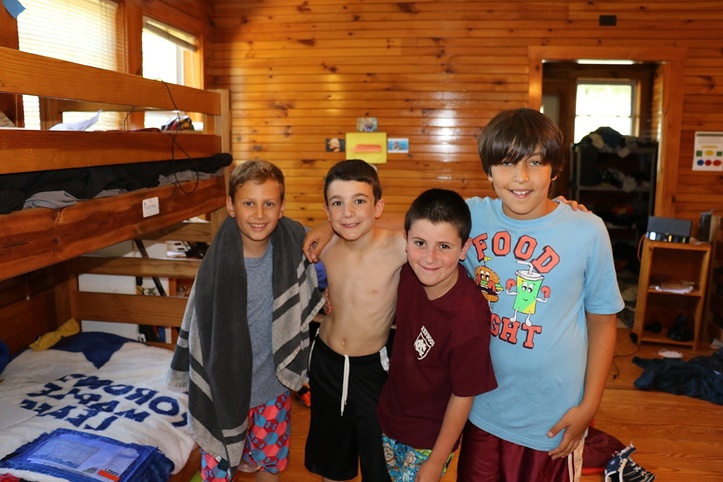 Rest Period is not always the easiest time of the day. Because it isn’t structured and programmed it can be a great time for bonding…or a time when some homesickness develops. Our counselors spend a lot of time, especially during the beginning of the summer, helping our campers learn how to spend their unstructured time, since it is often their first time ever having summers unplugged from the virtual world. Today I saw a great example of kids learning to use this time masterfully.

On their own, these guys came up with a fun, innovative way to use this time, and use it to make each other laugh. These are the sort of moments that make up every day here at our overnight camp in NH, and make me so proud of the sort of 21st century skills our campers work on each summer. 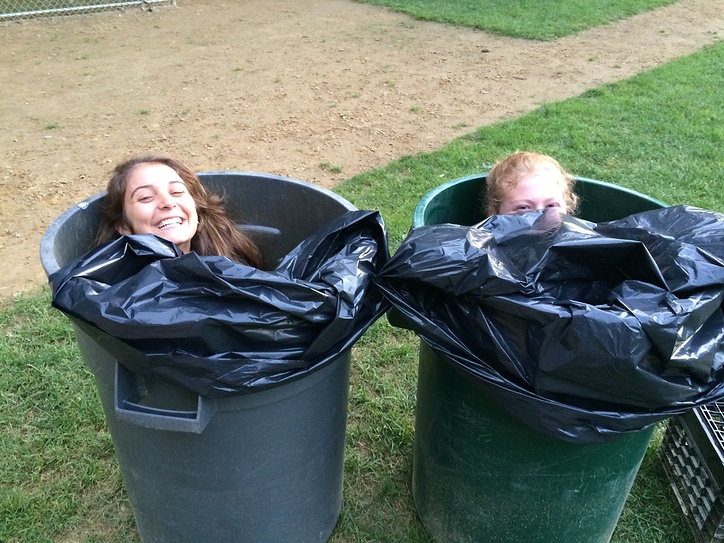 Tonight our Evergreen girls took part in one of the highlight evening activities of the summer: Counselor Hunt. Every female counselor had a 10-minute head start to find the best hiding spot she could locate. Some wore camouflage and some tried to outwit their campers with unique costumes. Two counselors even proudly hid under a wet tarp. The two counselors in the picture above hid inside garbage cans in the middle of the Evergreen ballfield. When I walked by them I asked out loud “why are these two cans out here in the middle of the baseball field?” All I heard in response was the stereo sounds of “shhhhh…” 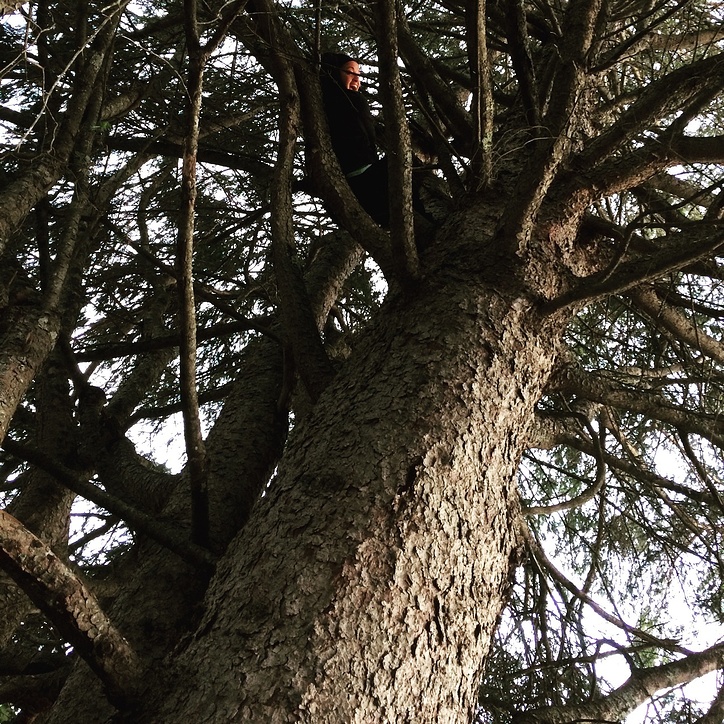 On my way to the Kenwood Freshmen & Sophomore Compound I heard rustling in a tree and looked up to see Erin, our head of basketball, about 30 feet up in the air!

So many of our counselors were fully committed to playing this game with the same level of intensity as the kids. I just love how enthusiastically our campers and counselors embrace special events like this. 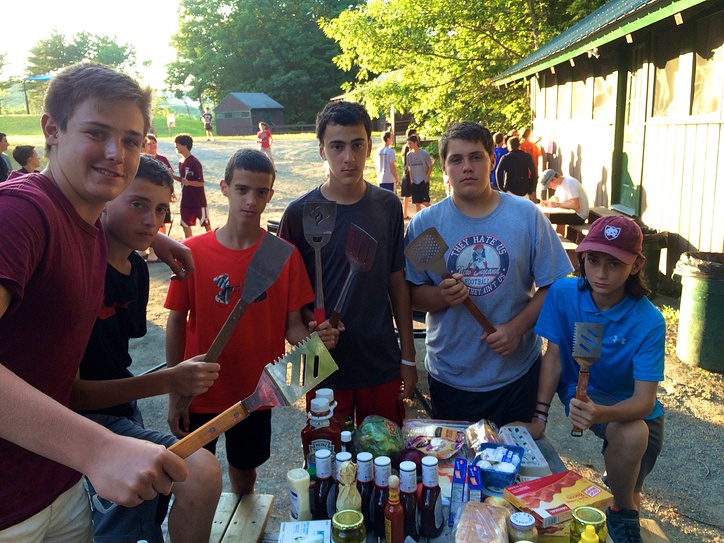 These guys take their grilling seriously

Tonight I hosted a big special event up on Senior Hill. After weeks of learning and practicing how to grill, tonight was the annual Iron Chef competition. For one hour groups of our 13, 14 and 15-year old boys worked together to strategize, plan a menu, and come up with the best tasting hamburgers that they could create. While presented with dozens and dozens of ingredients to choose from, each team could only use a maximum of 6. The Teams were judged on hygiene, presentation, creativity, team cohesion, and most importantly, taste. Of course, “Celebrity” judges were announced at the start of each event. 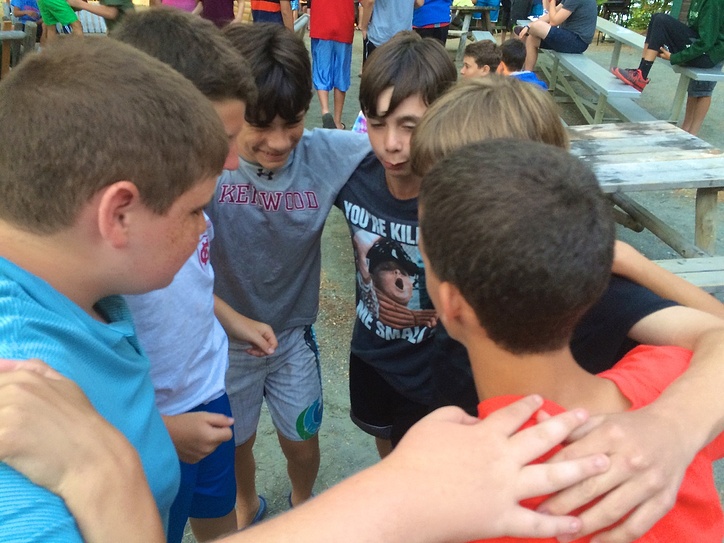 Like so many activities and events here, our campers experienced this as a fantastically fun thing to participate in, and a chance to potentially gain some notoriety for having succeeded in a competition. What I witnessed was yet another chance to unknowingly develop their 21st century skills. The groups had to test all sorts of important non-cognitive skills, from collaborating on a plan to figuring out whose lead to follow to adapting as they faced inevitable ups and downs (like when one group found that it had added too much liquid to their ground beef, and had to figure out in under a minute how to bind it together better). 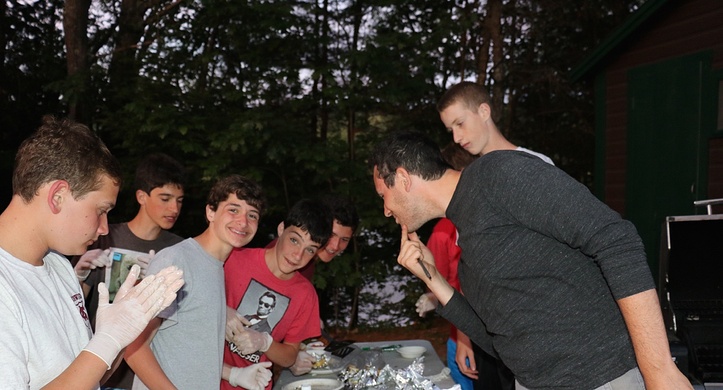 All eight teams worked incredibly hard and produced some very interesting, creative, and often tasty creations. Steve, Chevy and Chirs, our “celebrity judges” hammed it up during the tasting portion of the night, and when they announced the winners. Chevy and Steve were considered very important judges, since Steve participated in this tournament as a camper, and Chevy actually won it. Twice. As he told the group “I still have both of MY golden spatulas at home”. Whether cooking, eating or in the audience, everyone had a really good time tonight at this year’s Kenwood Iron Chef. 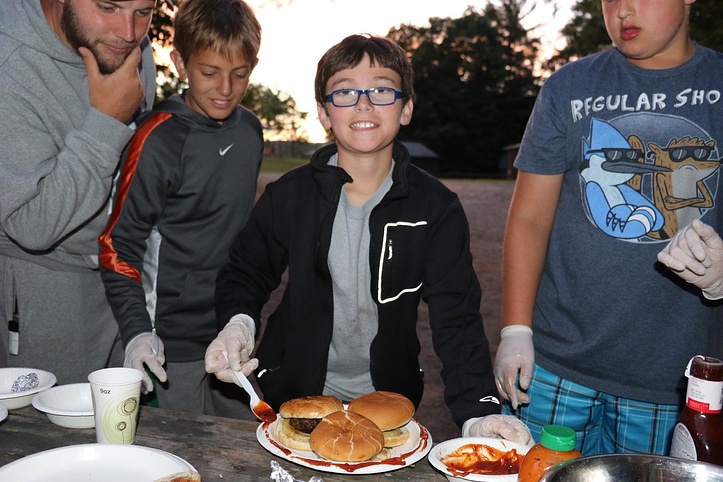 Evergreen’s Iron Chef will be later in the summer, and will involve a different set of ingredients. Stay tuned! 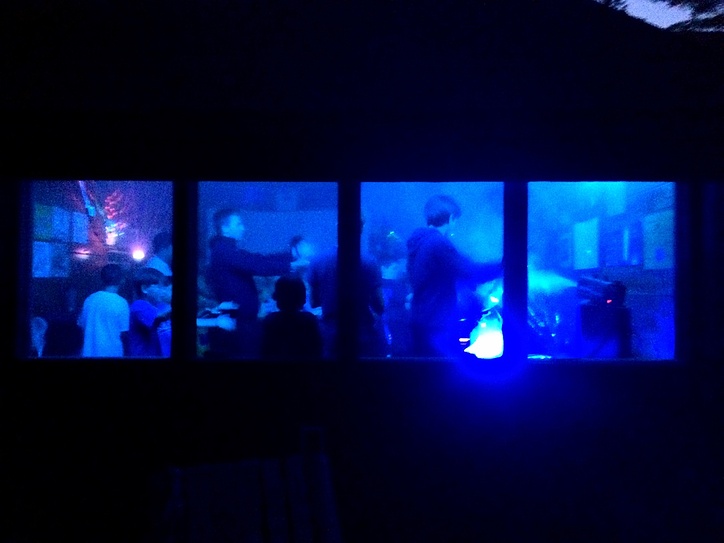 The final event of the night was a dance party at the Freshmen boys’ bunks. The junior counselors in bunks 4 & 5 had decided that it was time to have a special event in their living room. They borrowed my laser display, portable disco ball, smoke machine, some speakers, and 100 or so glow sticks. When the campers returned from Hobby Night they were greeted to some fabulous dance party tunes and an amazing light show. We danced, jumped and sang at the top of our lungs to “Cotton Eye Joe”, “the Chicken Dance” and House of Pain’s “Jump Around”, and then happily headed off to bed.

Yet again, I think this overnight camp of ours packed about as much fun, friendship and learning into a day is was humanly possible!