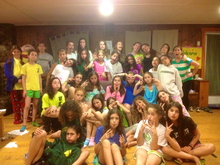 When I was a K&E camper one of my favorite times was when it rained. It always seemed to be a great opportunity for hanging out and making stronger friendships. It was on rainy days that I learned to play card games like Rummy and Uno, and board games like Risk and Backgammon. It’s when my people introduced each other to new bands that we had never heard before, and when counselors like Scott taught me to play guitar. As part of being independent for the first time campers very quickly learn really creative ways to occupy their time, especially when activities are  put on hold because of inclement weather. Today was one of those days.

For a very brief time we had some lightning overhead, so to be safe everyone was asked to remain in their bunks. One Kenwood freshmen told his counselor that he was a bit nervous about the weather outside. Sensing an opportunity to forge a stronger relationship with his camper, the counselor asked him if he would feel better and safer building a fort. Very enthusiastically the camper said yes. Quickly the entire bunk was involved constructing a dwelling of blankets, pillows and sheets that spanned a number of bunk beds. Everyone in the cabin “moved” inside their new fort, and suddenly any anxiety about the weather outside dissolved.

While this strikes me as wonderful example of quality counseloring and campers getting involved in solving their own problems, what really amazed me is how quickly word of the fort building spread around Camp. Though not every bunk decided to do the same thing (as so many others found their own fun and creative ways to pass the time) MANY took a cue from our Freshmen and constructed their own. Even some of our 12-year olds built, in their own words, “super elaborate super cool” structures. Our campers’ ability to turn any situation into a memorable one never ceases to amaze me.

Thankfully, for most of the day we were able to have regular activities. There were lacrosse, baseball, basketball, soccer, and volleyball periods, and campers continued making incredible, creative projects in all of our art departments. For much of the afternoon campers were in the theater tent working on their musical, and many, many bands were jamming in the music building.

Tonight Evergreen had a hysterically fun team-building event called Polaroid Scavenger Hunt. Campers were divided into small teams and given a digital camera. Then each team received a long list of places around Camp, and types of photos that the group needed to take in order to receive points. At each location the entire group needed to strike a pose, form a word, do something silly, or complete some sort of task while capturing it on film. There was tons of laughter and bonding as the girls ran around the campus coming up with the most creative images that they could!

In Kenwood we gathered all of the boys in the Dining Hall to watch the sports classic “Miracle”.  Those who had seen it before mouthed along with every word, and many seeing it for the first time told me afterwards “that was the greatest movie I’ve ever seen!” The dining hall shook with excitement as they cheered at the top of their lungs for all of the great moments of the film.

As everyone returned to the bunks I grabbed my guitar and headed out to sing some songs. All day I had been thinking about the Beatles, so as I sang in Evergreen lodge living rooms and Kenwood bunks I led sing-a-longs of “In My Life”, “Blackbird”, “Mother Nature’s Son”, “I Will”, “Yesterday” and more. What a lovely end to a lovely day!