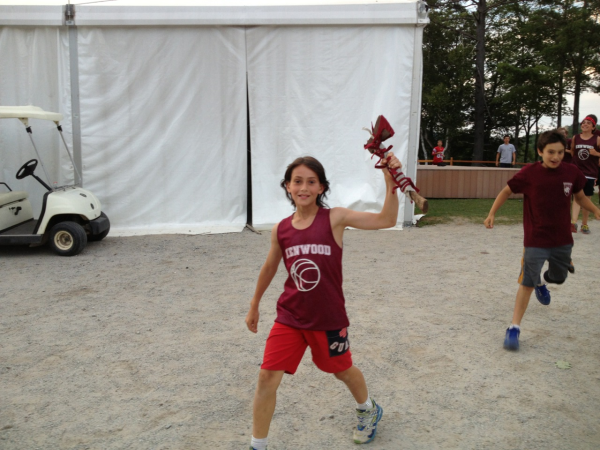 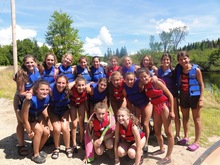 How can I even begin to describe the awesomeness of what took place this evening?

After 3 magical days on the road with Kenwood’s Hut 6 on our trip to Montreal we returned just before dinner time. The Evergreen 2nd Years also got back from their multi-day white water canoeing expedition, and both groups had amazing times. I will have videos from both trips up on our Youtube channel tomorrow. 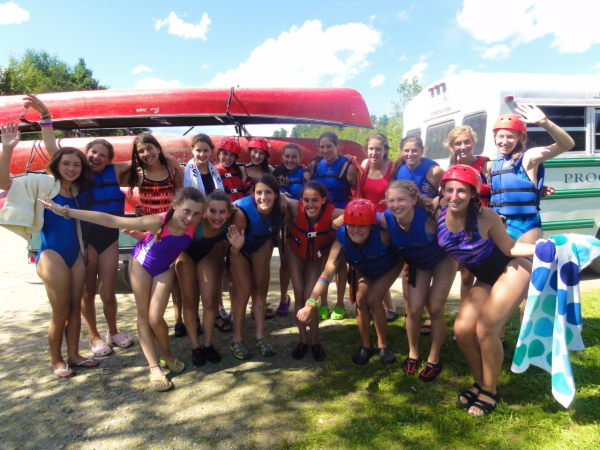 Both camps had all manner of interesting evening activities planned. Kenwood was set to have Plaque & Skit night, and Evergreen was going to have a Junior Camp Campfire.  Neither of those events took place, because secretly we had planned for Color War to break out tonight! Or, to be more precise, Phyllis and Jacki had devised an incredibly complicated, adrenaline-filled set of events to start Color War for both camps.

Throughout the day we were visited by police. In the middle of breakfast an officer arrived, asking for Scott. Doing their best to have a private conversation that every child would witness, they stood in the assembly area. The ruse was that some of our international counselors had improper visa documentation and that they might need to return home. Playing his part well, Scott seemed visibly concerned and did his best to loudly come to their defense. Additional visits happened throughout the day, and throughout campus there was buzz that some counselors might have to leave.

Around dinner time our chief of police (who is wonderful man who really loves K&E) arrived to “detain” 3 of our staff. He presented us with arrest warrants that Mia had actually created. They looked so real that during Free Play with great dismay we displayed them to any curious counselor. As the three were being taken away one of the counselors “escaped”, and ran across campus and into the woods. The police pretended to call in a helicopter to catch the fugitive (we had actually hired the helicopter), and a search ensued. After almost 8 tension-filled minutes on the run it landed on our upper sports fields and the two head coaches of our Boys’ Camp Color War jumped out. The crowd went wild, though our girls thought that this spectacle was only for the boys. Minutes later the ‘copter landed again, though this time in the Hollow, and the coaches for our Girls’ Color War jumped out. Pandemonium swept all over Camps Kenwood & Evergreen! Would you like to see the video that I put together this evening? Great work on the breakout Phyllis and Jacki!!

For the next 4 & 5 days our girls & boys will be on teams (Green & Gold for girls; Maroon & Grey for boys), playing every sport that we offer.  All four teams will also be involved in a treasure hunt, a spelling bee, an all-team relay race, a rope burning competition, and an organized debate. Everything will culminate with an event called Song & Cheer on the final day of each camp’s big event.  This will be a time of great spirit, great camaraderie, and above all else, great sportsmanship.  We can’t wait for tomorrow’s events to begin for both camps! 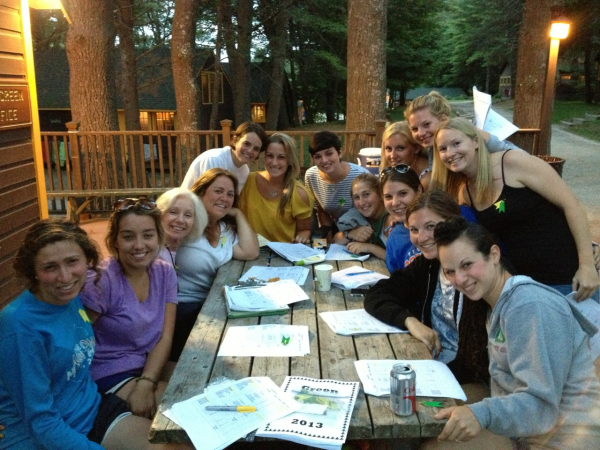 Our Evergreen Color War Judges at their first meeting

After a quick meeting Kenwood had its opening Color War event called “Find The Hatchet”.  The symbol of Kenwood’s Color War is an antique wooden hatchet wrapped in maroon and grey felt, and Head Counselor David hid it somewhere on campus. It took just under 2 minutes for a Kenwood Junior from NJ to find it (this year David decided to hide the hatchet under the new bridge to Kenwood’s Senior Hill).  Just after breakfast tomorrow Evergreen will have it’s own opening event called “Hunt The Colors”.  Deena will hide a half green and half gold flag somewhere on campus, and both teams race around trying to find it first.

Color War is one of the most powerful times of the summer. Over the next few days our campers will take part in an amazing series of events that will ask them to use all of the 21st century skills that they have learned this summer. They will find strength and inner resources that they didn’t know that they had as they will discover new ways to collaborate with their teammates and coaches. They will work harder than they ever have before, and be better prepared for the inevitable triumphs and setbacks than they were at the start of this summer. All over campus there is such excitement for the start of Color War activities tomorrow!