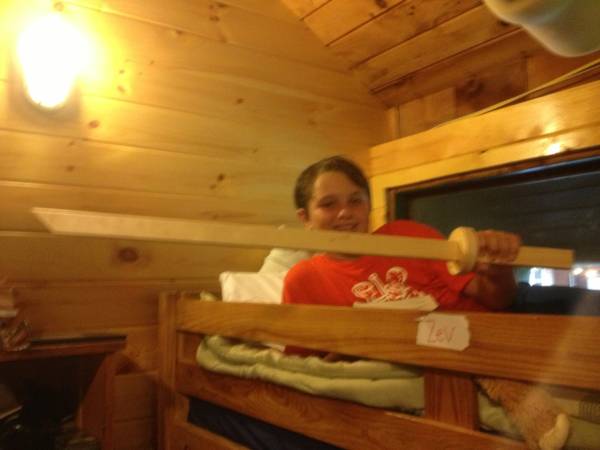 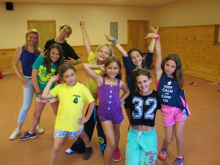 For many of us here music and Camp are deeply connected. Most of us eschew wrist watches in favor of marking the milestones of the day with bugel calls and Assembly music. When I was a camper one of my favorite aspects of each summer was living with new bunkmates who had different musical taste than I did. On rainy days when we were hanging out in the bunk we would take turns playing different songs for each other. I also have vivid memories of my counselors (including Scott) playing classic albums by the great bands that I had never heard of, and instantly becoming a fan of whole new styles and genres. It’s part of the learning that takes place here every summer.

So when I woke up this morning I felt like sharing some great music with the community. As the campers and counselors made their way to morning assembly I played the full medley from the B-side of the Beatles’ album Abbey Road. Many of the kids weren’t familiar with it, but they bopped along as they walked. But a healthy percentage of the campers ran up to me and exclaimed “I know this album!” Well done, parents. Well done.

On the way to dinner, in honor of Jerry Garcia Week I played my all-time favorite “Chinacat Sunflower” from the Grateful Dead’s fabled 1972/08/27 concert. Again, a wonderful portion of the kids made a comment about what they were hearing. For the next couple days we’ll be sampling classics from the many bands that Mr. Garcia played in. If you have any favorites that you’d like us to consider playing please feel free to leave a comment on this blog! I love that Jerry’s songs will be a part of Camp’s soundtrack this week.

The biggest event of the day was Evergreen’s participation in a multi-camp dance tournament.  For more than a week our four separate squads have been working with their counselors to learn and perfect their dance routines. They have been working so hard, and everyone has been supporting them in their attempts to get ready for today. During our weekly picnic lunch Phyllis got on the PA system and proudly announced that 2 of our teams had come in 2nd place, and 1 had come in first, so overall Evergreen had won the entire event! Girls and boys leapt into the air and started cheering, stomping their feet on the decks of the dining hall and theater. It was a fantastic moment of celebration. I have heard that there is some video footage from today’s event, and when I have possession of it I will of course share it both here and on our youtube channel.

While there were many groups out of Camp today we still had some fantastic activities. In Ceramics I watched two Junior girls spend almost a half hour painted minute details on the cases that they had made. In the wood shop a camper made serious progress on the medievil-style helmet that has become his summer project. I spent much of the morning at the Ropes Course, watching the Evergreen Freshmen & Sophomores enjoy the Pirate’s Net, the Giant’s Ladder, and the Zip Line. It’s incredible to see how comfortable so many of our campers have become taking healthy risks at the Ropes Course. I also love how after 5 weeks of living in this community their default is now to demonstrably support their friends as they take these risks.

Our Evergreen Inters had a blast today at Mt. Biking. Feeling adventuresome they traveled a little farther than usual, and made it all the way to the old train car that sits in the nearby village of Potter Place! 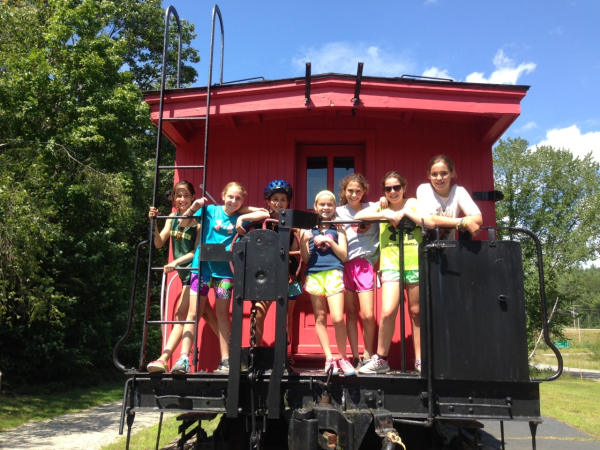 Lots of campers were using every available space today to practice for Saturday’s Hollowpallooza music festival. Currently we have 37 camper bands slated to perform, and more than a dozen counselor bands as well. One of the coolest things that I noticed is how many campers are playing instruments other than guitar or piano. Just today I saw people practicing on different types of saxophones, a clarinet, a cello, a trombone, and a flute! There are also so many girls rockin’ out on the drums. This is going to be an amazing event on Saturday. 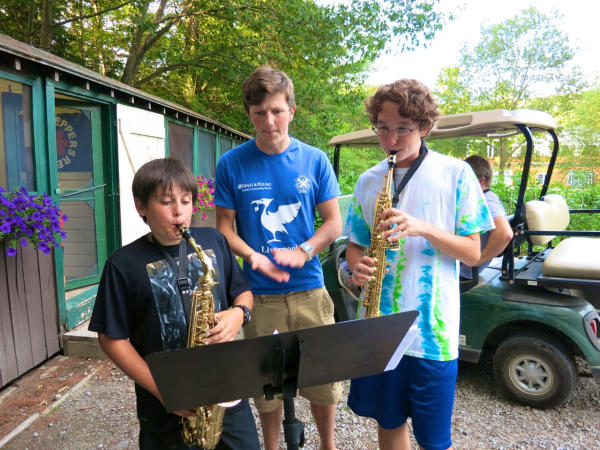 Our Kenwood 2nd Year Seniors returned from their white water canoeing trip with great stories to tell. Scott has been leading this expedition since I was a camper, and it’s a highlight of every summer for all involved. They also returned with a gopro camera filled with amazing footage from their trip down the Androscogin river. Here’s my favorite clip from their trip:

During 3rd period of the morning I had all of the Kenwood 1st Year Seniors to my house to continue a project that we had started earlier in the summer. In our last meeting one of the boys had expressed an interest in creating a mentoring program for next summer’s incoming 1st Year Seniors. His peers agreed, and today we set out to create an entire new tradition at Kenwood, with the twin goals of helping make Senior Hill’s future members feel as welcome as possible — and strengthening the bonds between these two groups. I was so proud of the young man who crafted this concept, and for the entire group who clearly want to be good leaders and role models to their younger camp brothers. 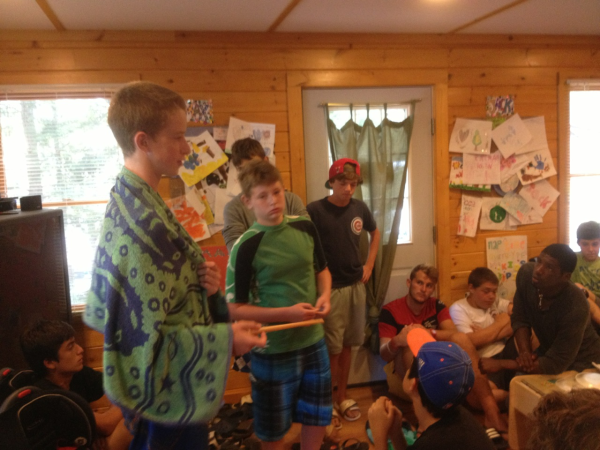 Towards the end of the day the sky got a cloudy, and some rain fell. Actually, a lot of rain fell. At Camp most campers shrugged it off and kept playing outside. Kenwood did have two groups out on overnights, and we didn’t want them to spend their evening sleeping in the cold rain, so we sent our buses to pick them up. When the Sophomore boys returned from their canoe trip a group of them said to me “that was the best trip ever! We wish it hadn’t rained but…whatever“. That’s exactly the sort of heartiness we hope that they learn here! A few minutes later I stumbled upon their counselors, who looked soaked head-to-toe. One of them was even wearing a set of trash bags as clothing since everything he had was soaked through. 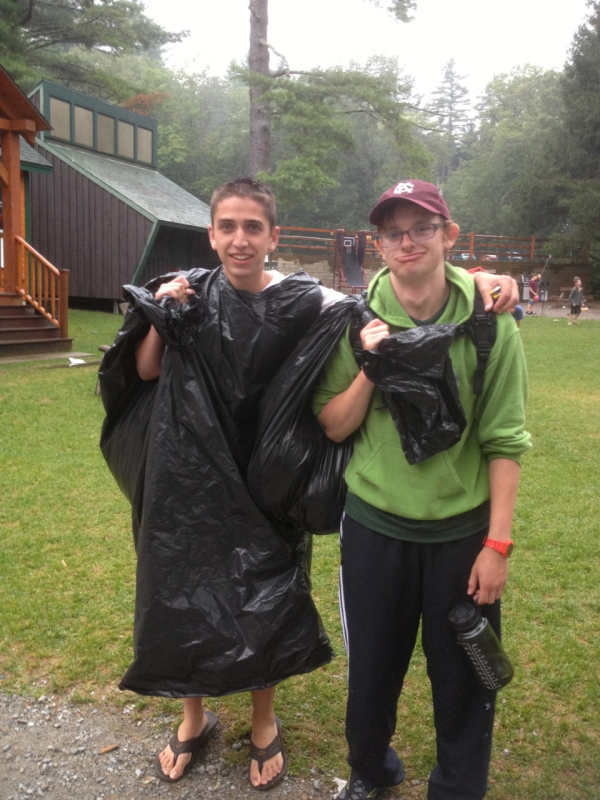 As the rain fell I spent some time in a Kenwood Inter bunk that I had once lived in (so had my father). I asked the boys if they had discovered the cool audio quirk about their bunk when it rained. They clearly had not, so I explained that if they sat quietly the sounds of the droplets falling on the roof would be audible, and that nature would give them a really amazing, relaxing listening experience. We all sat together in the quiet for about 15 minutes and enjoyed the almost meditative characterstic of the sound.

As I sit in my own Camp house tonight I am enjoying the sounds of this light rain falling while most of the campus is fast asleep. Camp is wonderful for it’s many loud, exciting, spirit-filled sounds, and yet it is also incredible for its subtler, more pensive moments of quiet. There are many, many great songs in Camp’s soundtrack this week.