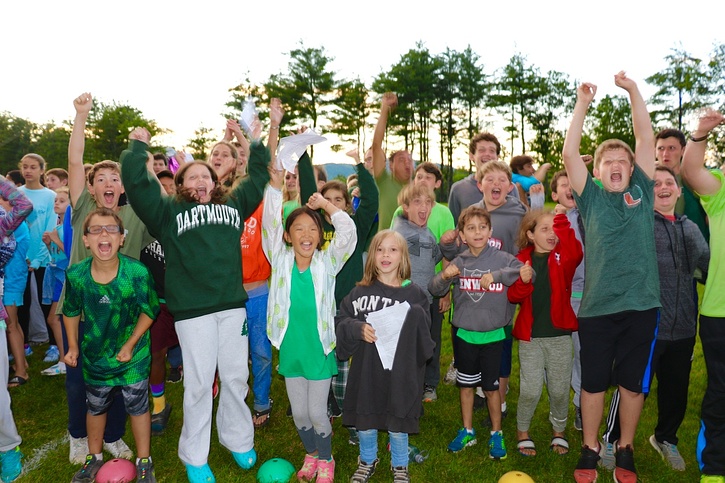 Big Weekend: One of Our Summer Camp’s Favorite Annual Events

Last night, we did our typical Friday night rituals and traditions. We had our Friday night service, then the whole camp gathered in the tent to watch the weekly wrap up video and two movies made by campers in our film department. Then I surprised the kids by saying that I had one more thing to show… 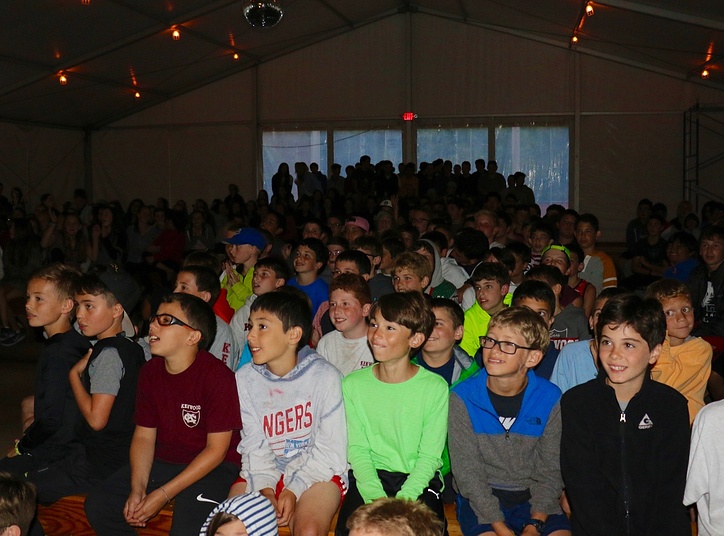 As soon as I hit play the screaming began, since the video signaled the beginning of a break out which meant it was the start of Big Weekend, one of our summer camp’s favorite annual events!

So what exactly IS Big Weekend? In some ways it’s like a miniature version of Color War, with some very important differences. During Big Weekend we divide the camp community up into 6 teams, all based on a theme. This year’s theme is The Oscars, with teams based on some of our favorite animated films. The teams are The Incredibles, Shrek, Up!, Despicable Me, Toy Story and Moana. And over the course of 2 days campers will participate in some traditional, and some creative, sports activities. So at one point today there were boys and girls playing traditional sports like softball, basketball and volleyball, and then later in the day they were laughing it up during events called “Lineup Ball”, “Minefield”, and “Blindfolded Soccer” (don’t worry, we don’t have our kids running with blindfolds on!). The goal of Big Weekend is to bring our two brother-sister overnight camps together for some fun, low-key, age-appropriate play, and to help our boys and girls make quality friendships with the kids in the other camp. There’s a great deal of singing, cheering, and team spirit. And when they are playing our more creative games, it’s a chance for them to work yet again on the 21st Century Skills that we have been focusing on all summer long (skills like collaboration, effective communication, leadership, and creative problem solving). This entire special event is organized by Jacki and Bob Mitchell, our super-creative athletic directors. Many thanks to them for all of the fun and excitement that they bring to our camp community each summer! 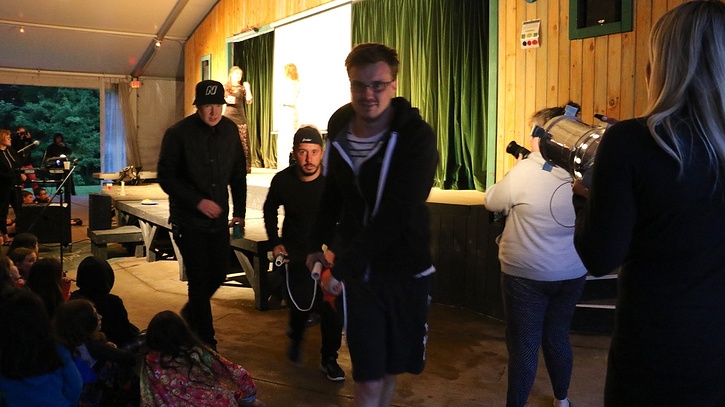 The movie that I played was put together by Holly, our fantastic Head of Filmmaking. It was a montage of classic movie moments, followed by a brief introduction for each team. The whole camp went crazy with excitement with each clip, especially when the coaches stepped out of the limosine that we had rented and onto the red carpet. While last year’s breakout was probably the most elaborate I’ve ever seen in terms of shear number of people involved, this was without a doubt the most complicated and theatrical. And the costumes that the coaches wore were really incredible, too! 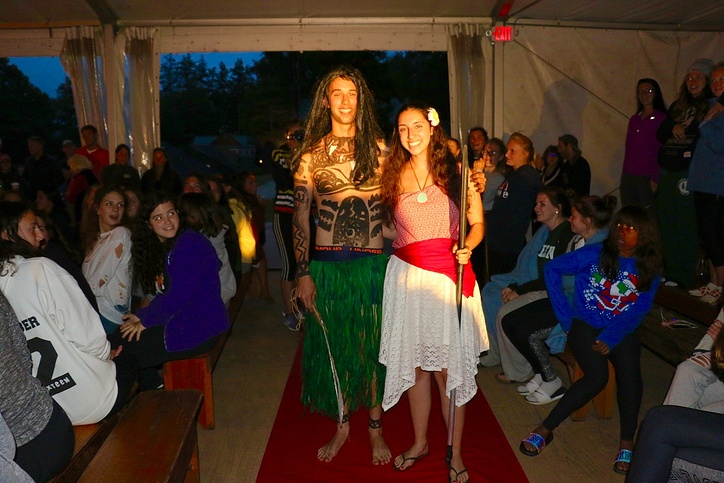 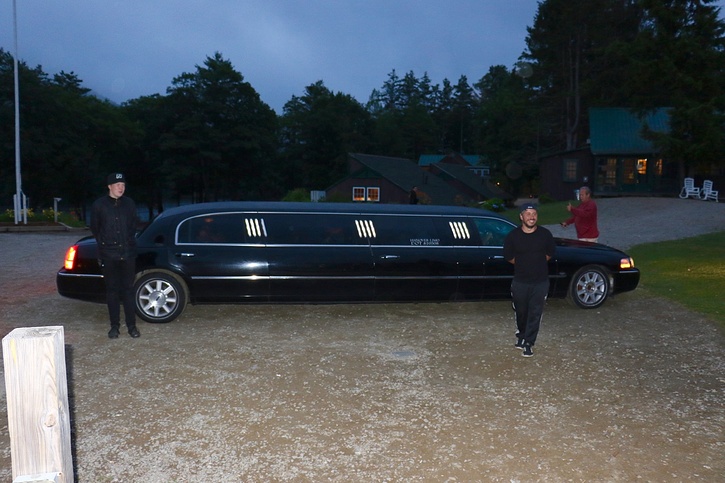 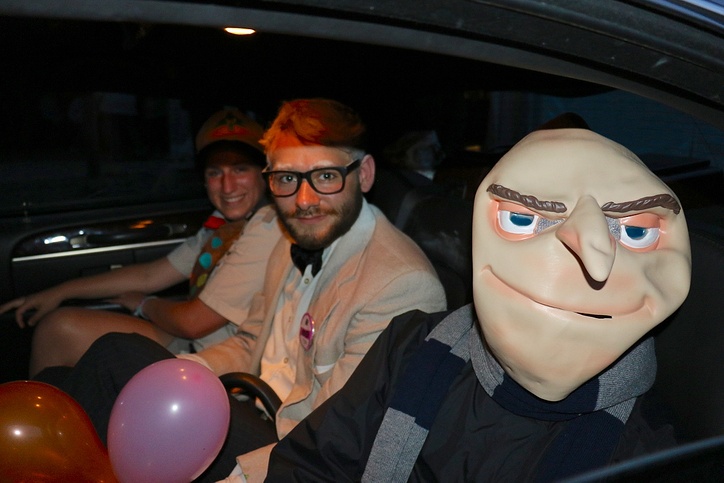 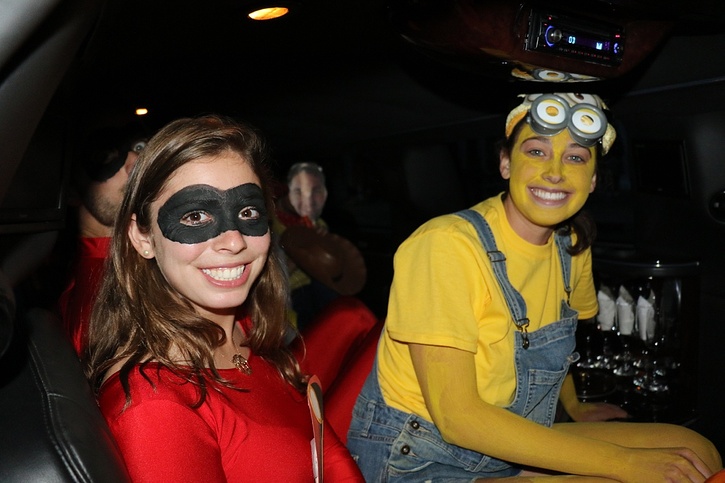 Special events like this really raise the level of camp spirit amongst our campers and staff. After the 12 coaches took the stage it took a full 10 minutes to get the entire community to end their cheering. It was such an incredible night of excitement for everyone! 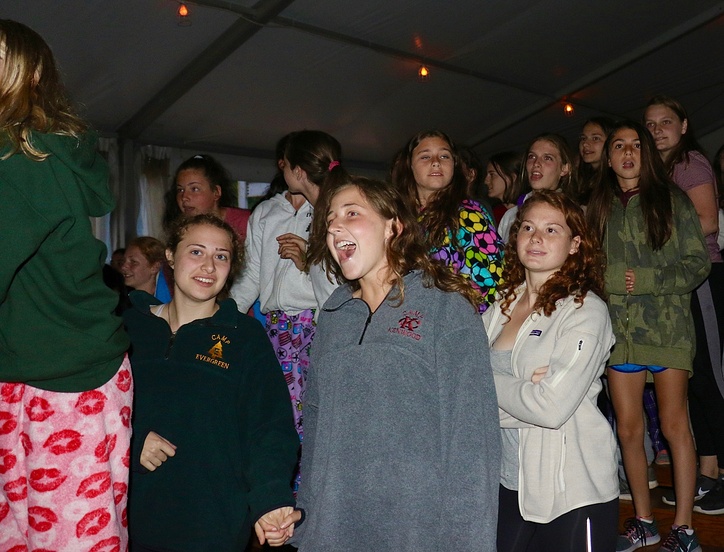 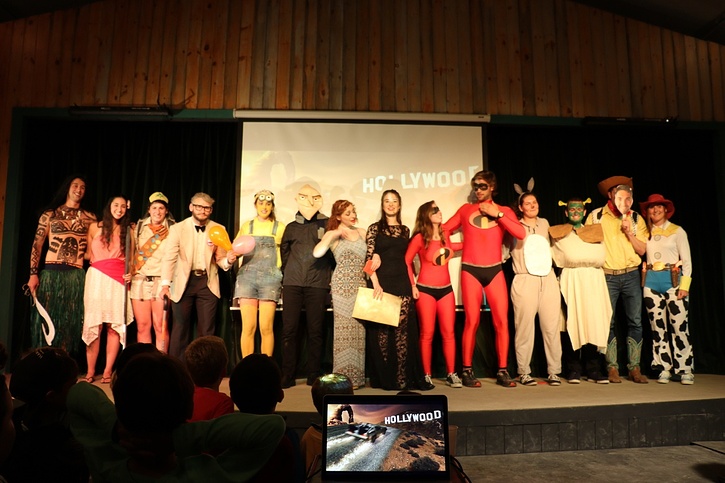 Last night on Facebook I posted a the photo below of what looked to be Woody and Amy from Toy Story. If you looked closely you could see that the person dressed up as Woody was holding a sign in front of his face. There was good reason for this.

Our longtime girls’ soccer coach Tom Shanks was picked to co-lead this team (alongside longtime friend and Evergreen waterfront counselor Amy Perfitt). But Tom wasn’t actually able to be with us for the breakout last night…because he was in England yesterday giving the Valedictorian Speech at his college graduation. So always looking for a creative solution to a problem, we made a Soccer Tom mask which his friend Sean Atkinson held in front of his face. Because they are the same height and body type I truly don’t think most of the kids had any idea that it really wasn’t Tom.

Ever dedicated to his kids and the camp community, Tom flew back last night, and with a few flight delays arrived on campus around 3:30am…and then up and ready to coach at 8am! Congratulations, Tom, both on your graduation and being honored by your class. 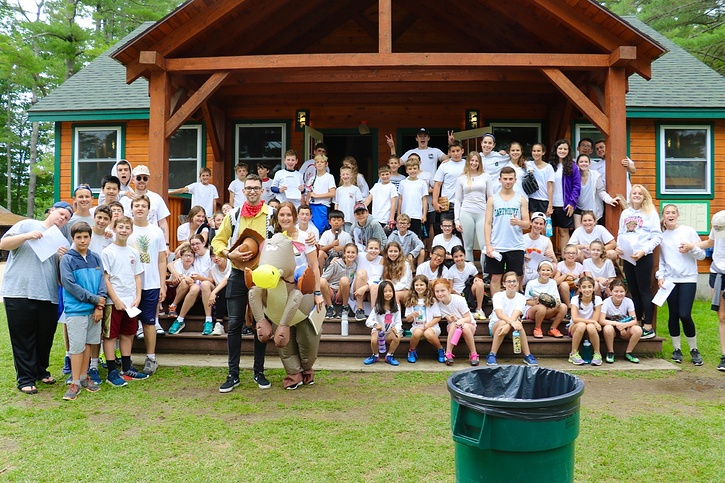 Somehow with all of the excitement of the breakout we got everyone back to the bunks and off to bed. The next morning everyone was wearing the shirt color assigned to their team and excited for Big Weekend games. For parents who wondered why the packing list required so many shirts of different colors here is one reason why! After a quick team meeting the campers and staff moved out to their first activities. 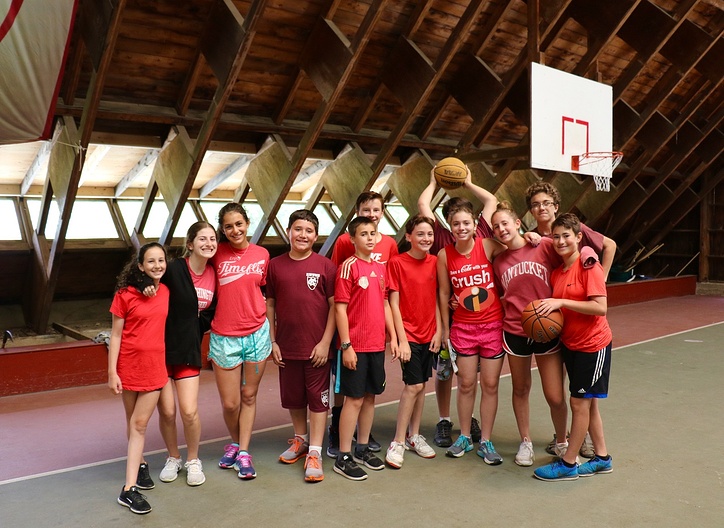 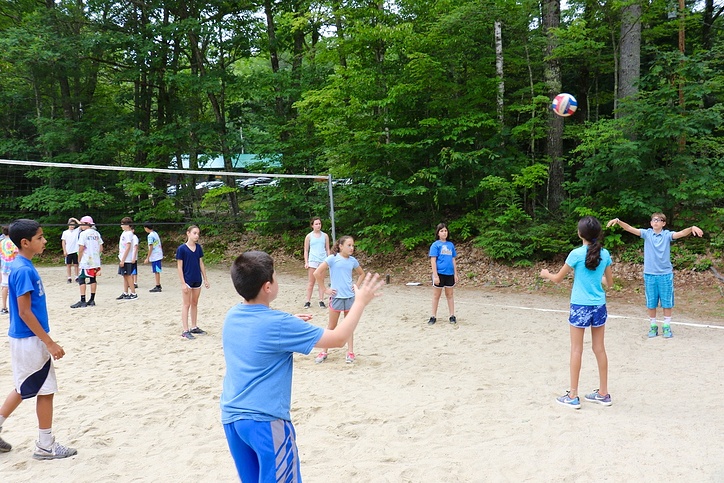 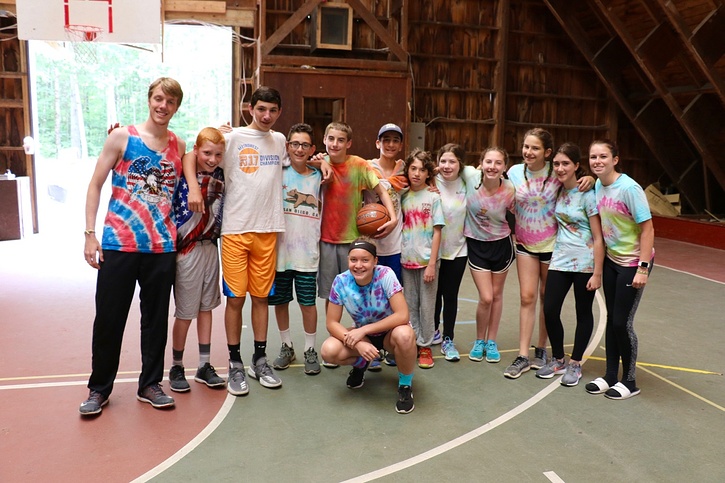 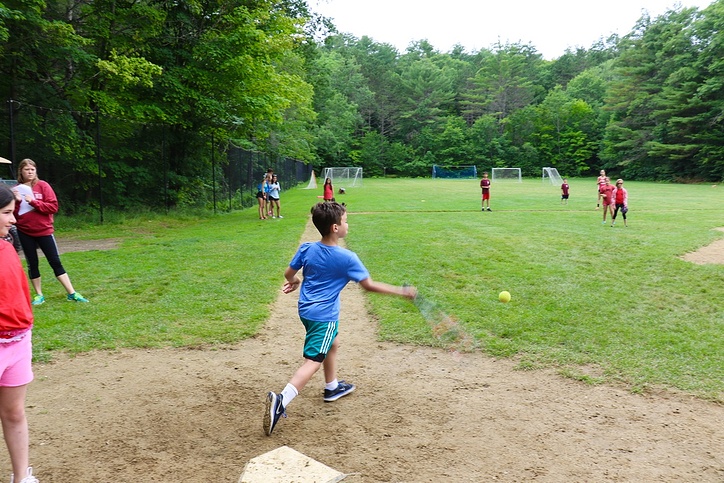 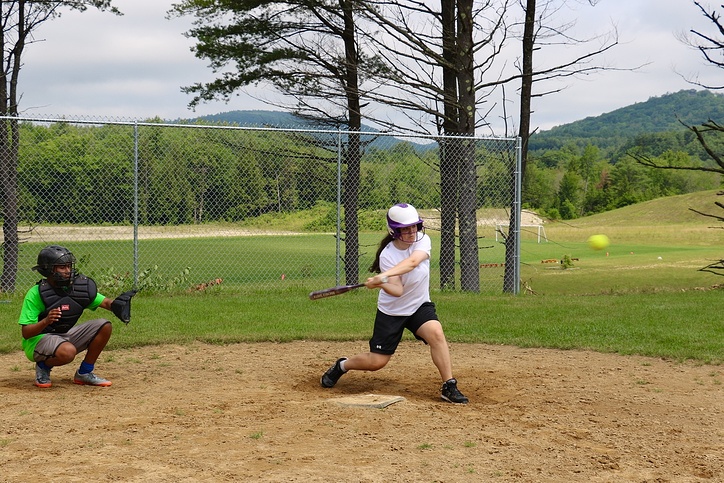 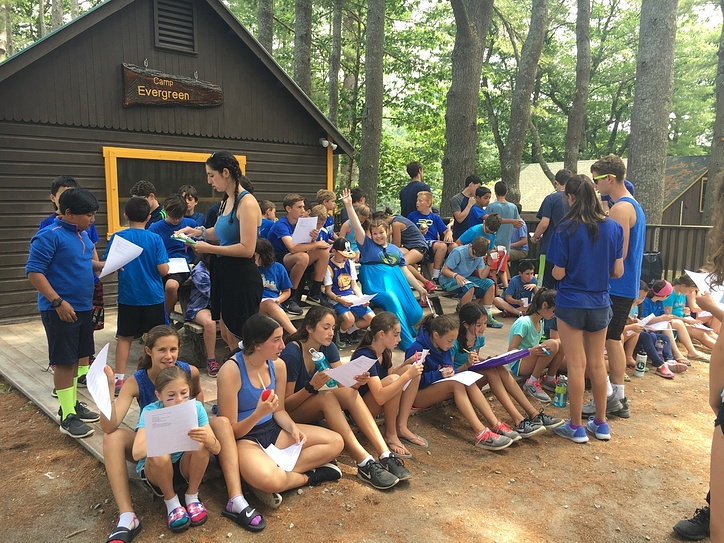 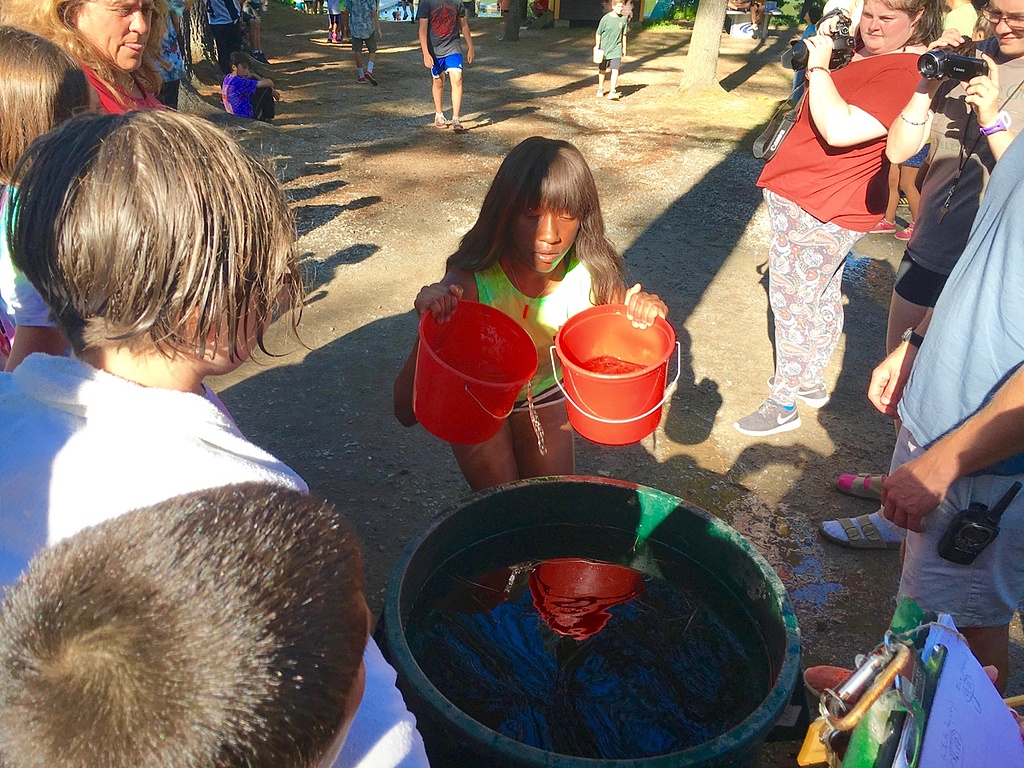 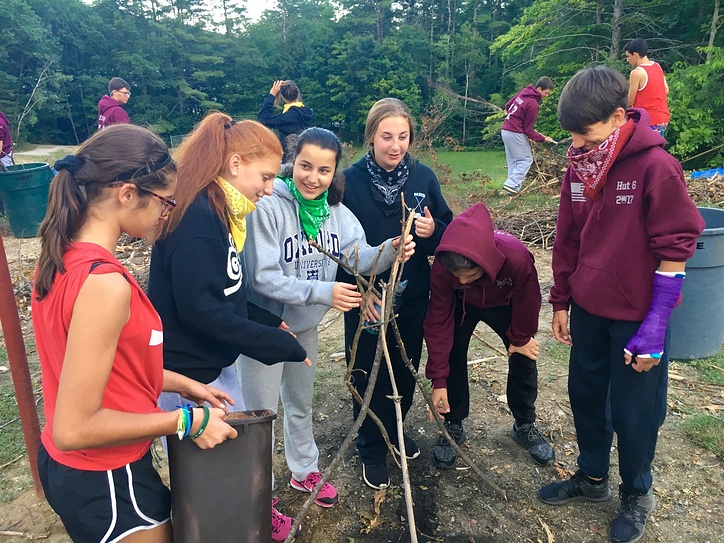 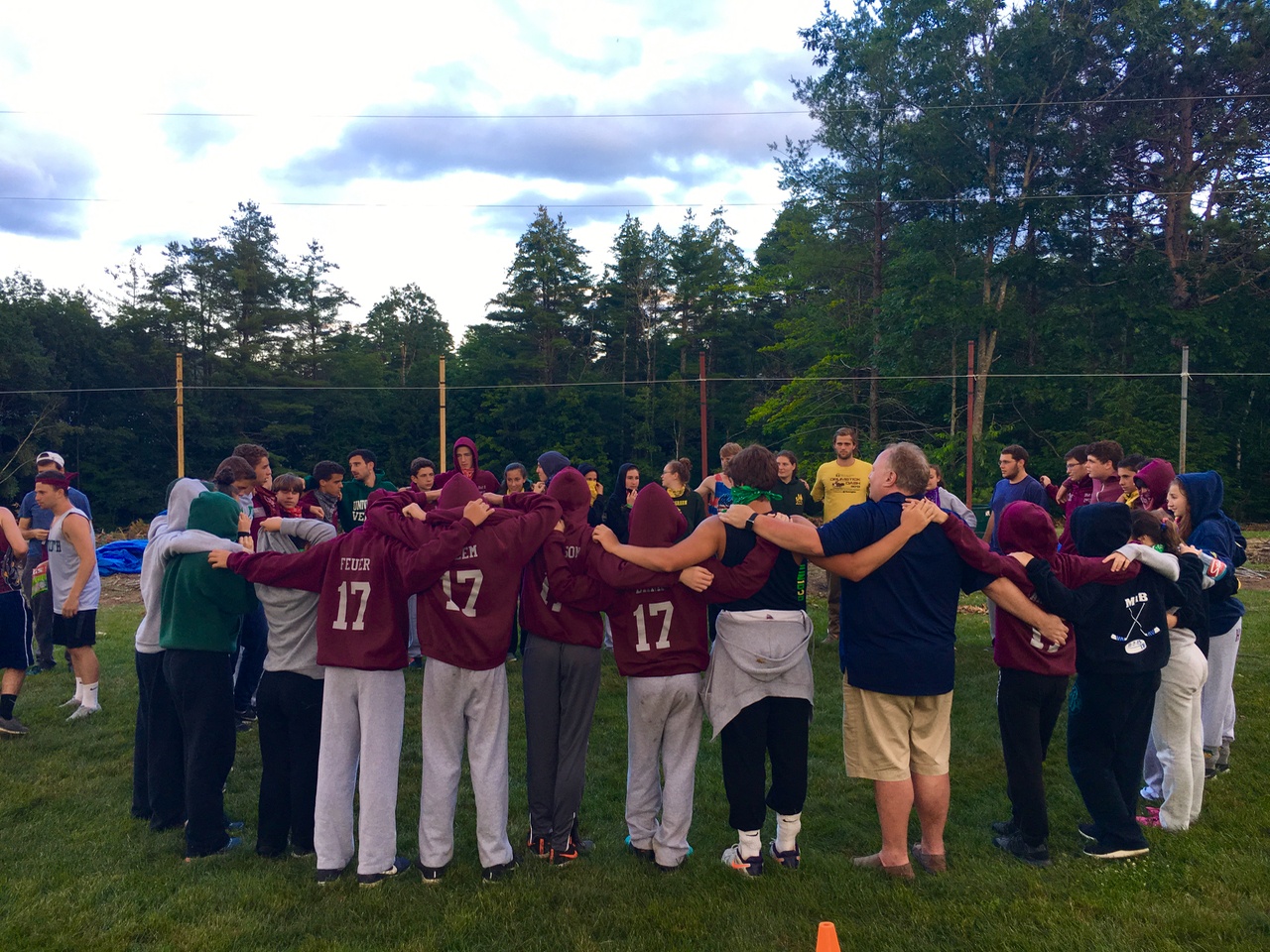 One of the best traditions at Big Weekend Rope Burning is how our campers get themselves psyched up each year. Rather than getting together with their teammates, they first gather with Scott in one large group. They wrap their arms around each other and take in the excitement of what is about to happen. For most of them this is something they have been waiting to do since the age of 8 or 9. Then our Hut 6 boys form a huddle and our Juniper girls do the same. They begin chanting the name of their cabin, and start leaping up and down in excitement. Eventually, both groups reach a fevered pitch, and then break to start the event. This ritual is all about them cherishing the many years that they have spent together, and savoring this moment. Watching it each year Deena and I become a bit wistful about when we and our camp friends had the honor of participating in this ritual so very long ago… 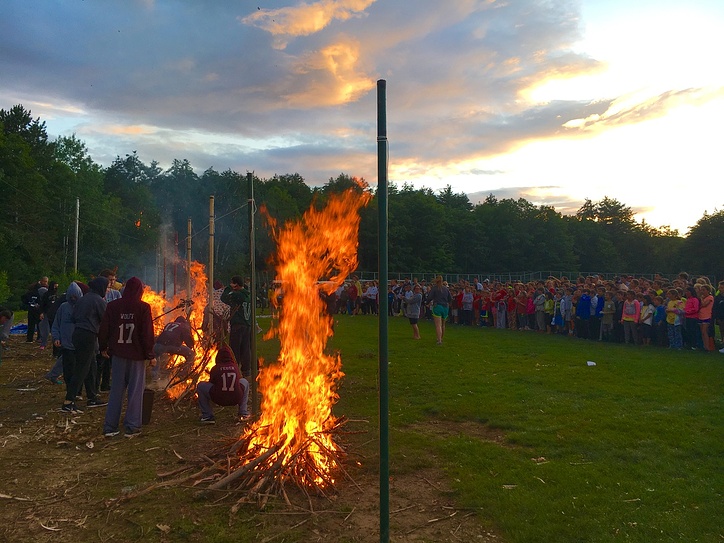 Once they had finished their psych up, Jacki brought the whole camp community together. She explained the rules of Rope Burning, and then we began the countdown. The whistle blew and the 6 teams sprang into action. Some teams got their fire lit quicky while others struggled to light their matches. One team’s fire became an inferno so fast that before most had noticed it was already licking the rope. In :45 seconds they had won, achieving the fastest recorded time since 1993 (and yes, we do keep track). But there were still 5 fires left to go. Some fires leapt into the air quickly, only to burn out and need more wood for fuel. Two others gained speed quickly and melted through their ropes. Then it was down to a final 3. The teams went back and forth and back again as the flames light up the evening sky and eventually all ropes . It was great stuff. 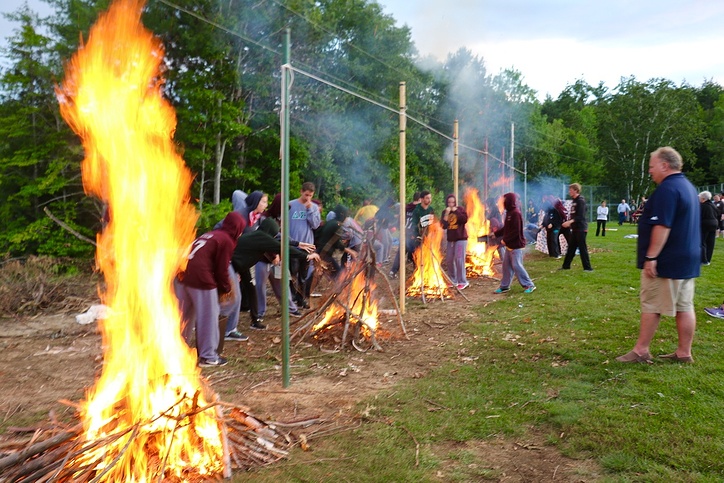 Campers from all six teams celebrated by jumping up and down and singing in support of their older teammates. What I love about our annual Big Weekend Rope Burning event is that after all of its team spirit and intensity, it immediately reverts back to what our camp community is all about. The participants on each team walked over to hug and congratulate each other on having completed this major rite of passage. Moments later the entire camp was holding hands, standing underneath a gorgeous red sky, singing Taps together. Watching our entire overnight camp community come together for a special event like this is one of my favorite moments of every summer.

Learn more about our summer camp