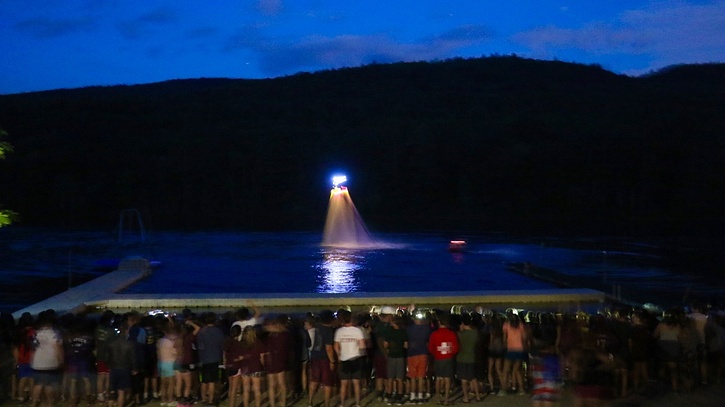 Another Unbelievable Color War Breakout At Our Summer Camp In NH!

As a summer camp we really like pushing the envelope with our special events, especially when it comes to Color War breakouts. We’re always on the lookout for new and creative ways to start our annual end-of-summer sports tournament. Phyllis has been planning this year’s break out for almost 2 years now and it did not disappoint. In fact, I think tonight rivaled the craziness and excitement of last year’s Megasaurus breakout.

Tonight, our boys were in the gym watching a movie and our girls were in the theater putting on their Plaque and Lip Sync event. Suddenly, there were enormous and explosive booms that went off, and immediately music blasted out of the massive PA speakers down at the Evergreen Waterfront. The campers and counselors took off running immediately, knowing that this had to be the start of Color War 2017!

As soon as they got there they noticed these beautiful glowing lights just beyond the docks. Mysteriously, the lights began to hover at the top of the water…and then began to rise high into the air. The entire Camp community went crazy as they realized it was a person in an LED covered suit that looked like Marvel’s Iron Man. The suit shot water out of its feet, which propelled it into the air! The man in the suit began to do twists, turns and flips all while his suit changed into the 4 colors of our Camp. It was absolutely incredible, and the kids could not have been more excited.

After a couple of minutes of this amazing show the lights suddenly went dark…and everyone on the beach got quiet. Then one of our waterski boats came from the other side of the lake. It was covered in maroon, grey, green and gold LED lights, and that caused the whole Camp to begin screaming and cheering even louder than before. Eventually it docked, and the four head coaches of our teams jumped out. As soon as they stepped off the docks they were mobbed by their hundreds of friends who could not have been more excited about the start of this favorite special event.

If you’d like to see a short video of our 2017 Color War Breakout please click on the link below:

Camps Kenwood and Evergreen is a 7 week brother-sister overnight camp in Wilmot, NH