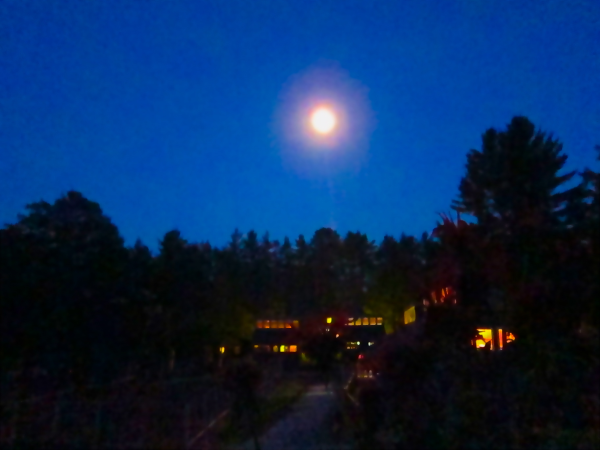 A Wonderful Day at Camp 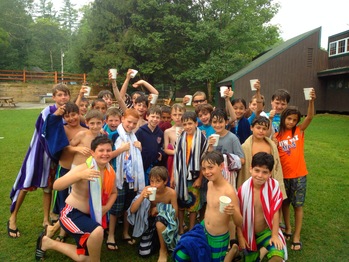 What a wonderful day at Camp, and a wonderful way to end week #3. At 7:00am, as I was walking to my office I bumped into almost 40 Kenwood campers on their way to their morning Polar Bear swim. With this heat wave there wasn’t much “polar” to their swim, as right now the lake is so warm that it feels like bath water! As a group they were led by Adventure Dave, who had them do jumping jacks, hold hangs, and then leap in the water together. You could actually hear their laughing all the way at my house. 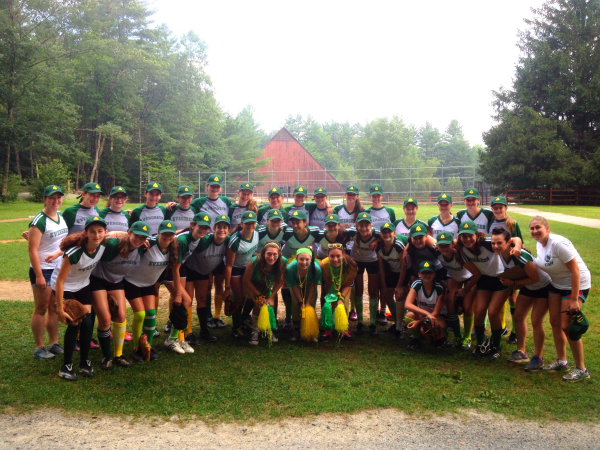 Just as the boys returned to their bunks I blew reveille call, and the two 2013 Evergreen Tri-State Softball Teams ran around campus in parallel lines, cheering and singing songs about their spirit. Kenwood & Evergreen campers came out of their bunks to celebrate our girls. As is our ritual, towards the end of the morning assembly Athletic Director Jacki introduced both teams to the whole community, and we wished them a very hearty good luck. 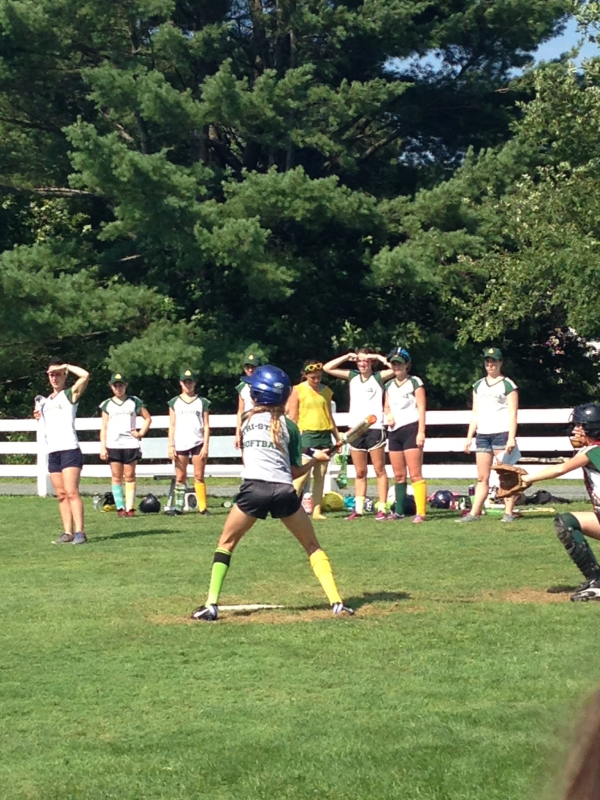 The heat was pretty intense today, but our girls were ready for it. With water bottles in hand and many, many coolers filled with ice and gatorade they played a total of 6 games against other girls’ camps from around NH. Evergreen team A lost their first game against a camp with an incredible pitcher. They found their stride in the second game and soundly defeated their opponents. They then went on to win their third game as well. Evergreen’s B team won their first game, but then lost their subsequent two matches. In the end, our A team came in 2nd place, and our B team came in 3rd. Our girls battle weary when they returned home, but the community was waiting for them at the Evergreen ballfield, ready to celebrate all that they had accomplished today. Acka-lacka-ching, girls!

In this heat the Evergreen Inters and Juniors were very excited to have a trip today to a waterpark. Just after breakfast they boarded our buses and then they spent the morning and afternoon cooling off on some very fun rides. They also spent some time playing and swimming at the beach, and a good time was very much had by all. 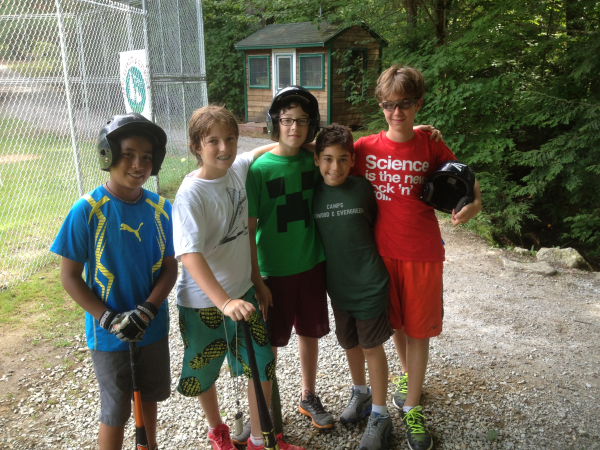 In Camp people seemed be enjoying the warm, sunny weather. I heard a lot of “hey, it isn’t raining and that’s fantastic!” Our kids are such troopers! I watched Evergreen Sophomores tube on the lake, and Kenwood Juniors go out on a mountain biking trip. I watched a number of Kenwood Freshmen go off the new zip line for the first time, and enjoyed seeing Evergreen Freshmen take lessons in basketball and lacrosse. There were also Junior boys fishing and in the batting cage, Freshmen girls at Gymnastics, and Sophomore boys shooting movies. It was quite a day! 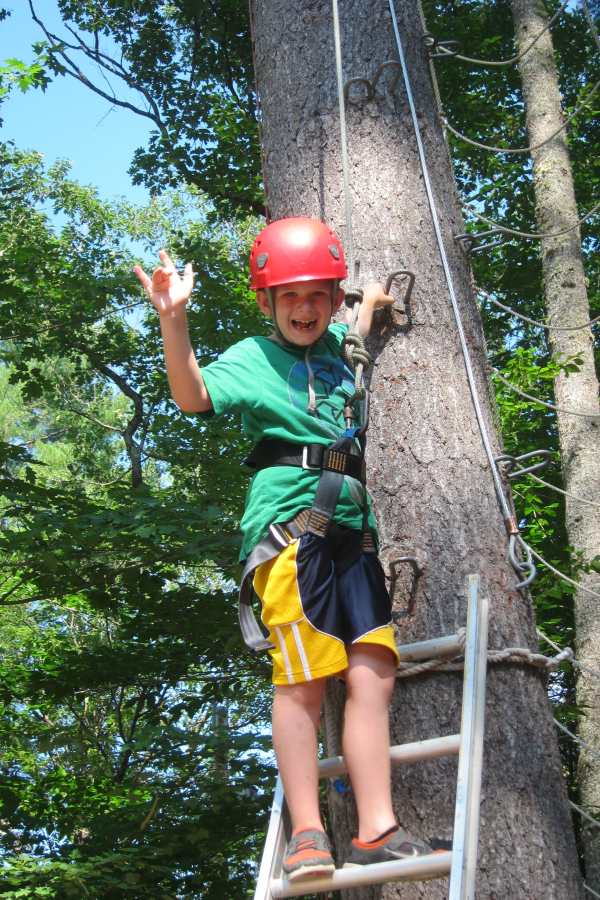 After dinner we had our weekly scheduled Brother-Sister visiting time, and then our Friday night services. I wrote this week’s sermon to help our community think about the importance of healthy risk taking and trying new things outside of your comfort zone. I read it to the campers in the tent, while Scott shared it with those at his gathering down by the Evergreen waterfront. It really seemed to resonate with the kids, and afterwards each group had thoughtful discussions about how to put these ideas into practice this coming week (and going forward).

When services had concluded our Sophomore Boys & Girls each put on their summer theatrical productions. Each play was the telling of a story concieved of by our campers, with additional music and choreography crafted by our drama team. Tonight’s actors were VERY funny, and the tent shooked with laughter during the plays. Everyone was so proud of our young actors!

As we drew the curtains in the theater our campers and counselors returned to their bunks to end yet another wonderful day at Camp. Thankfully the temperature dropped significantly, and after such an active day our campers seemed to fall asleep quickly. Looking to have one more great moment before calling it a day, I gathered all of the Kenwood Juniors together in a bunk to tell them a story. It was a camper in Bunk 10’s birthday, and he had asked me if I could do something special to mark the occasion. I chose to tell the group The John Levine Story. Kenwood & Evergreen don’t really have any ghost stories. It’s just not our thing here. But we do have this adventure story that was thought up by one of my counselors almost 30 years ago. I found it so compelling that I’ve been telling it ever since I becamse a counselor, and help the mythology around it grow I only tell it to Juniors. The birthday boy was quite excited to have this take place on his special day, and I loved having all of our Juniors together for this story I so love to tell. When I finished, after being silent for almost an hour, the unit of boys whooped and hollered. It was exactly the reaction that I had been hoping for.

So yet again the stars are out, and our campers are asleep. And yet again we say goodnight to a wonderful day at Camp, and a wonderful third week of this summer. We can’t wait to start week #4 tomorrow!