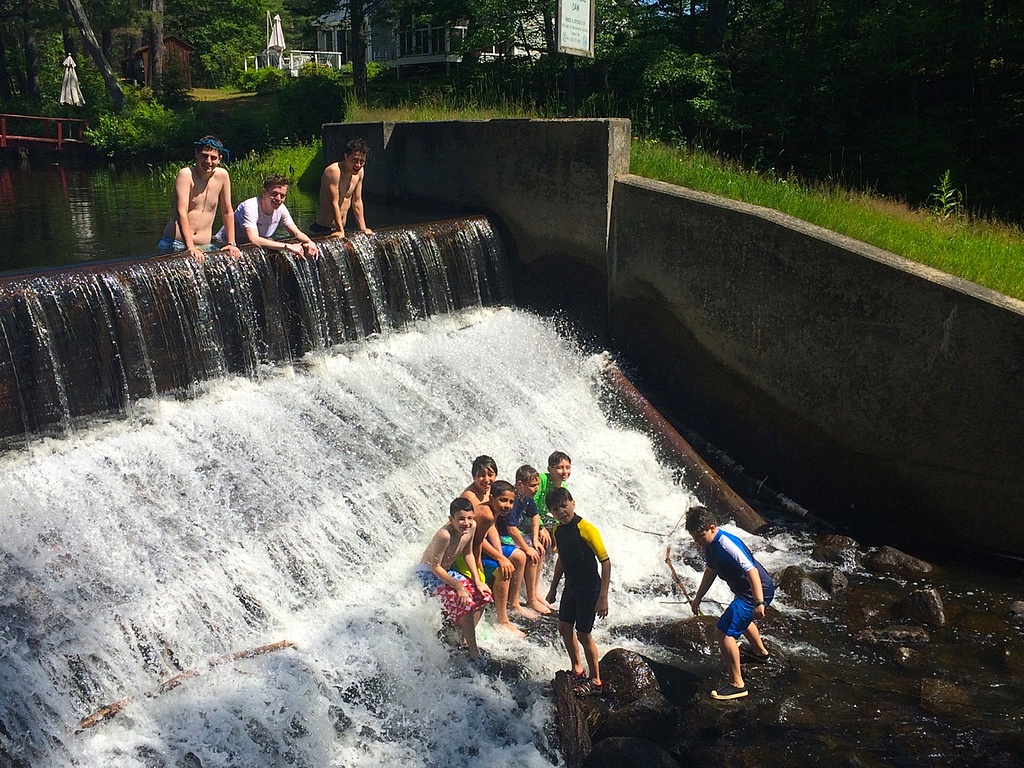 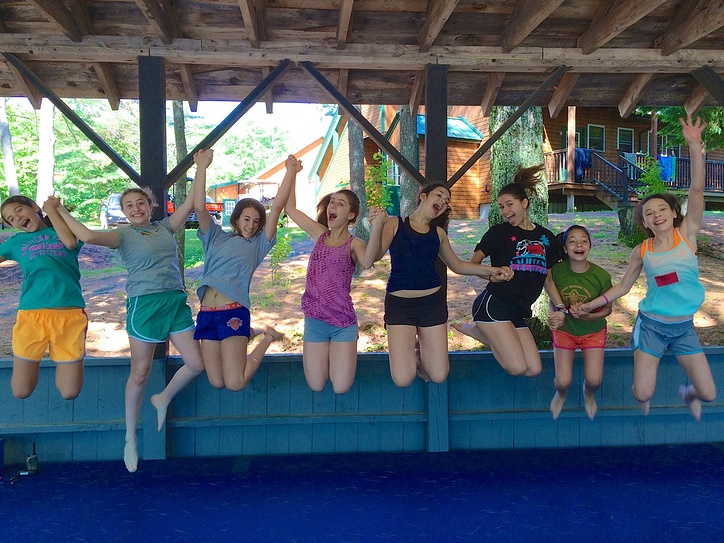 Today was a gorgeous day of sports, arts and adventures at camp. As we stood on the porch of the main office at 7am Scott, David, Phyllis and I were all celebrating how warm and beautiful it was. It really felt like summer had arrived. As the campers bounded out of their bunks on the way to breakfast you could see how happy they were, too. The hot sun and blue skies helped put a spring in everyone’s step. 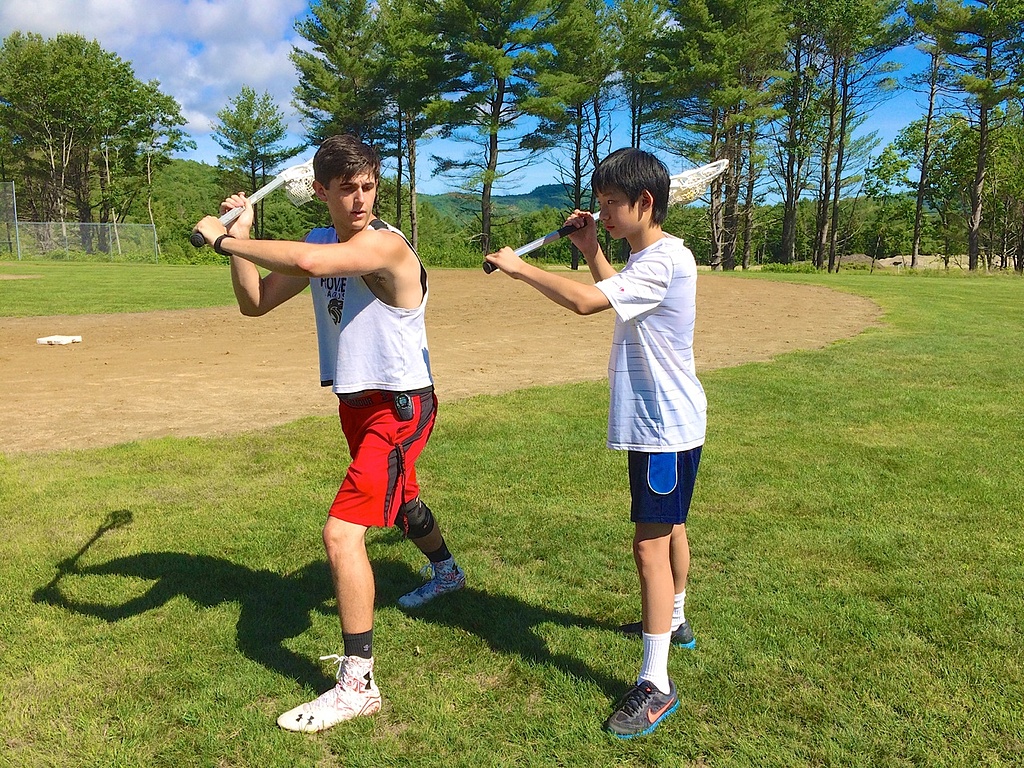 Throughout the morning I traveled around campus and saw campers having a blast at their activities. Lacrosse coach Brian was running a great clinic on the senior ball field with the Kenwood Juniors. While he was teaching lacrosse, our Evergreen 11’s lacrosse team was out at the first K&E sports tournament of 2015. Ably coached by Athletic Director Jacki Mitchell, they ended up bringing home an impressive second place showing. Congrats, girls! Back at Camp, basketball coach Erin Maldonado was teaching our Evergreen campers the proper mechanics of shooting the ball and finishing up her lessons with a celebratory dance party. 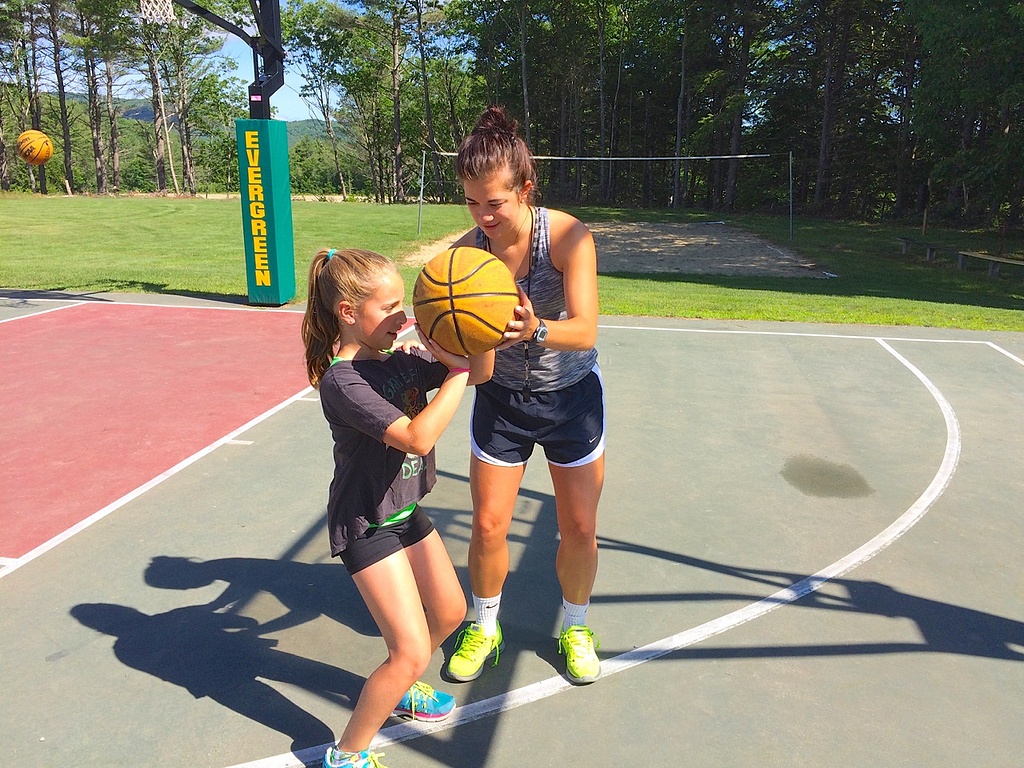 On the Junior tennis courts instructors Kass, Heidi and Joel were working with small groups of freshmen and sophomores on their ground strokes and volleys. At each sports activity the coaches and counselors were making it fun, but also making sure that each camper ende the period with improved skills. 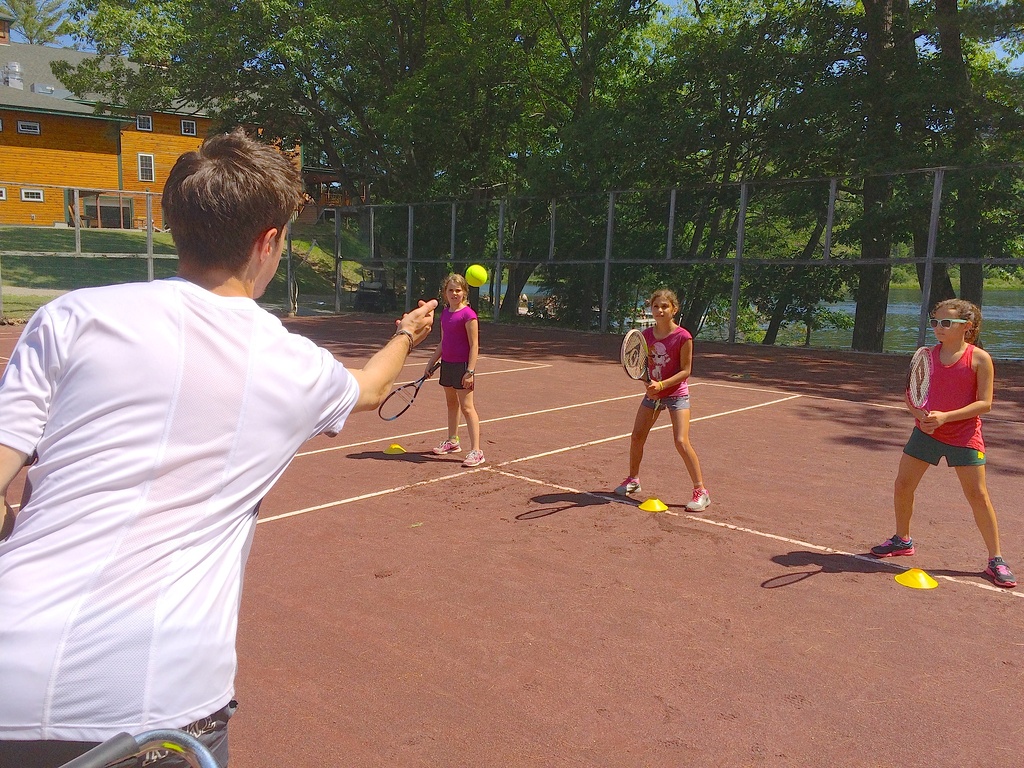 I spent quite a bit of time with our Inter girls, who were taking part in the best film making period I’ve ever seen. Our specialists Hannah Hafey and Kaitlin Smith were giving lessons designed to teach our campers how to storyboard their ideas, and how to use different shooting angles for dramatic effect. When I arrived at the film studio I was told by the girls “we’re learning to be…cin…cine…cinematographers!” They said it with such glee, and were clearly so happy to be learning such advanced movie making techniques. 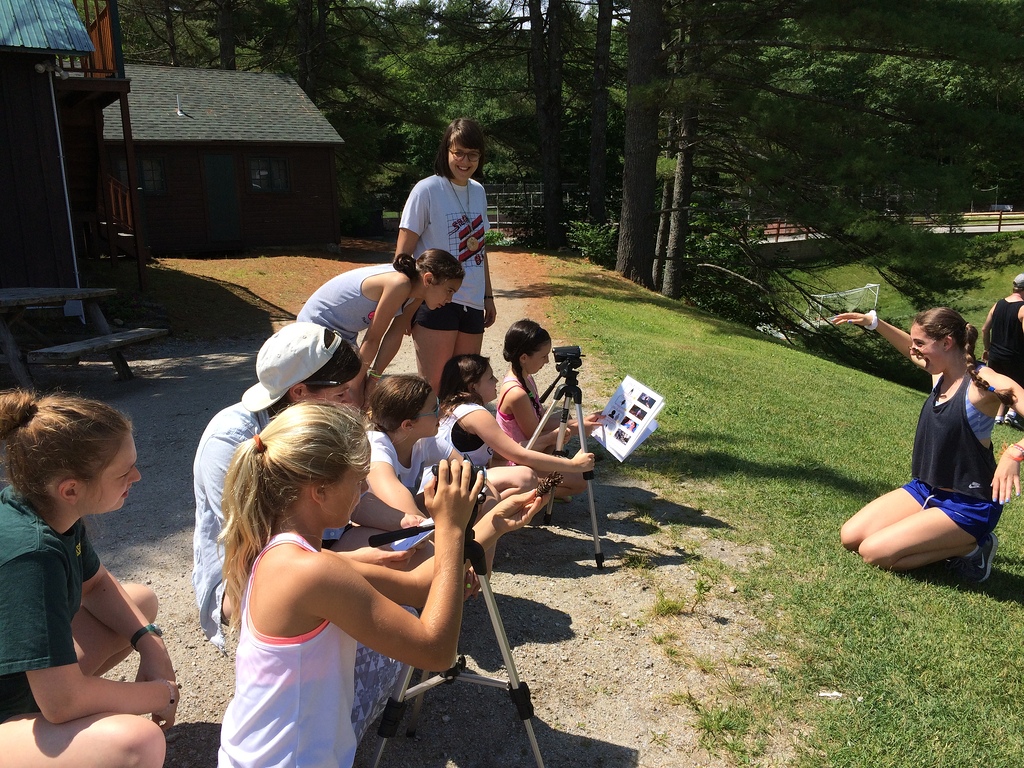 Later in the day I sat in on a Lego animation period in the film lab. Campers were learning how to link stop motion images so that they produced the appearance of movement when show in succession. They also tried out our green screen, which when combined with computer technology, allows the campers to place the Lego figures in any background that they can think of. Today was a really great day for creativity at camp! 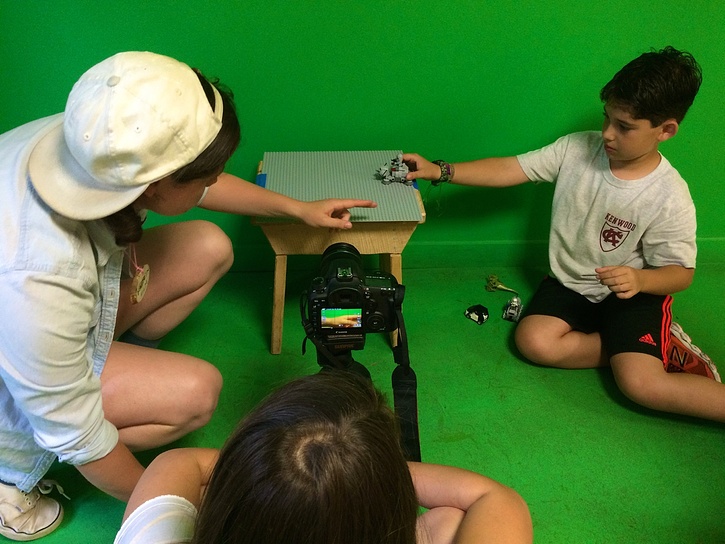 I saw it in the arts and crafts studio as well. Campers were designing masks to make their faces look like alligators, or using plastic spoons and found objects to make beautiful, one-of-a-kind dragonflies. This week’s jungle theme is really taking off! 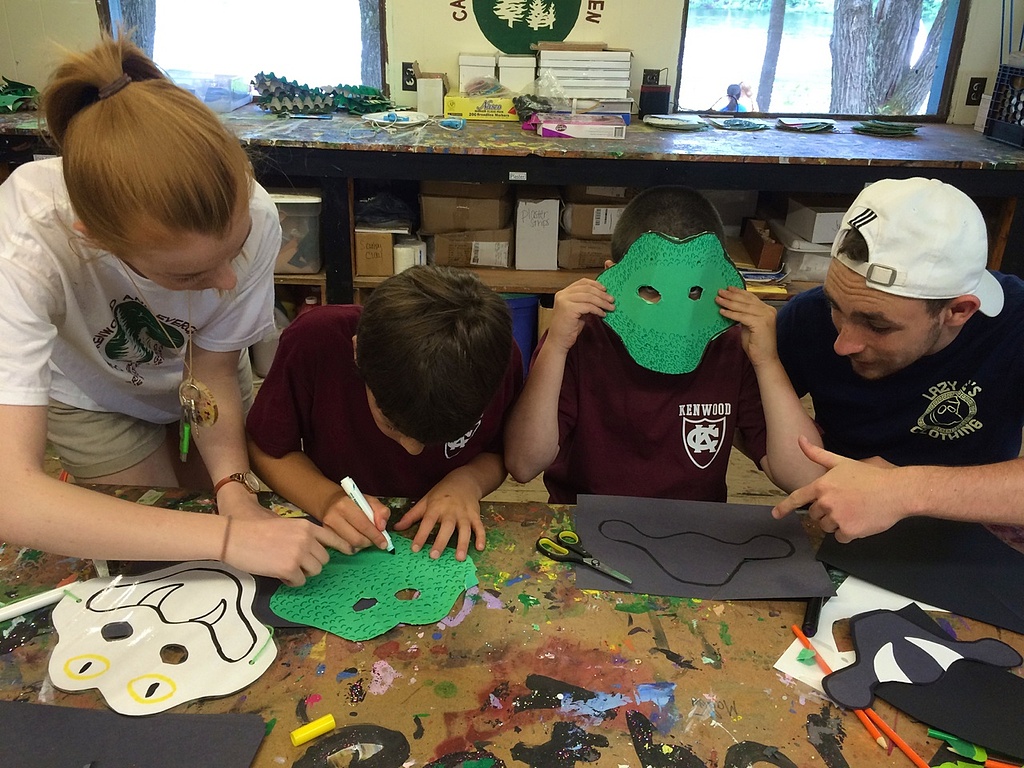 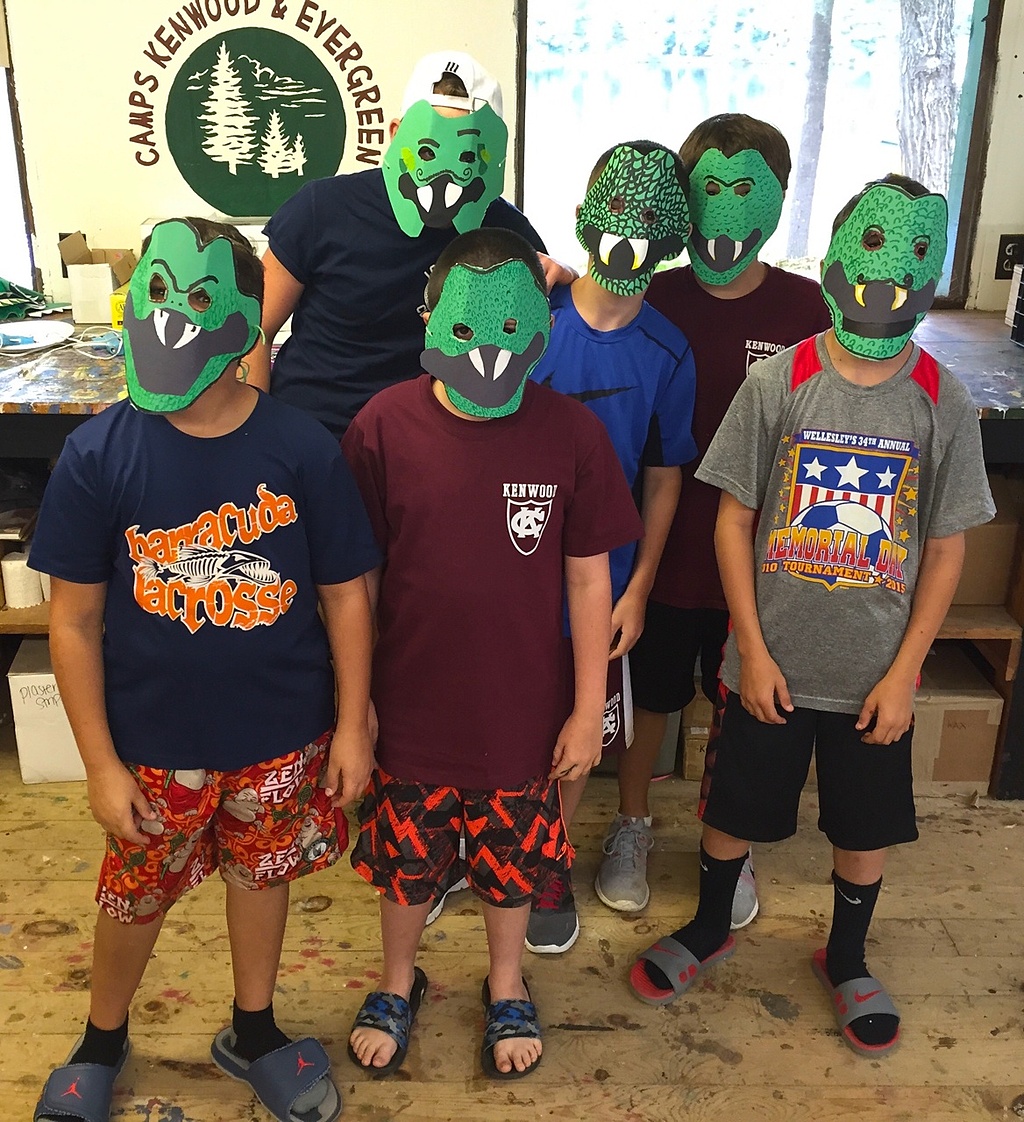 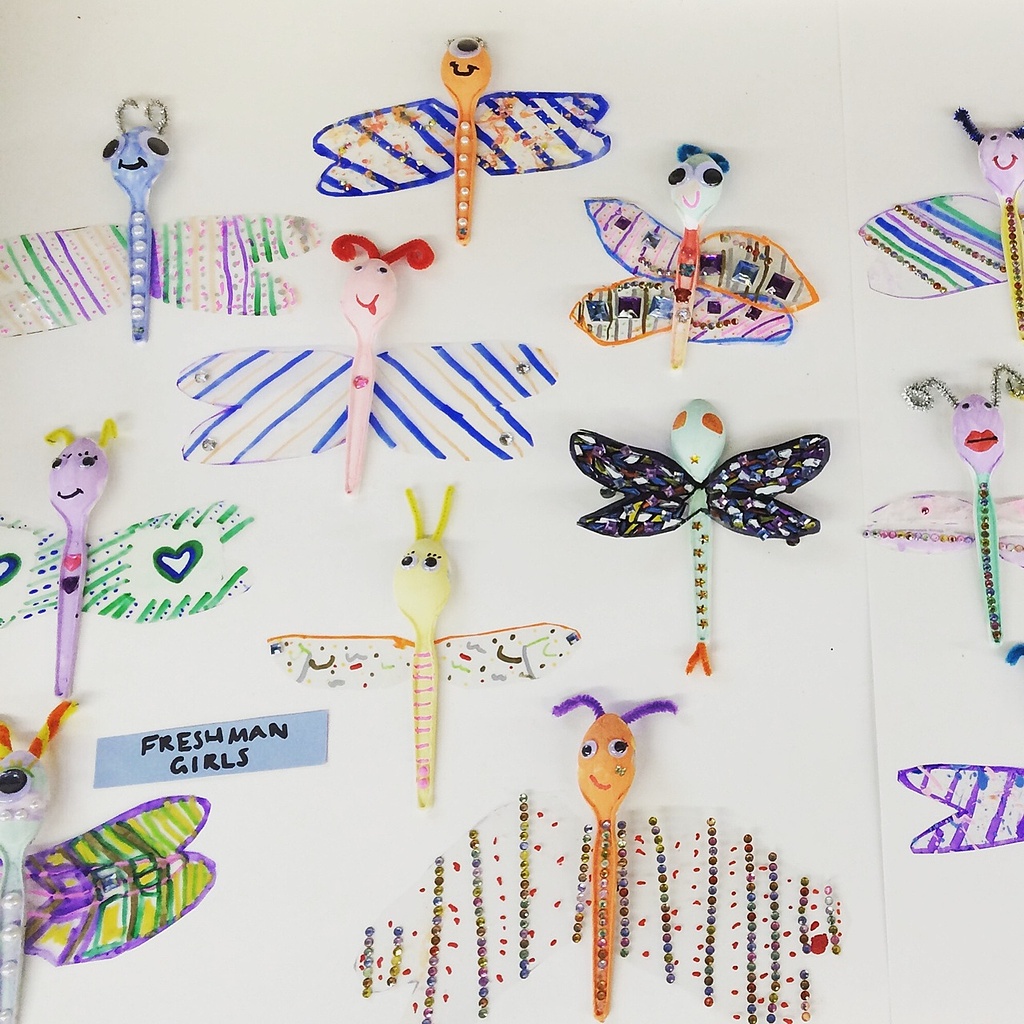 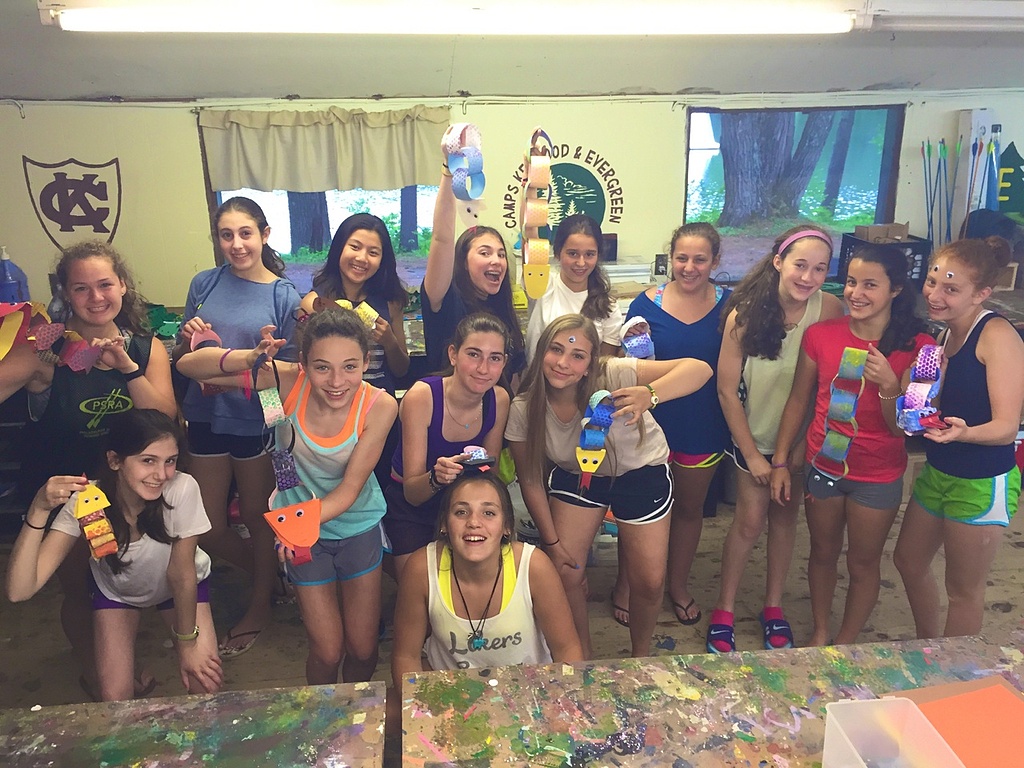 I saw some pretty cool stuff in the theater today as well. Our senior boys were involved in tryouts for their Broadway-style musical. In under a half hour they had learned to sing one of the main songs of the show, and together they sounded fantastic. If you’d like to see a short clip of their rehearsal please visit our Instagram page.

As great as our theater program is, not everyone wants to be on center stage. It can be a bit scary to act, dance or sing in front of 500 people. With that in mind, our head of theater technology, Rob Negus, ran a couple of amazing classes today in backstage tech. The boys and girls learned about what the many different cables and equipment that are necessary to put on a musical, and then had a chance to spend some hands-on time experimenting with our mixing and lighting boards. Over the next couple of weeks those who are interested will get to study lighting design, wireless and wired sound systems, and so much more! 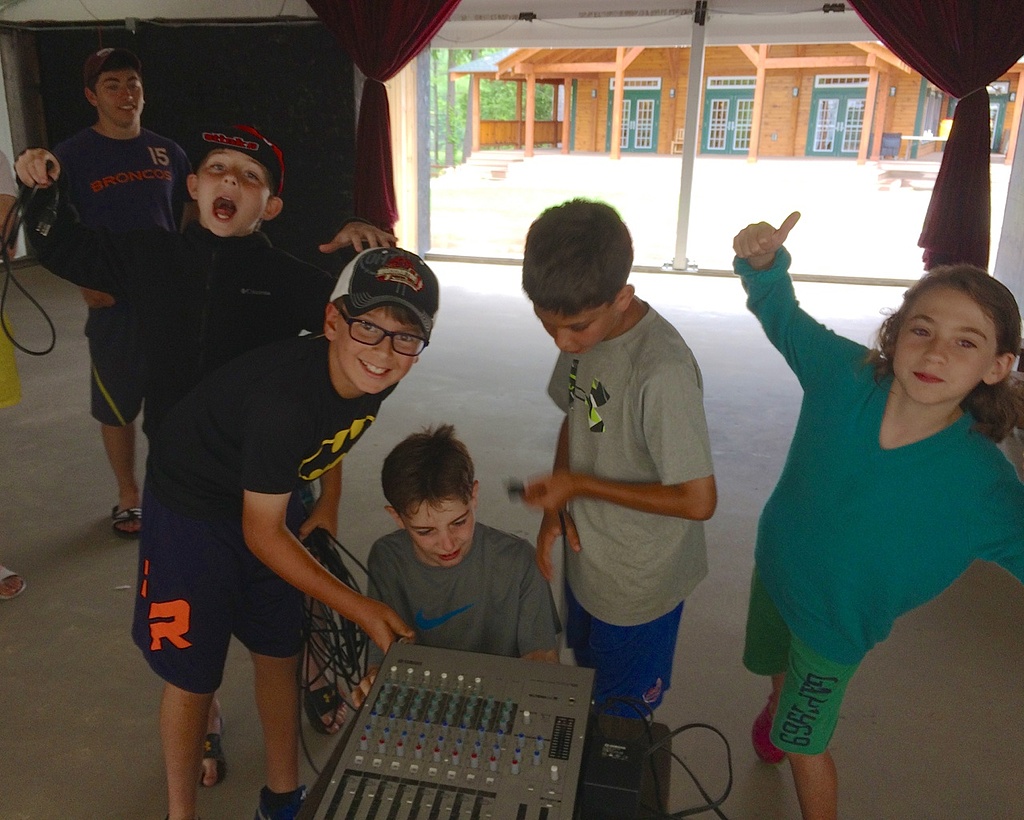 Things were also rockin’ in the music building all day. At all six periods there were bands in both of the studio rooms jamming and collaborating on their sounds. The preparations for our annual music festival, Hollowpallooza, are already underway! 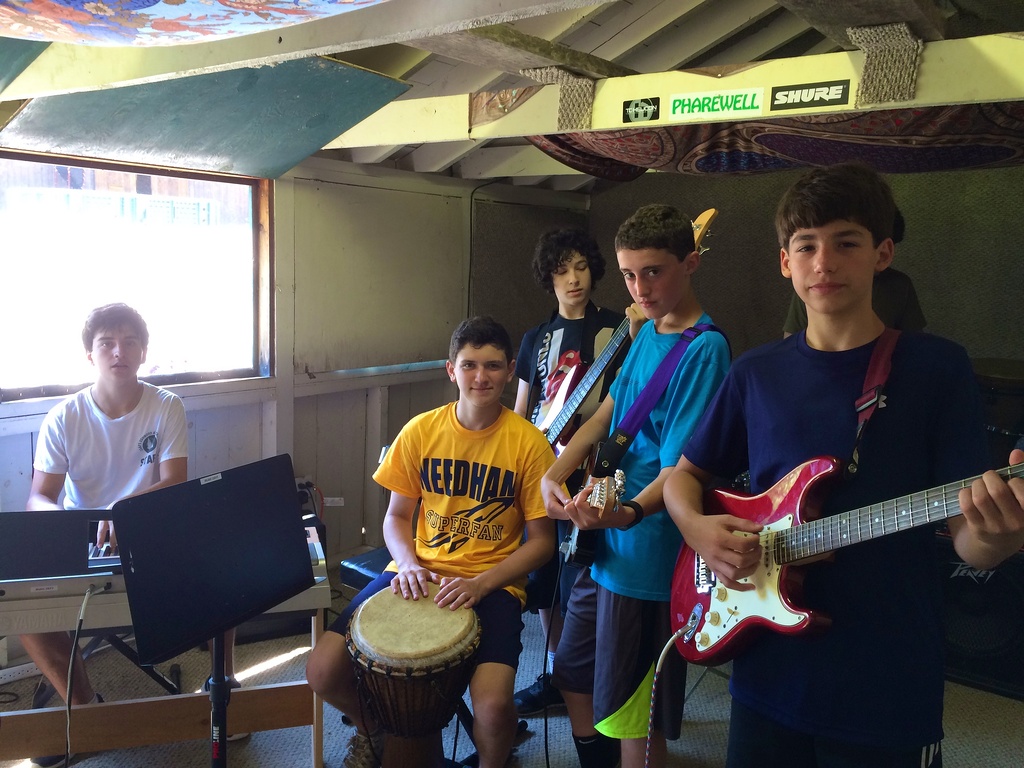 Our campers were also busy at work, today, carving wooden signs and constructing wooden furniture in the wood shop. After learning how to use the tools safely (and that they always needed to wear safety goggles), our boys and girls were measuring, cutting, hammering and chiseling all day long. 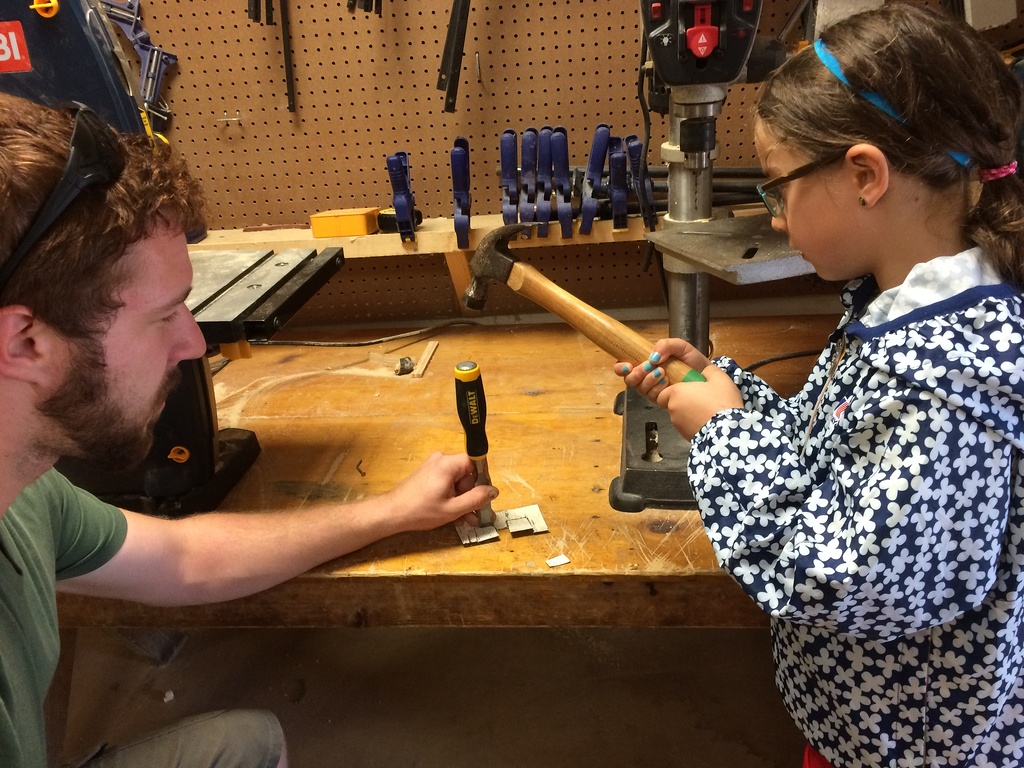 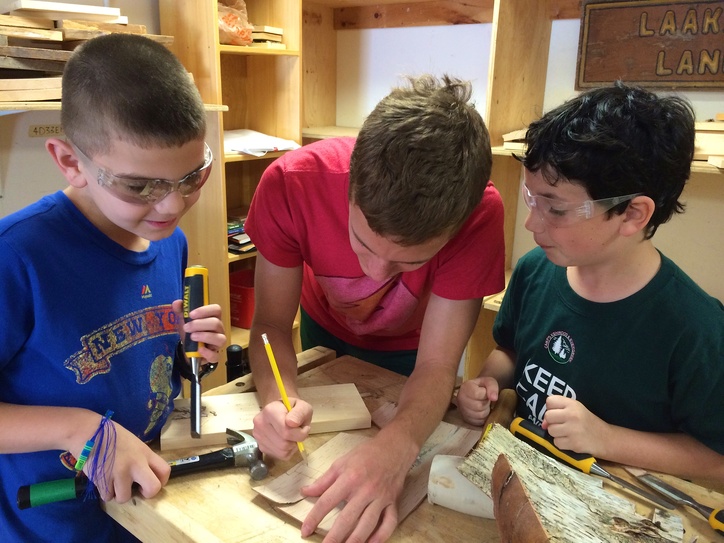 Adventure Dave began taking campers out on their first…well…adventures today. Our Evergreen seniors went to a nearby lake for some paddle boarding and relaxing in the sun. They also explored the forest around the lake, and even took turns safely jumping off of rock cliffs. It was good girl bonding time. 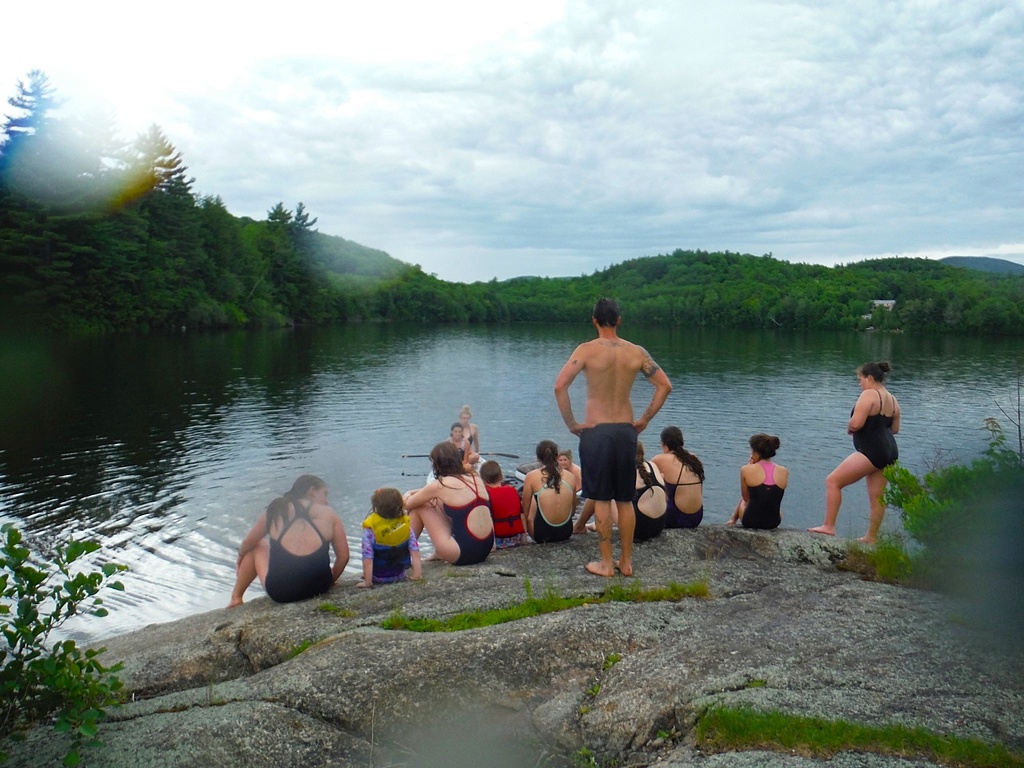 During the hottest part of the day, some of the Kenwood sophomores visited a local dam, and got to experience the fun of letting really powerful jets of water cascade onto them. When they got back to Camp they couldn’t contain their enthusiasm as they told me all about their adventure.

While I have enjoyed so much thus far this summer, I have especially enjoyed seeing how quickly our newest campers have adjusted to life here. In every age group, I am seeing campers trying activities for the first time. Many of them are finding immediate success, while some are discovering some initial challenges. Either way, what I haven’t seen once is someone throwing up their hands in defeat, or someone putting a friend down for trying. Instead, I’ve seen camper after camper learn from their mistake, grit their teeth, and continue to try mastering whatever the new skill was again. And again. And again. And each time they’ve done it, they’ve had the total support of their peers and counselors.

That’s exactly how life should be at overnight camp.