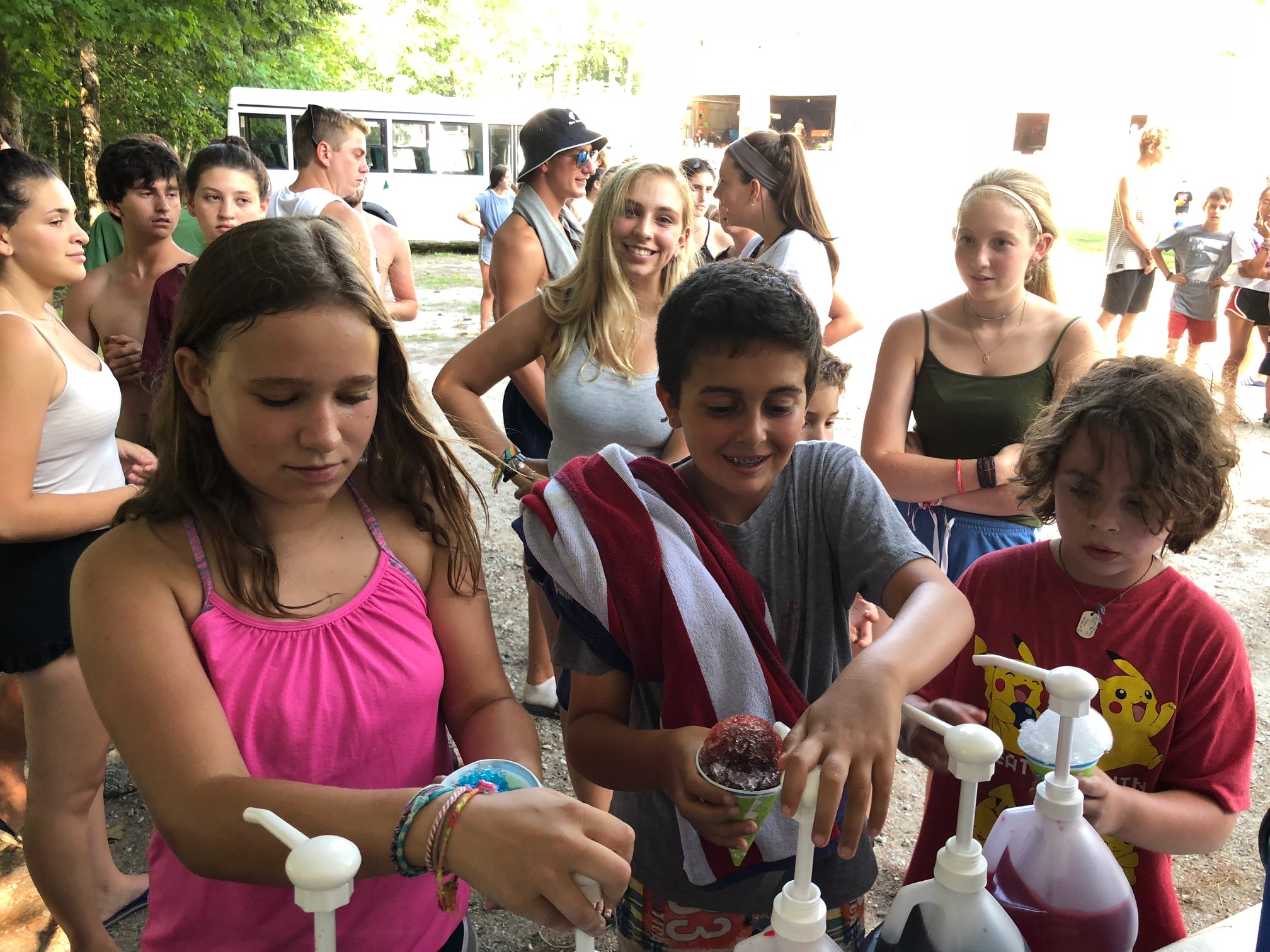 A Carnival to end an incredible weekend of Camp fun 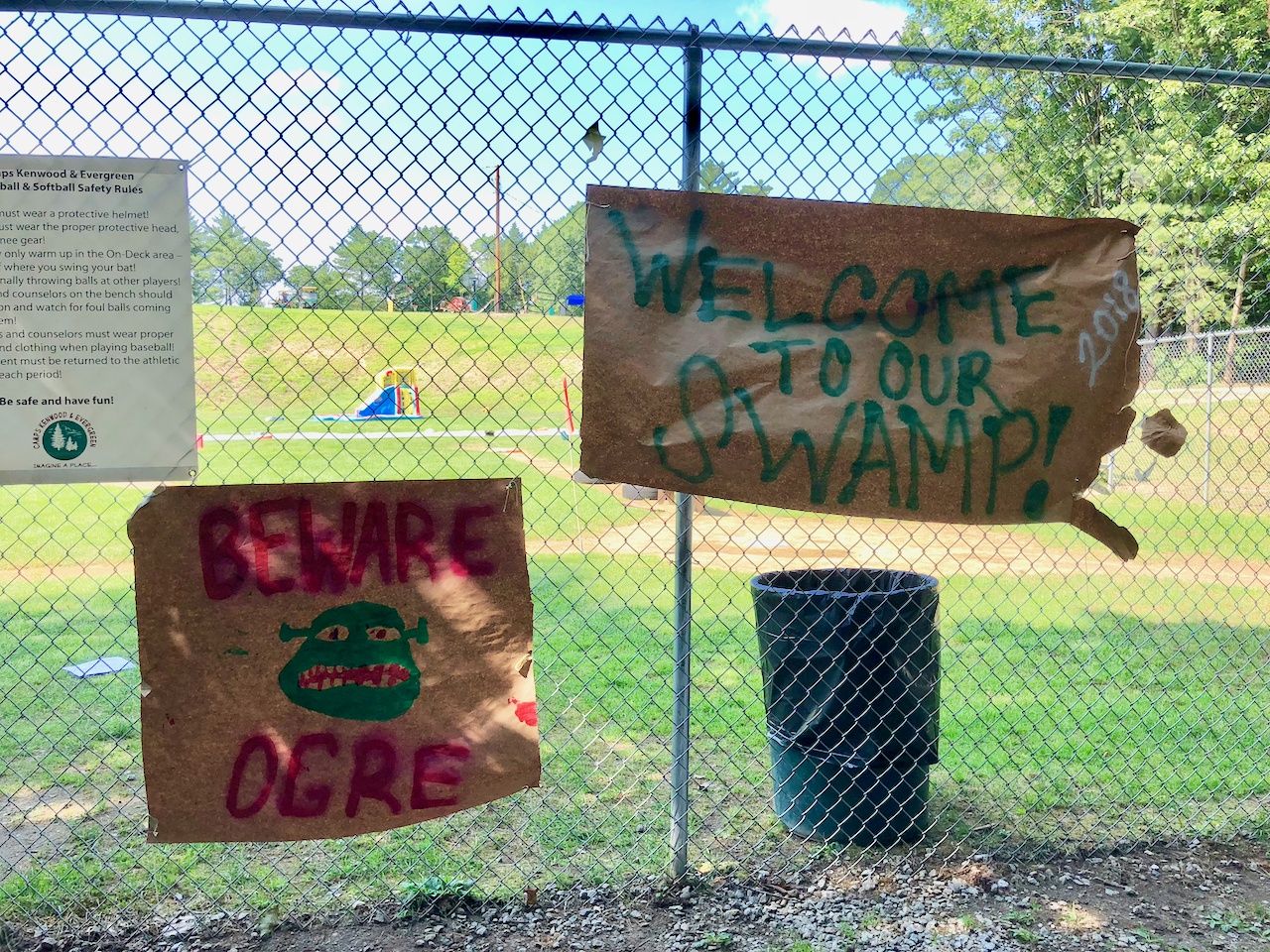 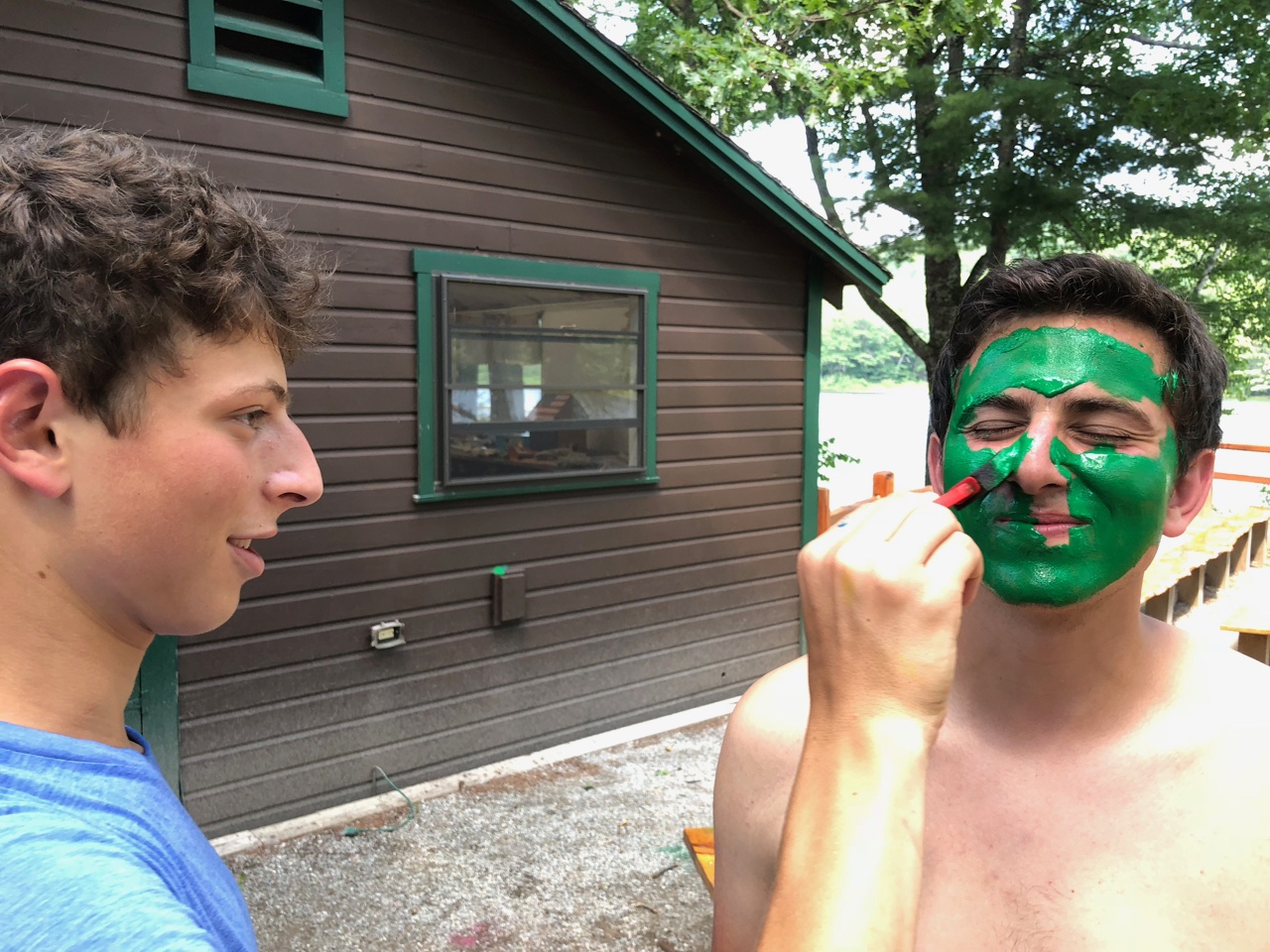 When I got to the dining hall the chefs and kitchen staff were already in the Carnival mood. They were preparing a lunch that included many of the fun foods that you would find at a carnival. After sleeping late the campers and counselors got up, had breakfast and changed their sheets. Then we all began the set up for Carnival. All morning and afternoon groups of campers were in the Arts & Crafts studio making signs for the booths their bunk would be running this afternoon, or to make costumes to wear to the start of this special event. The theme for this year’s Carnival was Shrek, and it seemed like everyone was excited to get dressed up and be silly. 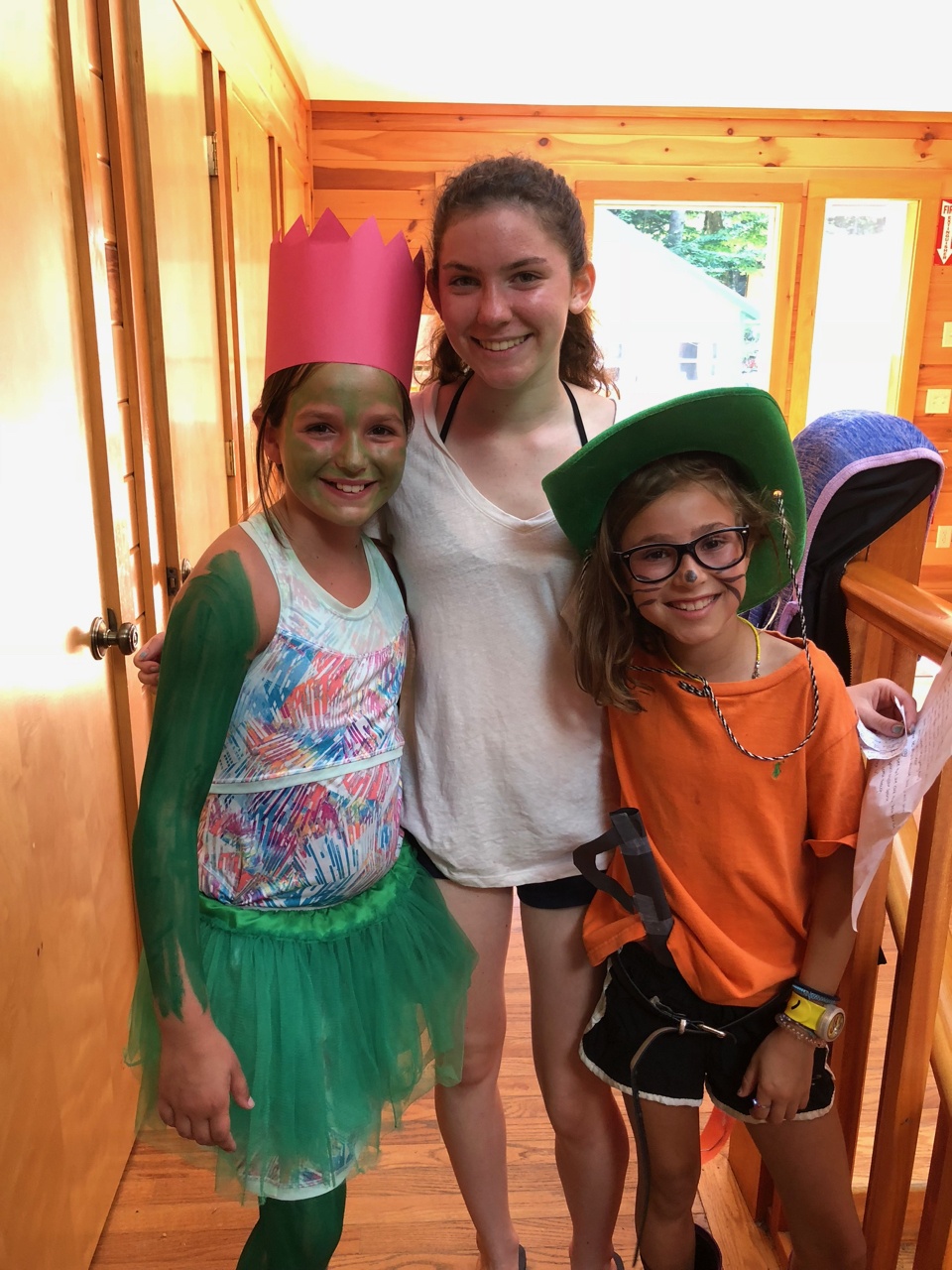 The Evergreen Big Sisters spent part of the day getting their Little Sisters ready for Carnival Elections. This meant designing costumes for each of them and then helping write a skit or song based on their little sister’s character. After lunch the whole girls’ camp gathered on the Evergreen Path to watch our youngest campers pretend to be Fiona, Donkey, the Dragon, Puss and Boots and the rest of the characters from the film. They were absolutely adorable, and all did a great job in their roles. 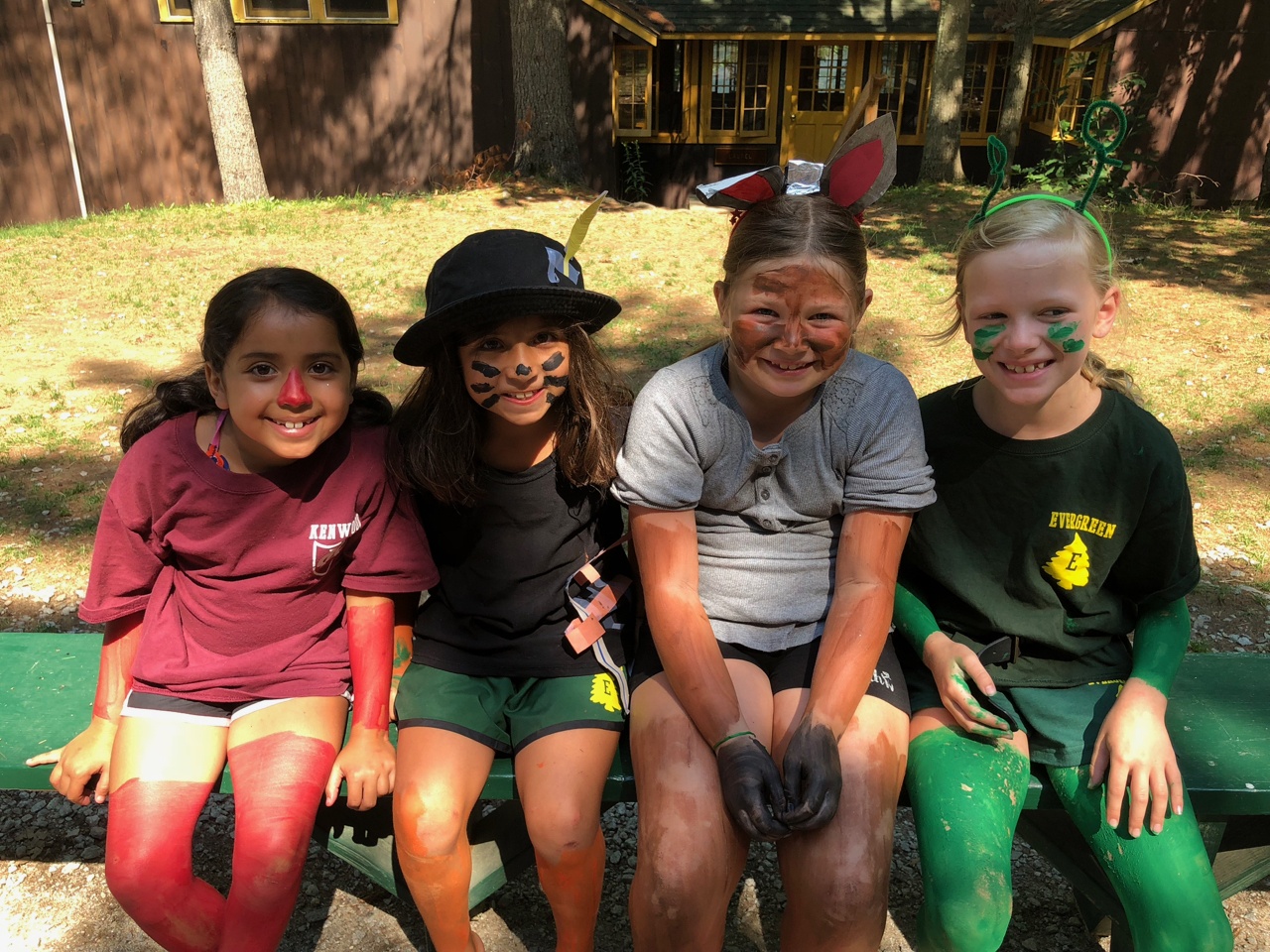 My favorite moment of today’s elections were when one of our Freshmen girls suddenly got cold feet and wasn’t sure she wanted to take part. All of Evergreen paused and let her have a moment to think it through, and when they could see her wavering further her Big Sister quietly started cheering “you can do it!” As if on cue the entire Camp began saying her name in support, along with phrases like “you’ve got this” and “we’re here for you!” Feeling the huge amount of support from her Evergreen sisters she found her inner resources and wowed the crowd with her speech. When she finished she got a thunderous applause. I will never get over how special moments like this are.

Ten minutes later the entire camp community gathered on the side of our soccer field called the Hollow. A group of counselors put on a funny skit based on this year’s Carnival theme, and which involved elaborate choreography involving camp’s golf carts and lots of counselors covered head-to-toe in red, green or blue paint. Then our Freshmen boys also had a chance to dress up as their favorite Shrek characters, and put on a very funny skit written by their Big Brothers. Last but not least, our Juniper girls put on their annual dance routine. 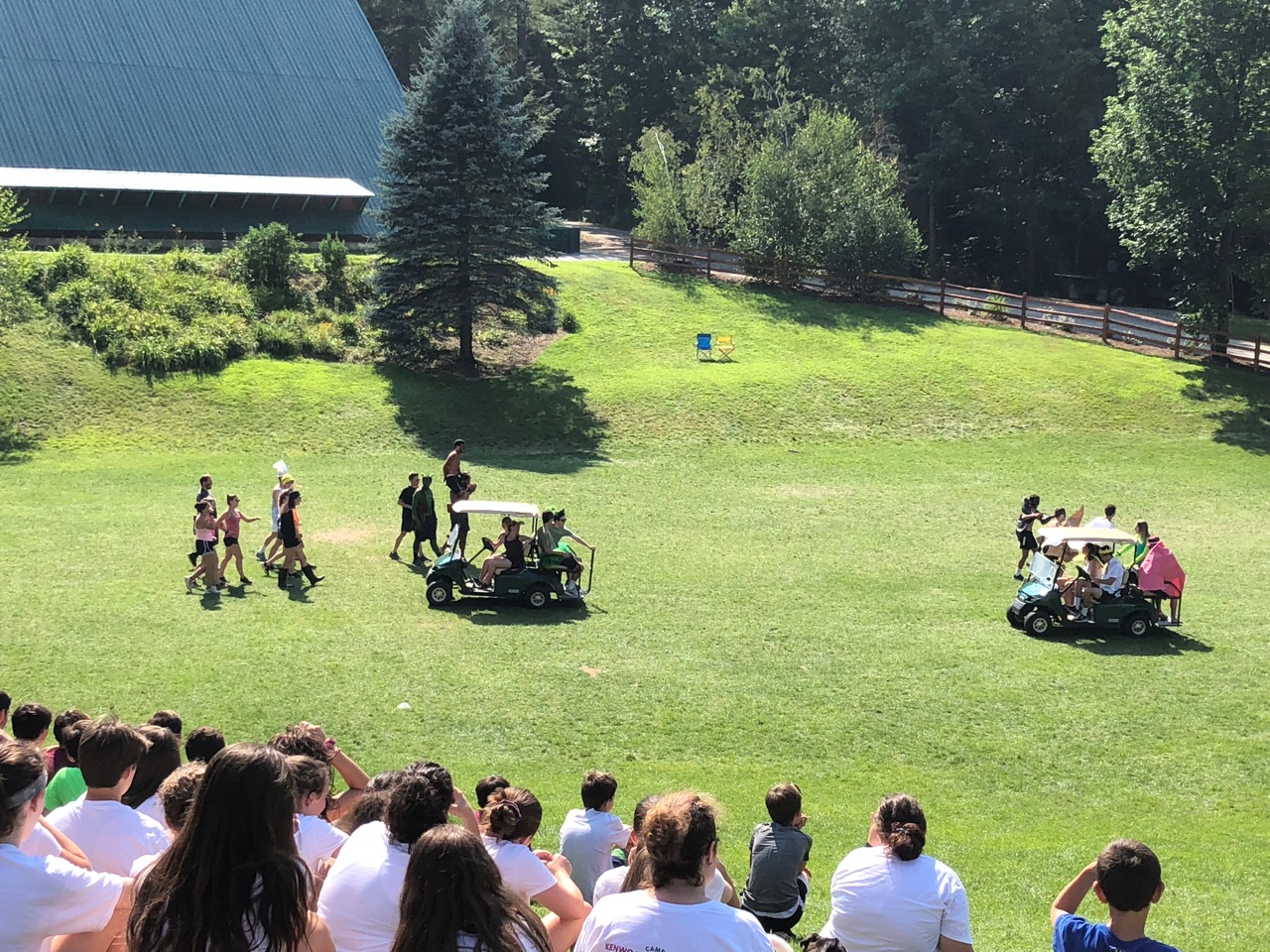 Before the Carnival opened our Hut 6 and Juniper campers participated in a camp tradition that goes back many decades. So that we could have delicious, locally grown sweet corn today they had a race to see which group could shuck their ears of corn the fastest. It was olde school fun and they really got into it! As is also tradition, once it had been steamed to perfection by the kitchen staff, our counselors took great pleasure in announcing the call to the entire Camp “FRESHMEN COOOOORN”. 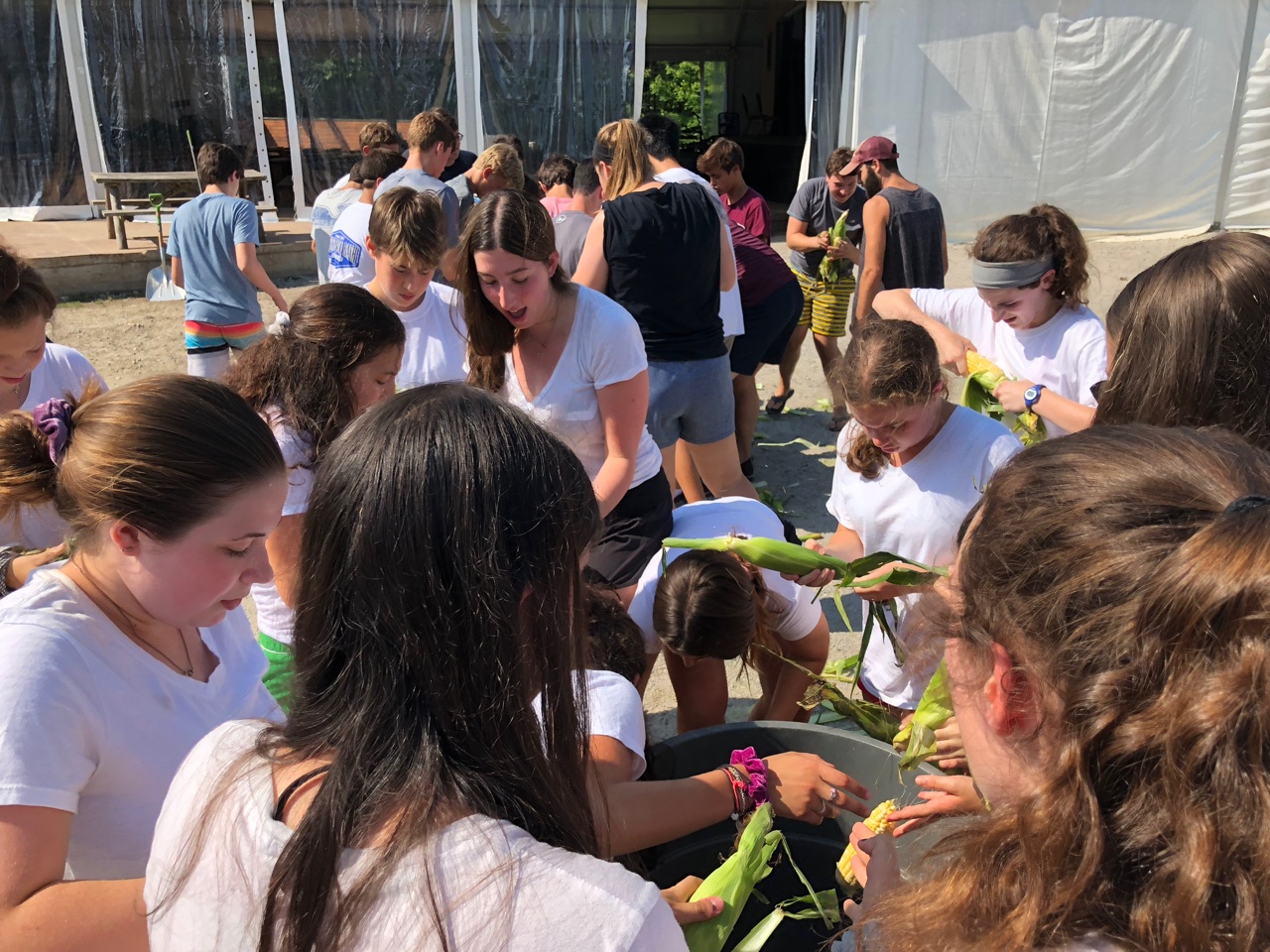 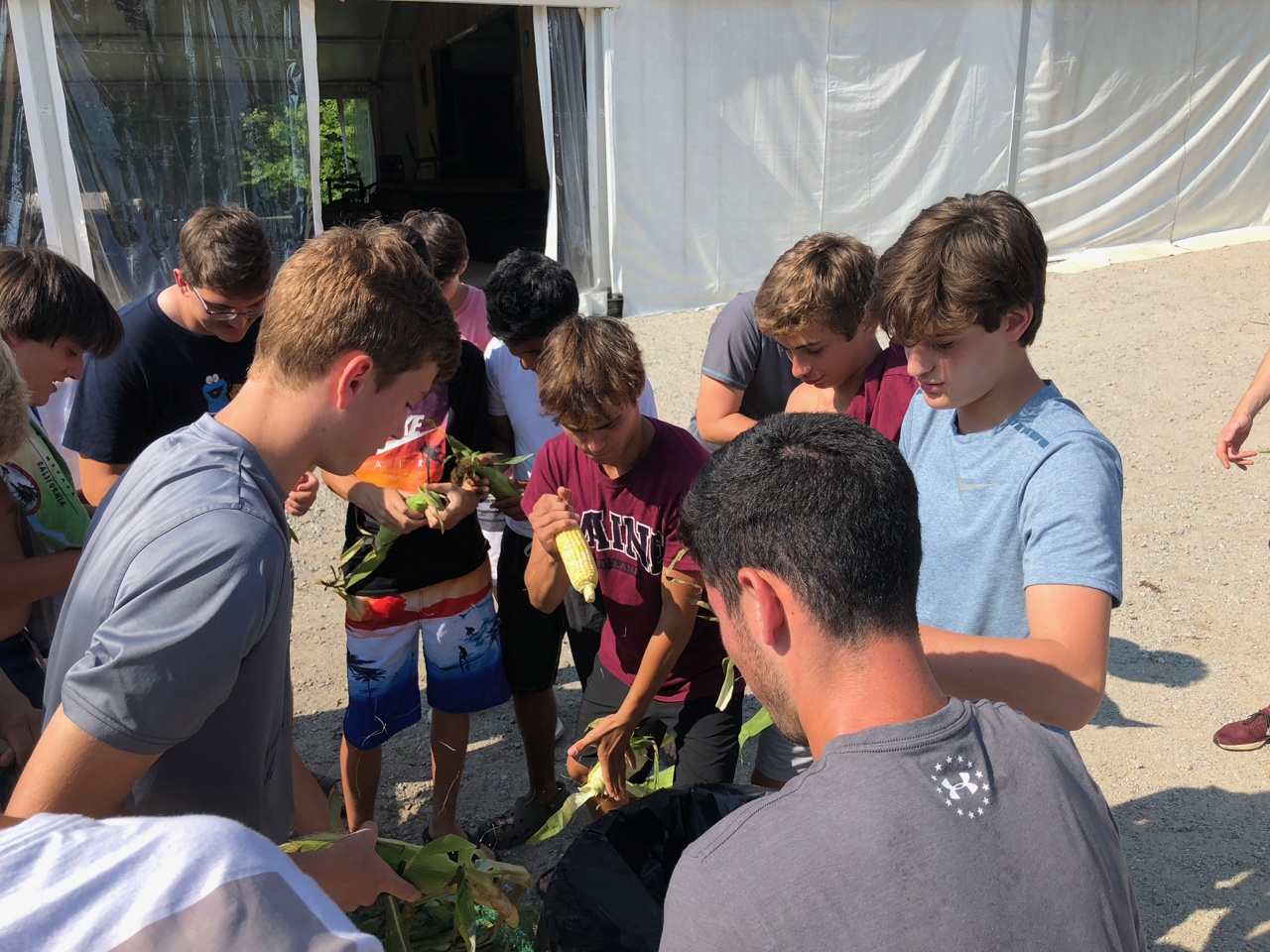 Then we all made our way to the Junior ball field for an afternoon of even more olde school games, rides, food and fun all created by our campers. The entire area was converted into a massive fairground. Counselors were serving cotton candy and snow cones, and later on popsicles and corn on the cob steamed in our kitchen. There was a waterslide, a dunk tank, and the biggest slip-n-slide that you’ve ever seen. 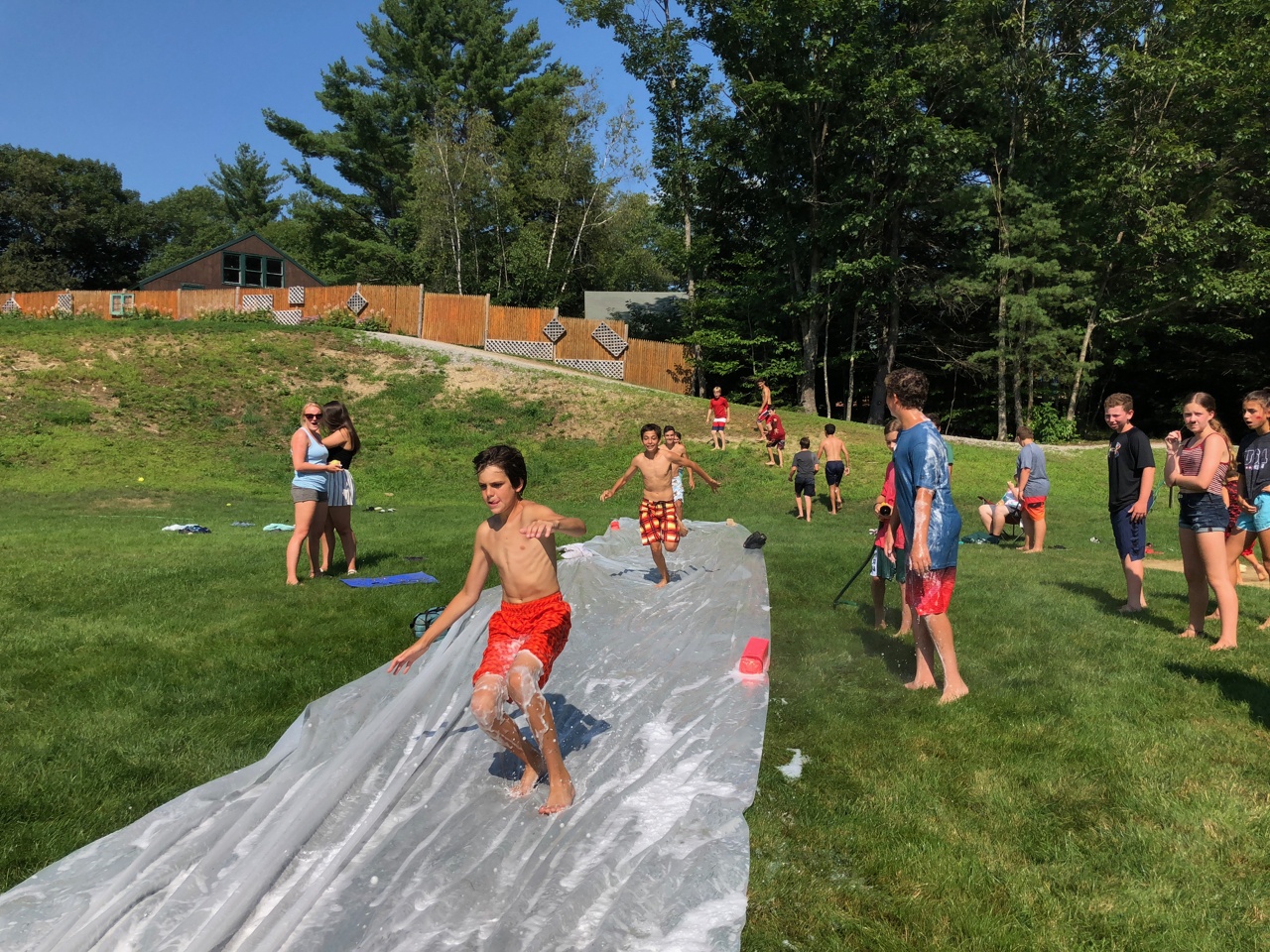 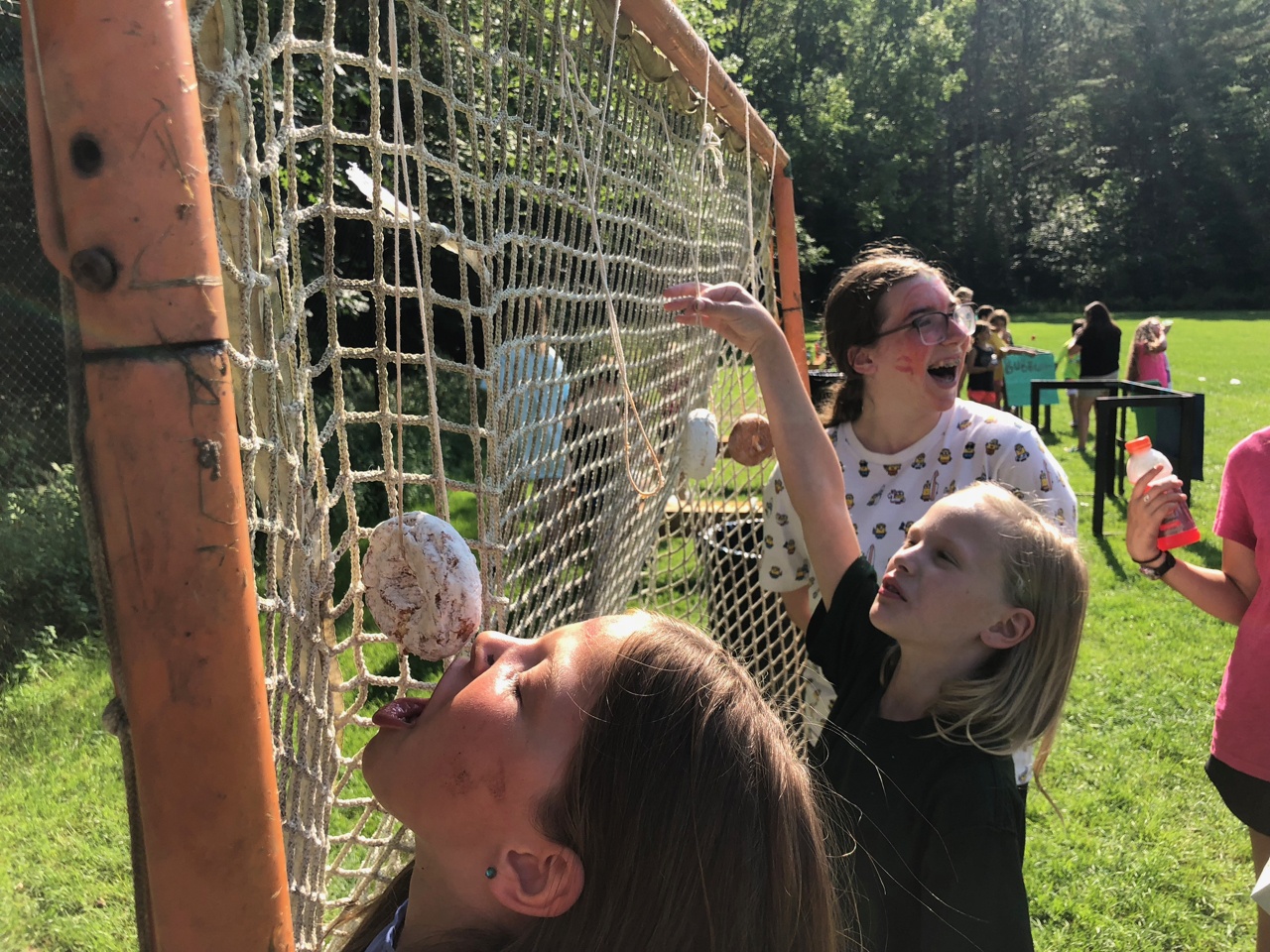 Another ran a version of the Plinko game as seen on the Price Is Right. 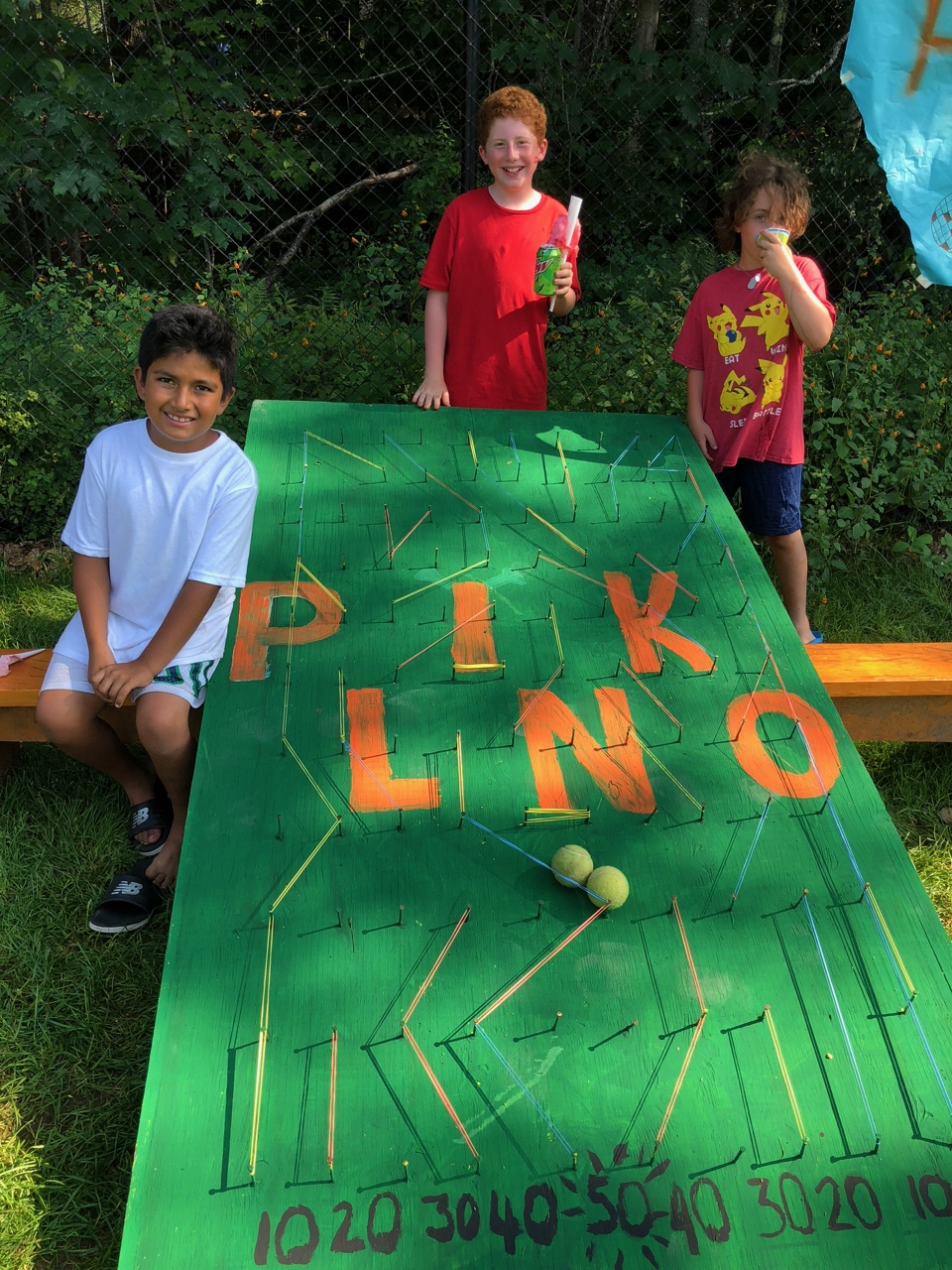 It was a great day for creativity and silliness, and for learning how to work together. Campers had to figure out how to collaborate with their bunkmates to successfully plan and execute their booth’s activity. And in the midst of doing it they were having a ton of fun, so it just felt like one more exciting, funny day of camp. 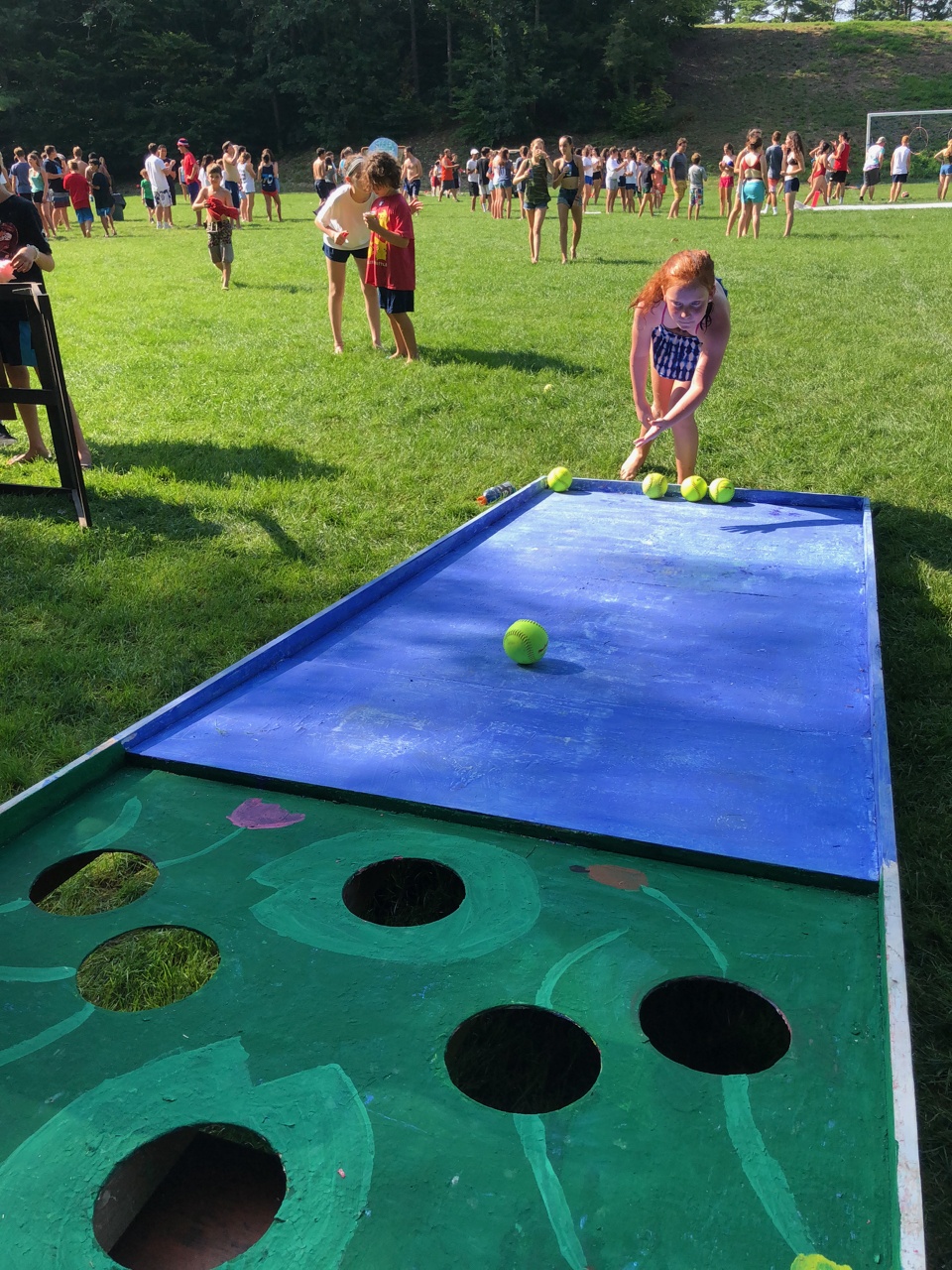 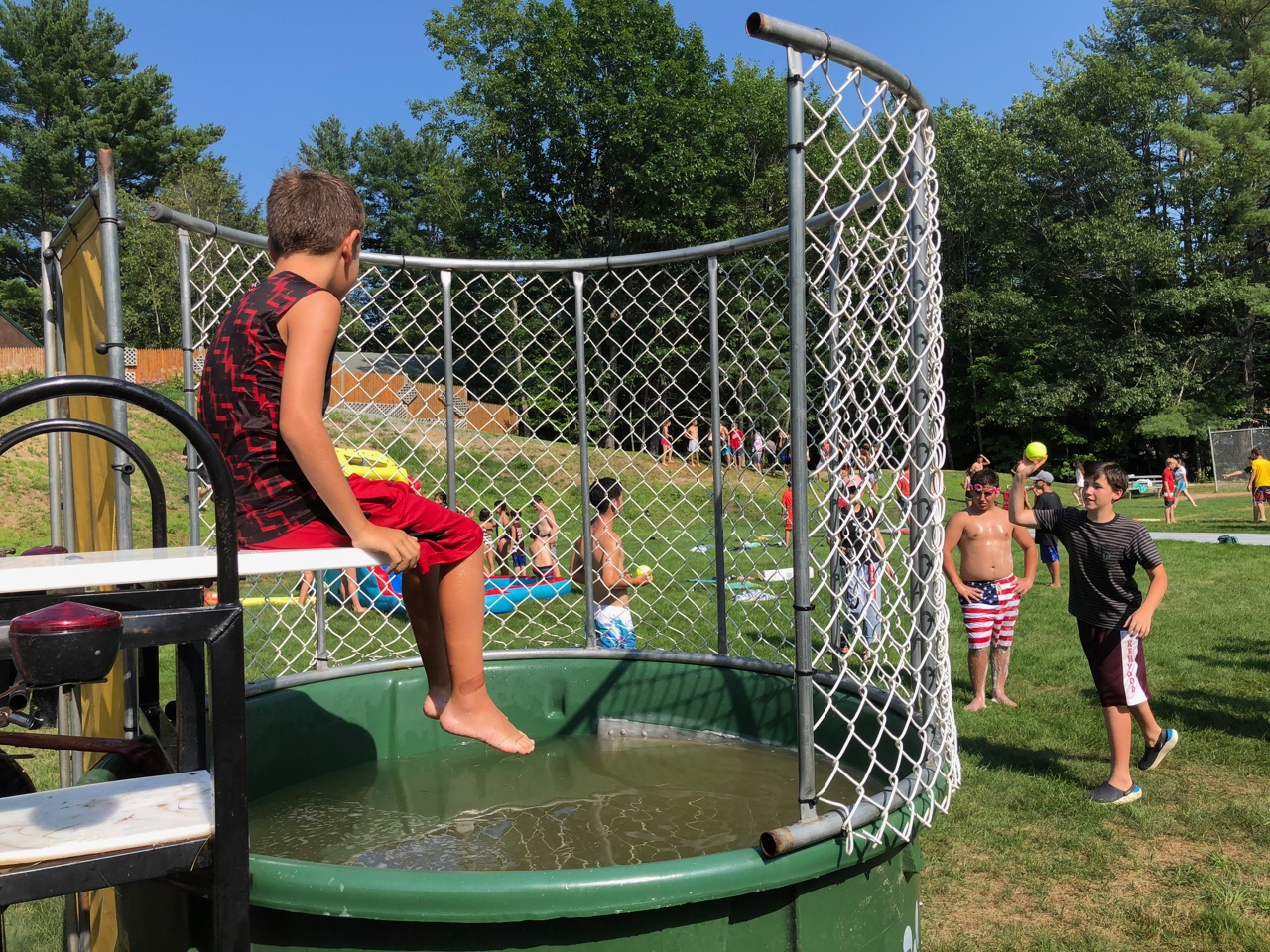 We also had a dunk tank, and the line to be dunked was just as long as the one to throw the ball at the target.  There was skee ball and face painting, guessing games, and both an obstacle and miniature golf course. There was loud, thumping pop music and friends running around together just having an unbelievably fun summer day, enjoying their unstructured time together. Special events like our carnival seem to be beloved by our campers, in part, because everything isn’t done for them. They run the booths and create the costumes, and they get such pride in being responsible for their part in it being a success. I love that our kids have opportunities like this here at our brother-sister summer camp. 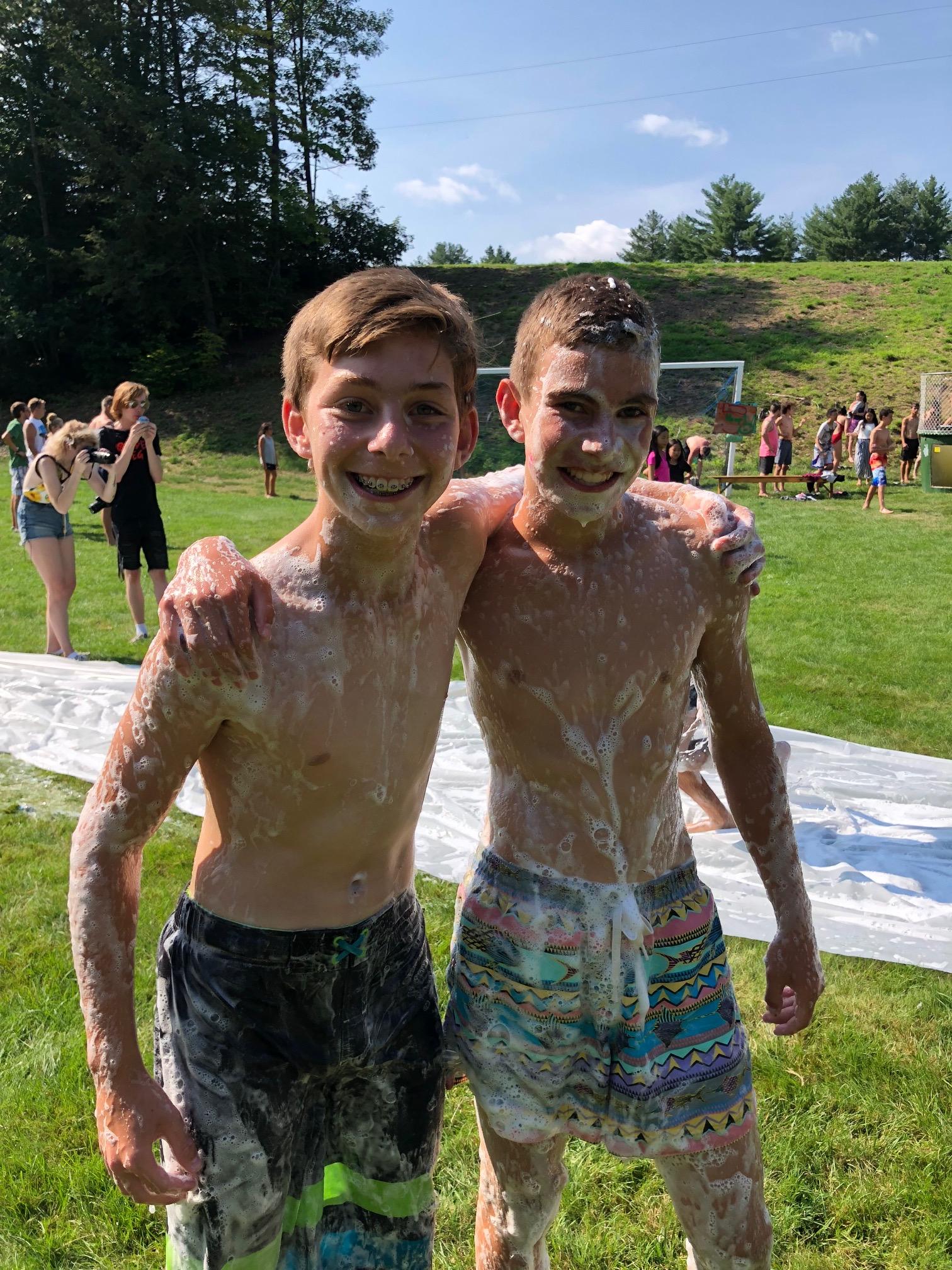 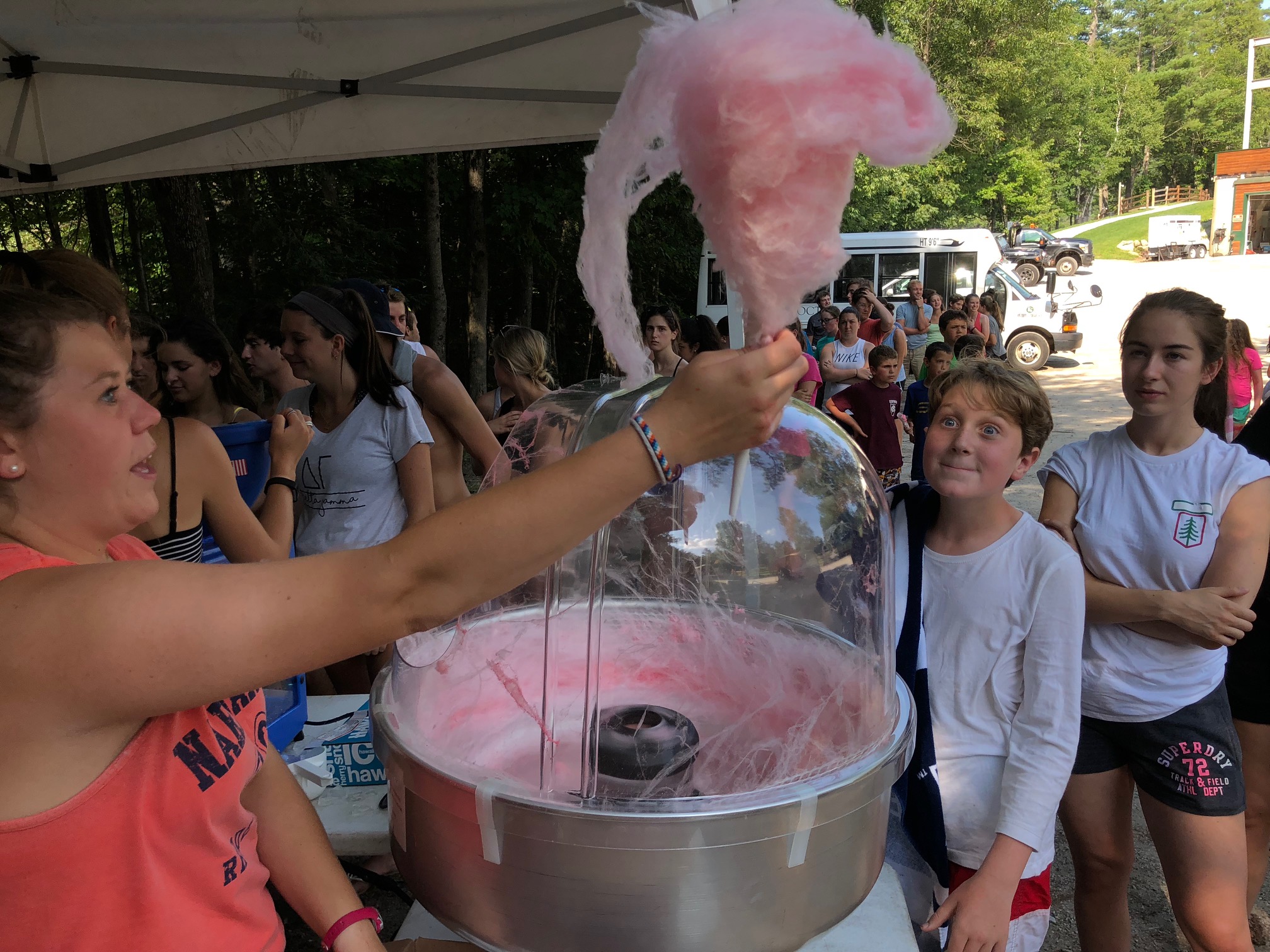 Camps Kenwood & Evergreen is known for our amazing special events, including our annual music festival, Gold Rush, Color War, All Camp Capture the Flag, Big Weekend, and so many more!