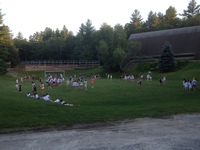 A Beautiful Day At Camp

After a couple of uneven weather days we woke up yesterday to a beautiful day at Camp. It was sunny, in the mid 80’s with a light breeze. Immediately after breakfast the camp moved out to activities with gusto, so excited by a picturesque summer day. I saw campers proudly wakeboard and tube for the first time, while dozens of kids covered the tennis and basketball courts for lessons.

Many of our traveling sports teams were out and about. Our Evergreen 11’s Soccer team spent the day playing camps from around the state, and while they did not come home with the scores that they were looking for they played their best. Our Evergreen 15’s Volleyball team faired better, winning most of their games in some very tough competition. Our Kenwood 14’s Basketball team headed to an all-day tournament, where they proudly came in 3rd. Enjoying the hot weather, the Kenwood Swim Team competed against about half a dozen camps, and we are thrilled to announce that they came home with a number of first place wins!

In the afternoon the Kenwood Big & Little Brothers had their bowling and ice cream trip. It was hard to tell who was more excited! In both Kenwood & Evergreen the bonding between our Big and Littles is so heartwarming to see. It’s incredible how quickly these friendships develop into something deep and meaningful. 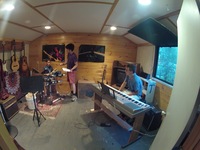 In Kenwood the evening activity was one of my favorites: Hobby Night.  Campers had the chance to pursue their passions, and get extra special attention from the coaches and teachers who run our activity areas.  Campers were jamming in the music rooms, fishing, waterskiing, filming a documentary, creating comic books, making plaster masks of their faces, baking in the cooking lab, building model rockets, creating furniture, taking swings in the batting cage, jumping off of the zip line, learning to cradle in lacrosse, shooting hoops and arrows, and doing so much more.

While Kenwood was hobbying Evergreen was running its hearts out at its own Capture the Flag event. As the person in charge of picking the teams, Jacki, our athletic director, always wants to create the fairest, most balanced ones possible. She knows it’s more fun for everyone. At the half last night one team had 640 points…while the other had 650. The gap widened by the end, but only by a little bit more. As they walked off of the field I watched our girls on both teams proudly wrap their arms around each other. I so love the spirit of this place.

After a very full and fun day at the end of the night the Evergreen administrators took our oldest campers — a group called “Juniper” — out for a night of bonding and pizza. Deena, Phyllis, Jacki, Mia and Courtney have been a part of our Juniper girls’ lives for years now, and for most since they were 8 and 9 years old. They are so proud of who our girls have become, and relished having them all to themselves, if only for a couple of hours.

What a wonderful, beautiful day at Camp.