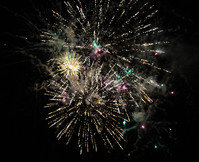 4th of July at Camp

The 4th of July is a huge event at Camps Kenwood & Evergreen, and this year was no exception. With all of our big plans we woke up with a bit of surprise: our entire town had no power! Thankfully, we really like to be prepared for anything that might happen, so a few years back we bought a massive portable generator for contingencies just like this. Within 5 minutes of discovering that the power was off Scott had turned it on, and immediately power was restored to our dining hall, offices, campus-wide PA system, and our entire water system. Our kitchen never missed a beat, and a terrific breakfast of eggs, bagels, hot cereal and a whole lot of fresh fruit was ready to go. Thankfully, power was restored to the town by about 9am, but we were more than prepared had it taken longer. After so many years of talking about learning to be resilient in a crisis even our youngest campers were saying to me “we knew everything would be great. That’s Camp!” Absolutely, guys.

So even with the power off in the bunks a great many of our campers came to morning assembly prepared to celebrate the holiday.  Some were decked out in combinations of red, white and blue.  Others wore shirts with American flags on them.  Others had elaborate costumes (including a few capes and sunglasses painted to look like American flags).  My four year old decided to join in the fun and dress up as Captain America, complete with a mask and shield. After having an all-camp discussion about the meaning and goals of our Constitution and saying the Pledge of Allegiance we raised the flag and began our day.

It was a busy day of campers engaged in every activity that we offer here.  The weather was sunny and very hot, and we all enjoyed getting into the lake.  A group of Kenwood Sophomores tried waterskiing for the first time, and a bunch of them were able to stand up and circle around the lake.  As they returned from the waterfront they were cheering with great pride.  I spent part of the morning watching an Evergreen Freshmen Softball practice.  Already I can see how much they have learned this summer, and how much their skills have improved!  Later in the day, just after lunch, I watched Mia run a fabulous Softball pitching and hitting clinic with a group of Senior girls.   Later in the day I also watched the Kenwood Seniors have a fantastic Touch Football team tryout on Senior Hill, while some Kenwood Sophomores took a Basketball lesson or played Newcomb.  When the Kenwood Inters went to Archery I got to watch each of them hit the target, and I also saw Junior boys and girls learn to tie dye in Arts & Crafts. Some Kenwood Freshmen spent part of the morning in Ceramics making their own custom made cereal bowls.

One Thursdays our lunch is called Deli Day. For one meal we switch from family style to buffet, and the entire Camp has a massive picnic outside. Everyone was so happy sitting together, chatting, laughing, and eating cold cuts and freshly made salads. As always we had vegetarian options for our friends who don’t eat meat, along with a special buffet line for our friends who eat gluten, dairy, soy and egg free!

After more great activities in the afternoon we then hosted our traditional 4th of July BBQ.  Our Kitchen staff put out an amazing feast with hamburgers, hot dogs, veggie burgers, steak tips, chicken, an assortment of salads, fresh baked cookies and watermelon. The entire Camp hung out together on the grassy field we call the Hollow.  Afterwards, campers and counselors were throwing Frisbees and kicking the Soccer ball around, or just hanging out, sharing a moment with friends.  Towards the end of the meal the weather service informed us that a lightning storm was approaching, so we moved everyone back to their bunks to wait it out.  Once we got the message that all was clear we brought everyone back to the theater for the big event of the day…

Nancy Tucker!  For those new to our community our good friend Nancy Tucker is a dynamic, engaging guitar player/singer who has been performing at Kenwood & Evergreen’s July 4th celebration since the mid-1980’s (I believe that this was year #28).  For almost 1 1/2 straight hours she sang funny songs, classic tunes and renditions of current pop hits.  I simply cannot adequately describe the excitement and enthusiasm that this event creates.  Campers of all ages arrived with handmade signs sporting slogans like “I Fancy Nancy” and “Nancy Is A Living Phenomenon”.  A group of Evergreen campers silk screened messages of love to Nancy on white t-shirts.  Our Hut 6 Senior Boys proudly joined her on stage to join her in singing a tune, and then our Juniper girls did the same towards the end of the concert.  Campers and counselors danced all night, singing at the top of their lungs.  I love how spirited our kids are, and how quickly they can come together as a community and celebrate a special moment.

As camp directors we are always concerned about the physical and emotional safety of our community, and lightning is certainly a hazard that we take very seriously. Because of this, we have invested a significant amount of resources in having 24/7 phone access to meteorologists with the National Weather Service. Whenever there is even the potential for lightning in our area our cell phones receive text messages warning us about how far away the storms are, and in which direction they are moving. And then from a very handy app we are able to watch the satellite data for our area in real time. It’s quite amazing and well worth the tremendous cost! So in the midst of the Nancy Tucker concert last night we got word that there was a potential storm in the area. Scott got on the microphone and explained this to everyone, along with the fact that there was nothing to be worried about. So our kids kept on rockin’. But we wondered if we would have to reschedule the night’s fireworks display. At about 9:30 Scott spoke with our contact at the NWS, and we got the word that the lightning had moved in another direction. Thus, we were safe to take the kids to the Evergreen beach and start the NEXT show.

The entire Camp community sat together on the beach while our Maintenance team launched a breathtaking 25-minute fireworks display. With each pop and boom the crowd “oohd” and “ah’d”. When ordering the fireworks this year I had told the manufacturer that I wanted the finale “to be awe inspiring”. And that, I must say, it was. The last 5 minutes were a non-stop barrage of lights and sounds, and the whole beach cheered at the top of their lungs for Peter, our facility manager, and Tex, our Trip Coordinator, who put on the display.

With the night coming to a close we stood together in the darkness, held hands, and sang our traditional end of day song called “Taps”.  “Day is done, gone the sun, from the lakes, from the hills, from the sky. All is well, safely rest. God is nigh…” After 30 years of being here I’m not sure that I can remember a better 4th of July.